Having been approached by numerous readers about the documents released by Wikileaks, Voltaire Network considers it necessary to put the issue in the right perspective. Voltaire Network hereby denounces a political diversion operation orchestrated by the media and reaffirms the illegality of the war in Afghanistan. 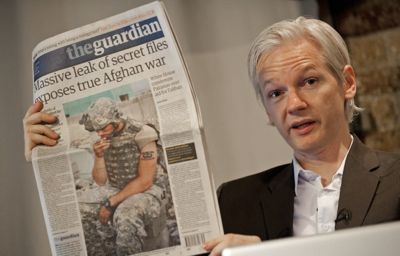 A few weeks ago, Wikileaks.org passed over a series of secret military documents to three major newspapers (New York Times, The Guardian and Der Spiegel) for assessment and publication.

On 25 July 2010, in the biggest document leak in military history, Wikileaks released an archive of 92 000 original documents simultaneously with the publication of the story by the three media outlets.

The documents, used by forces deployed in Afghanistan, consist of military field reports describing combat situations or recording information. They represent a low degree of confidentiality, which means that they have been through many hands, whereas their high quantity suggests that no more than a handful of people could actually have processed them. Their authenticity is not in question. The media worldwide as well as numerous political leaders have commented on the analysis and conclusions published by the three newspapers, accepting the information as bona fide.

Our detractors no doubt expect Voltaire Network to rejoice over these leaks and to seize on the documents to attack U.S. forces, accusing them of war crimes and incompetence. We shall do nothing of the sort.

In fact, everything leads to believe that the leak was orchestrated by a clique within the U.S. state apparatus to vent its views in synchronicity with General McChrystal’s dismissal by President Obama. The fact that Obama has blocked any internal investigation to identify the source of the leaks indicates that the source must be known to him and that he has either no interest in tackling this matter or that he approves of it.

The documents do not reflect the reality on the ground, but they do attest to the degree of self-deception and disinformation on the part of U.S. forces. The Afghanistan field reports, that informed NATO’s operations in that country, contain nothing but inane gossip, leaving one bewildered as to how such informants could have been taken on board. It is downright preposterous to point to a 74-year old Pakistani officer, retired General Hamid Gul, as being the brain behind the insurgents and single-handedly responsible for NATO’s military fiasco.

Votaire Network is not surprised to see the three aforementioned newspapers - reputed for their staunch alignment with the Atlanticist bloc - take part in a psychological operation aiming to disparage a recently-ousted general in order to exonerate others from the political responsibility of this human tragedy.

Moreover, considering their consistent parroting of Washington’s lies throughout the years, the unanimity of the mainstream media on this issue should be regarded with caution.

The Afghanistan war is illegal. Whether we find them likable or not, the insurgents are excercising their inalienable and legitimate right to defend their country from foreign occupation. It is not simply the blunders of any given military unit that constitute a crime; it is the sum total of all the operations executed on the ground, up to and including the mere presence of foreign troops inside the country.