The Bizarre Background of the ‘9/11’ New York Mosque

With his habitual acumen, F. William Engdahl peers behind the scenes of the Ground Zero Mosque and the Koran burning hullabaloo. He detects a geopolitical manipulation, ultimately serving to reinforce the US Government’s narrative of the disintegration of the WTC towers and to lend credence to the underlying crusader ideology of the "clash of civilizations". All of it tying in with the need to justify US military occupation in Iraq and Afghanistan, and the expanding militarization of the region. 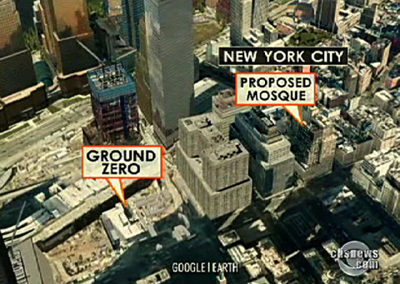 For days the headline in US and even world news has been whether or not a fanatic Christian preacher from a tiny Florida church will or will not burn the Moslem Koran in protest to the announced plans to build a mosque 400 meters from the site of the World Trade Twin Towers. Conveniently, the drama was focused on the 9th anniversary of the collapse of three (not two as widely believed) towers on September 11, 2001. Now details about the real estate group that is allegedly ready to invest $100 million in the mosque construction suggest that the entire drama is being deliberately orchestrated. The question is by whom to what ends?

In a move to maintain high drama, on September 10, bombastic New York real estate wheeler-dealer Donald Trump made public his offer to buy out the prime owner of the proposed Islamic Center for “patriotic” reasons. The deal was reportedly rejected categorically by Hisham Elzanaty, an Egyptian-born businessman who says he provided a majority of the financing for the two buildings where the center would be built. Here is where it begins to become interesting.

It turns out according to investigations by various New York newspapers that the property is registered not in the name of Elzanaty, but of an entity called Soho Properties, a real estate company at 552 Broadway, New York, New York. According to their website Soho Properties was founded by Sharif El-Gamal in 2003. The website describes their activities: “We are a company focused on pursuing the real value in real estate investments, especially when pricing dislocations create value-driven opportunities. Soho Properties unlocks the value in an investment by successfully executing various strategies, which include re-tenanting/repositioning assets, renovations, aggregations, developments and participating in unique opportunistic situations.” [1]

Who is Sharif El-Gamal then? It seems, according to various New York police records and the research of a Florida private detective on behalf of clients who claim to have been defrauded by the El-Gamal group, that Sharif El-Gamal has a rather dubious background, for someone who is the mogul of a $100 million real estate deal. Sharif is in a partnership with his brother, Sammy El-Gamal, and Nour Mousa, nephew of Amr Moussa, an Egyptian diplomat and the Secretary General of the Arab League.

In November 2009, it was reported that the firm spent $45.7 million to buy 31 West 27th Street in New York City, a 12-story 10,000 m2 office building. El-Gamal said: "We just bought it for the income. It’s got great long-term leases, and the financing was really attractive.” In a depressed New York real estate market, the El-Gamal brothers seem not to be such shrewd businessmen. They reportedly bought it from the Witkoff Group, which had bought the building in 2006 for $31.5 million, during the book in New York real estate. [2]

Then in July 2009, Soho bought the 47–51 Park Place building on the site of the planned Cordoba House, now referred to as the "Ground Zero Mosque" and "Park51", to allegedly build a $100 million, 13-story, glass and steel Islamic cultural center and mosque that is in the planning stage. Soho Properties paid the owner $4.85 million in cash for the property.

The question being asked is where did the large sums of money come from for the two El-Gamal brothers? It seems they are anything but your typical New York millionaire real estate tycoons. Their backgrounds suggest more apprentices in a new Godfather film as petty mobsters-in-training.

According to an article in the New York Post, Hisham Elzanaty, one of the money men behind the developer of the “Ground Zero” mosque was sued for allegedly defrauding an insurance company for nearly $1.8 million, according to court documents. Elzanaty, who reportedly owns medical companies that operate out of a building in the Bronx, allegedly billed State Farm Insurance for unnecessary tests related to automobile accidents that would maximize the insurance payout, the court papers say. Elzanaty, who was reportedly a "significant investor" in mosque developer Sharif el-Gamal’s $4.8 million mosque project, was also ordered to repay $331,000 after an audit showed Medicaid had overpaid him. [3]

The El-Gamal brothers seem to be cut of a similar sleazy cloth. According to Florida private investigator Bill Warner and to various New York reports, there is an investigation ongoing into Sammy and Sharif El-Gamal of the SOHO Properties by the New York State Dept of Licensing in Manhattan for non-payment of apartment rental deposits to customers that were supposed to be in escrow.

Court records from Florida to New York State reveal that Sharif and his younger brother, Samir "Sammy" El-Gamal, 35, a partner with him in his company SoHo Properties, both have a history of numerous tax and debt issues, dating from at least 1994 to the present. In one case, a NY Police officer arrested Sharif in 1994 for “promoting prostitution.” He pleaded guilty to a mis-demeanor of disorderly conduct. In another instance, Sharif told a court he didn’t hit a tenant from whom his brother and he were trying to collect back rent. He said to police, the tenant’s "face could have run into my hand." [4]

The brothers’ background does not suggest billionaire real estate project preparation. Sharif waited tables at the restaurant Serafina, while Sammy waited tables at Tao. Then Sharif worked as a waiter at Michael Jordan’s, named after basketball star. But he, ostensibly a devout muslim, was fired for arriving reeking of alcohol, among other things. This is around when Sharif started acquiring a criminal record, say people familiar with his career. [5]

The entire ‘911’ Mosque controversy has been made into world news by CNN and other select media. The US head of the military command in Afghanistan, General Petraeus got into the fray with a plea to the Florida pastor not to burn Korans, a move which naturally led several other wanna-be preacher bigots to say they too planned to burn Korans on the ninth anniversary of the World Trade Center event. The President, Barack Obama, got into the act by praising the building of the mosque as a symbol of Americans’ religious freedom and tolerance.

At the end of the day it all fuelled a “Clash of Civilization” tension across America, and had the convenient effect, whether the mosque is built on the site or not, of reinforcing the US Government version of the collapse of the World Trade towers on September 11, 2001, namely that the destruction was carried out by two commercial hijacked jets being deftly rerouted into the two towers. And that the Boeing jets had been allegedly hijacked by 19 Arab students, armed only with paper box cutters, who had just been trained at a Florida flight school to fly small Cessna-size private planes. By keeping alive the myth of the “Second Pearl Harbor,” as George W. Bush once called 9/11, perhaps some people such as Barack Obama or General Petraeus hope to keep attention on the need for US military occupation in Iraq and Afghanistan, or even spreading the war beyond Afghanistan.

One interesting question in the entire business is who put up millions of dollars for the sleazy El-Gamal brothers’ Soho Properties to pay $5 million cash for the property and to buy the other property for $46 million? Did the very established Witkoff Group, whose head, Steven Witkoff was selected as "Man of the Year" by The Jeffrey Modell Foundation in 1998, and who do major deals from London to New York not do a due diligence research on their new potential clients? Or is this all play money games using intelligence agency or other fake companies to create the explosive scenario at the anniversary of 9/11? These are some of the interesting questions to ask.