U.S. Prepares For New Decade Of War In Asia

Using the staged September 11, 2001 attacks as a pretext to invade Afghanistan, Washington is about to enter the eleventh year of its longest war in history. After Indochina, this war unequivocally designates Asia as the center of U.S. geopolitical strategy and the Pentagon’s main 21st century war front. According to Rick Rozoff, the U.S. will still be in Afghanistan well into the middle of the next decade and possibly much longer as military pressure on the broader Asian region continues to escalate. 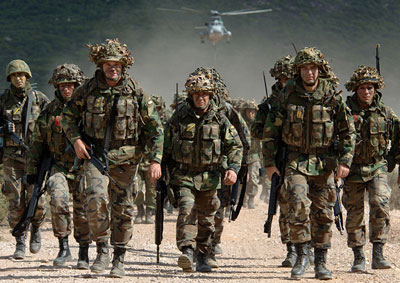 The United States is engaged in the longest war in its 234-year history in Afghanistan, one that will begin its eleventh calendar year in two weeks. Like the war that had been America’s longest before now, that in Indochina, the current one is in the Asian continent.

With repeatedly extended projected withdrawal dates, the latest is 2014, although even that has been characterized by Pentagon spokesman Geoff Morrell as merely “aspirational,” the campaign in Afghanistan and over the past two years in neighboring Pakistan has marked Asia as the center of U.S. global military strategy and operations.

Roughly 100,000 U.S. troops and over half as many more from Washington’s North Atlantic Treaty Organization allies and partners are waging an armed conflict that this year has resulted in an increasing number of civilian casualties and the most deaths among belligerents on both sides since it began on October 7, 2001. U.S. and NATO war dead this year are approaching the 700 mark, nearly a third of the total for the over nine-year-old war.

Since the U.S. invasion in 2001 opium production has grown by 40,000 percent (according to Russian estimates), with Afghanistan accounting for 92 percent of the world’s cultivation of the narcotic. In addition to the killing of Afghan civilians by U.S. and NATO air and night raids, bomb attacks against civilians, including suicide bombings, are regular occurrences in Afghanistan and in neighboring Pakistan and Iran.

30 September 2010 - Nato helicopters have killed three Pakistani soldiers in a region bordering Afghanistan in the fourth such strike in the course of that week.
Photo: AFP/GETTY IMAGES

Last month the U.S. and NATO flew 850 combat sorties, three times more than in November of last year. From January through November of this year foreign occupation forces’ aircraft have conducted 30,000 close air support missions for troops on the ground. In the last six months U.S. and NATO forces have launched 7,000 special operations missions in Afghanistan. [1] NATO helicopter gunships have also increased raids inside Pakistan, including one in September that killed three Pakistani border troops.

Central Intelligence Agency-directed drone missile attacks in Pakistan have risen to at least 108 so far this year, more than double the 53 strikes in 2009. The amount of deaths caused by the attacks has also doubled, over 800 compared to 400 the preceding year.

The Pentagon and its NATO allies have established a military presence on bases in several other nations in Central and South Asia, including – publicly – Kyrgyzstan, Tajikistan and Uzbekistan and without official acknowledgement in Pakistan, Kazakhstan and Turkmenistan.

In doing so the U.S. and the expansionist military bloc it controls have established a network of troops and bases in a swathe of territory with China to the east, Russia to the north and Iran to the west.

The expanding circle of military influence and infrastructure extends to India, with whom the U.S. leads bilateral and multinational naval, air and infantry/armor exercises in both countries, as well as pulling the world’s second most populous nation into the orbit of military interoperability through large-scale weapons transactions.

In Mongolia, U.S. Pacific Command and U.S. Army Pacific lead annual Khaan Quest military exercises with the host country’s armed forces and those of assorted American NATO and Asian allies in preparation for deployments to war zones like Iraq and Afghanistan. This year’s Khaan Quest included troops from – in addition to the U.S. and Mongolia – Canada, France, Germany, India, Japan, Singapore and South Korea.

Last July the U.S. led the two-week Angkor Sentinel military exercise in Cambodia with troops from 26 nations including Britain, France, Germany, Italy, Australia, India, Indonesia, Japan, Mongolia and the Philippines, described by Prime Minister Hun Sen as “a symbol of the strong military ties between the US and Cambodia.” [2]

U.S. Army Pacific will lead a follow-up exercise, Angkor Sentinel 2011, in Cambodia next May.

The III Marine Expeditionary Force, a Marine Air-Ground Task Force of the U.S. Marine Corps, is currently running ground and amphibious reconnaissance exercises and combat diving training with counterparts from the armed forces of Singapore on Guam “in order to sustain tactical proficiency and support the Pacific Command Commander’s Theater Security Cooperation Program.” [3] Singapore has deployed troops under the command of NATO’s International Security Assistance Force for the war in Afghanistan along with fellow Asia-Pacific nations Malaysia, Mongolia, South Korea, Kazakhstan, Australia, New Zealand and Tonga.

The Pentagon is building a $12.5 billion “super base” in Guam “in an attempt to contain China’s military build-up.”

The construction “will include a dock for a nuclear-powered aircraft carrier, a missile defence system, live-fire training sites and the expansion of the island’s airbase. It will be the largest investment in a military base in the western Pacific since the Second World War, and the biggest spend on naval infrastructure in decades.”

In addition, “The US is also investing another £126 pound [$197] million on upgrading infrastructure at the British-owned Indian Ocean atoll of Diego Garcia, 700 miles south of Sri Lanka.” [4]

A Russian report of last month quoted analyst Andrei Kortunov of the (pro-Western) New Eurasia Foundation on American military strategy in relation to Guam: “Americans do not say officially that this base is being created to contain China’s military build-up. But if we look at the map and compare the military potential of the countries surrounding the Pacific Ocean, it won’t be difficult for us to understand that, most likely, China is exactly the key factor which is taken into consideration here.”

He was further cited claiming that “There are many American military facilities in the northern part of the Pacific Ocean.

“They are scattered over a large territory north of Alaska across Okinawa and as far as the Hawaiian Islands, where, traditionally, the U.S. Navy has a stronghold. Which means that there are many U.S. military facilities there, which form an arc and which must guarantee America’s hegemony in the Pacific Ocean.”

The U.S. maintains that “these facilities have been set up to guarantee the security of commercial communications in the region, including the security of oil supplies from the Persian Gulf area to the western coast of the USA. But taking into account current tendencies, this infrastructure is regarded by many people in Beijing as one that is aimed against China.” [5] 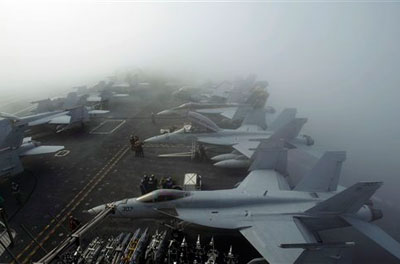 Since late last July the U.S. has conducted ongoing war games with South Korea, Japan and Vietnam in the Yellow Sea, the Sea of Japan/East Sea, the East China Sea and the South China Sea. The nearly 100,000-ton nuclear-powered supercarrier USS George Washington has been deployed for naval maneuvers in all four locations.

America’s top military commander, chairman of the Joint Chiefs of Staff Admiral Michael Mullen, and his South Korean counterpart General Han Min-koo recently confirmed that their two militaries will continue the joint exercises that have occurred since July: Invincible Spirit in that month, the mammoth Ulchi Freedom Guardian 2010 in August, an anti-submarine drill in the Yellow Sea and Proliferation Security Initiative maneuvers in September, and naval drills in the Yellow Sea in late November and early December.

On December 15 General Walter Sharp, commander of United States Forces Korea, repeated Mullen’s assertion that Washington and Seoul are planning further joint military exercises and that “The U.S. and South Korea will meet future North Korean attacks with the ‘utmost response’ available that ‘the laws of land warfare permit.’” [6]

The Pentagon’s 2010 Quadrennial Defense Review report of this February states:

“The United States is a global power with global responsibilities. Including operations in Afghanistan and Iraq, approximately 400,000 U.S. military personnel are forward-stationed or rotationally deployed around the world.

“America’s leadership in this world requires a whole-of-government approach that integrates all elements of national power. Agile and flexible U.S. military forces with superior capabilities across a broad spectrum of potential operations are a vital component of this broad tool set….The United States remains the only nation able to project and sustain large-scale combat operations over extended distances.” [7]

On the same day the Defense Department released the new Quadrennial Defense Review it also proposed a $708 billion budget for next year, the largest in constant dollars since 1946.

Washington has been at war in Asia since the first year of the decade that is now drawing to a close. It will still be in Afghanistan well into the middle of the next and in one manner and to some degree to its end. Asia is the Pentagon’s main 21st century war front.

Norway: NATO Rehearses For War In The Arctic