While the media has focused attention on the plight of the hostages, a look at the living conditions of the Somali "pirates" quickly reveals that they are pre-eminently fishermen struggling against the plundering of their coastal waters and the dumping of toxic wastes by Western countries. According to this article listed in the Censured Project ’Top 25 of 2010’, "piracy" is not the only aspect of the impact wrought by the continuing political chaos in Somalia. The UN itself has long neglected its obligations under the treaty on hazardous wastes. 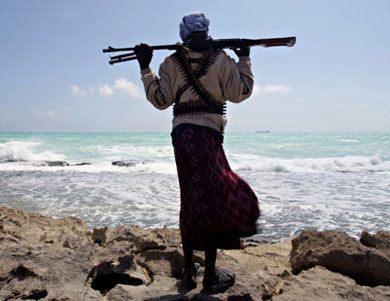 The international community has come out in force to condemn and declare war on the Somali fishermen pirates, while discreetly protecting the illegal, unreported and unregulated (IUU) fleets from around the world that have been poaching and dumping toxic waste in Somali waters since the fall of the Somali government eighteen years ago.

In 1991, when the government of Somalia collapsed, foreign interests seized the opportunity to begin looting the country’s food supply and using the country’s unguarded waters as a dumping ground for nuclear and other toxic waste.

According to the High Seas Task Force (HSTF), there were over 800 IUU fishing vessels in Somali waters at one time in 2005, taking advantage of Somalia’s inability to police and control its own waters and fishing grounds. The IUUs poach an estimated $450 million in seafood from Somali waters annually. In so doing, they steal an invaluable protein source from some of the world’s poorest people and ruin the livelihoods of legitimate fishermen. Allegations of the dumping of toxic waste, as well as illegal fishing, have circulated since the early 1990s, but hard evidence emerged when the tsunami of 2004 hit the country. [1] The United Nations Environment Program (UNEP) reported that the tsunami washed rusting containers of toxic waste onto the shores of Puntland, northern Somalia.

Nick Nuttall, a UNEP spokesman, told Al Jazeera that when the barrels were smashed open by the force of the waves, the containers exposed a “frightening activity” that had been going on for more than a decade. “Somalia has been used as a dumping ground for hazardous waste starting in the early 1990s, and continuing through the civil war there,” he said. “The waste is many different kinds. There is uranium radioactive waste. There is lead, and heavy metals like cadmium and mercury. There is also industrial waste, and there are hospital wastes, chemical wastes—you name it.”

Nuttall also said that since the containers came ashore, hundreds of residents have fallen ill, suffering from mouth and abdominal bleeding, skin infections and other ailments. “What is most alarming here is that nuclear waste is being dumped. Radioactive uranium waste that is potentially killing Somalis and completely destroying the ocean,” he said.

Ahmedou Ould-Abdallah, the UN envoy for Somalia, says the practice helps fuel the eighteen-year-old civil war in Somalia, as companies pay Somali government ministers and/or militia leaders to dump their waste. “There is no government control . . . and there are few people with high moral ground . . . yes, people in high positions are being paid off, but because of the fragility of the Transitional Federal Government, some of these companies now no longer ask the authorities—they simply dump their waste and leave.”

In 1992 the countries of the European Union and 168 other countries signed the Basel Convention on the Control of Transboundary Movements of Hazardous Wastes and Their Disposal. The convention prohibits waste trade between countries that have signed, as well as countries that have not signed the accord, unless a bilateral agreement had been negotiated. It also prohibits the shipping of hazardous waste to a war zone.

Surprisingly, the UN has disregarded its own findings, and has ignored Somali and international appeals to act on the continued ravaging of the Somali marine resources and dumping of toxic wastes. Violations have also been largely ignored by the region’s maritime authorities.

Documentary on the nuclear waste (uranium) and other hazardous wastes that industrialised countries dump in Somalia.

This is the context from which the men we are calling “pirates” have emerged.

Everyone agrees they were ordinary Somali fishermen who, at first, took speedboats to try to dissuade the dumpers and trawlers, or at least wage a “tax” on them. They call themselves the Volunteer Coast Guard of Somalia.

One of the pirate leaders, Sugule Ali, explains that their motive is “to stop illegal fishing and dumping in our waters. . . . We don’t consider ourselves sea bandits. We consider sea bandits [to be] those who illegally fish, and dump waste, and carry weapons in our seas.”

Author Johann Hari noted in the Huffington Post that, while none of this makes hostage-taking justifiable, the “pirates” have the overwhelming support of the local population for a reason. The independent Somalia news site WardherNews [2] conducted the best research we have on what ordinary Somalis are thinking. It found that 70 percent “strongly support the piracy as a form of national defense of the country’s territorial waters.” [3]

Instead of taking action to protect the people and waters of Somalia from international transgressions, the UN has responded to the situation by passing aggressive resolutions that entitle and encourage transgressors to wage war on the Somali pirates.

A chorus of calls for tougher international action has resulted in multi-national and unilateral Naval stampede to invade and take control of the Somali waters. The UN Security Council (a number of whose members may have ulterior motives to indirectly protect their illegal fishing fleets in the Somali Seas) passed Resolutions 1816 in June 2008, and 1838 in October 2008, which “call upon States interested in the security of maritime activities to take part actively in the fight against piracy on the high seas off the coast of Somalia, in particular by deploying naval vessels and military aircraft . . .”

Both NATO and the EU have issued orders to the same effect. Russia, Japan, India, Malaysia, Egypt, and Yemen, along with an increasing number of countries have joined the fray.

For years, attempts made to address piracy in the world’s seas through UN resolutions have failed to pass, largely because member nations felt such resolutions would infringe on their sovereignty and security. Countries are unwilling to give up control and patrol of their own waters. UN Resolutions 1816 and 1838, to which a number of West African, Caribbean and South American nations objected, were accordingly tailored to apply to Somalia only. Somalia has no representation at the United Nations strong enough to demand amendments to protect its sovereignty, and Somali civil society objections to the Draft Resolutions—which makes no mention of illegal fishing or hazard waste dumping—were ignored.

Hari asks, “Do we expect starving Somalians to stand passively on their beaches, paddling in our nuclear waste, and watch us snatch their fish to eat in restaurants in London and Paris and Rome? We didn’t act on those crimes—but when some of the fishermen responded by disrupting the transit-corridor for 20 percent of the world’s oil supply, we begin to shriek about “evil.” If we really want to deal with piracy, we need to stop its root cause—our crimes —before we send in the gun-boats to root out Somalia’s criminals.”

The crises of the multiple piracies in Somalia have not diminished since my previous article, “The Two Piracies in Somalia: Why the Word Ignores the Other,” was written in December 2008. [4] All the illegal fishing piracy, the waste dumping piracy and the shipping piracy continue with new zeal. Somali fishermen, turned pirates in reaction to armed foreign marine poachers, have intensified their war against all kinds of ships in the Gulf of Aden and the Indian Ocean.

On international response, foreign governments, international organizations and mainstream media have been united in demonizing Somalia and described its fishermen as evil men pillaging ships and terrorizing sailors (even though no sailors were harmed). This presentation is lopsided. The media said relatively little on the other piracies of illegal fishing and waste dumping.

The allied navies of the world—fleets of over forty warships from over ten Asian, Arab, and African countries as well as from many NATO and EU member countries—stepped up their hunt for the Somali fishermen pirates, regardless of whether they are actually engaged in piracy or in normal fishing in the Somali waters. Various meetings of the International Contact Group for Somalia (ICGS) in New York, London, Cairo, and Rome continue to underline the demonization of the Somali fishermen and urge further punitive actions without a single mention of the violation of illegal fishing and toxic dumping by vessels from the countries of those sitting in the ICGS and UN forums in judgment of the piracy issue.

At the ICGS Anti-Piracy meeting in Cairo on May 30 2009, Egypt and Italy were two of the loudest countries calling for severe punishment of the Somali fishermen pirates. As the ICGS are meeting in Rome today (June 10, 2009), two Egyptian trawlers full of fish illegally caught in Somali waters and an Italian barge that had been towing two huge tanks suspected of containing toxic or nuclear waste are being held in the Somali coastal town of Las Khorey by the local community, who invited the international experts to come and investigate these cases. So far, the international community has not responded to the Las Khorey community’s invitation.

It should be pointed out that both the IUUs and waste dumping are happening in other African countries. Ivory Coast is a victim of major international toxic dumping.

It is said that acts of piracy are actually acts of desperation, and, as in the case of Somalia, what is one man’s pirate is another man’s Coast Guard.

Documentary on the toxic waste dumped in Somalia by Italian maritime companies. Two journalists from Italy were assassinated in Mogadishu while investigating into the illegal toxic waste traffic in which they believed the Italian Army and other institutions were also involved.

[4] WardheerNews, 8 janvier 2009, “The Two Piracies in Somalia : Why the World Ignores the other”, par Mohamed Abshir Waldo.

Pirates of the Indian Ocean
THE ART OF WAR