Decision of the PSC of African Union on Libya 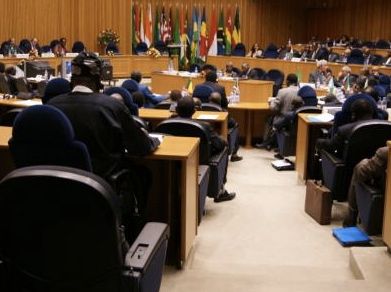 The Peace and Security Council of the African Union (AU), at its 265th meeting held at the level of Heads of State and Government, on 10 March 2011, adopted the following decision on the situation in Libya :

1. Takes note of the statements made by the Chairperson of the Commission, as well as by the representative of the Great Socialist People’s Libyan Arab Jamahiriya ;

2. Recalls communiqué PSC/PR/COMM(CCLXI) adopted at its 261st meeting, held on 23 February 2011, and the statement issued, the same day, by the Chairperson of the Commission ;

3. Expresses AU’s deep concern at the prevailing situation in Libya, which poses a serious threat to peace and security in that country and in the region as a whole, as well as to the safety and dignity of Libyans and of the migrant workers, notably the African ones, living in Libya. Council is equally deeply concerned with the resulting humanitarian situation ;

4. Expresses AU’s solidarity with Libya, and underscores the legitimacy of the aspirations of the Libyan people for democracy, political reform, justice, peace and security, as well as for socio‐economic development, and the need to ensure that these aspirations are fulfilled in a peaceful and democratic manner ; in this context, Council takes note of the stated commitment of the Libyan authorities to embark upon the path of reforms ;

5. Reiterates AU’s strong and unequivocal condemnation of the indiscriminate use of force and lethal weapons, whoever it comes from, resulting in the loss of life, both civilian and military, and the transformation of pacific demonstrations into an armed rebellion ; Council deeply deplores the loss of human life, conveys its condolences to the families of the victims and wishes early recovery to those who have been injured ;

6. Reaffirms its strong commitment to the respect of the unity and territorial integrity of Libya, as well as its rejection of any foreign military intervention, whatever its form ;

7. Expresses its conviction that the current situation in Libya calls for an urgent African action for :
(i) the immediate cessation of all hostilities,
(ii) the cooperation of the competent Libyan authorities to facilitate the timely delivery of humanitarian assistance to the needy populations,
(iii) the protection of foreign nationals, including the African migrants living in Libya, and
(iv) the adoption and implementation of the political reforms necessary for the elimination of the causes of the current crisis ;

8. Decides to establish an AU ad‐hoc High‐Level Committee on Libya comprising five Heads of State and Government, as well as the Chairperson of the Commission ; Council requests the Chairperson of the Commission to finalize the consultations undertaken in this respect and to announce the composition of the Committee as soon as possible. Council further decides that the Committee is mandated to :
(i) engage with all parties in Libya and continuously assess the evolution of the situation on the ground,
(ii) facilitate an inclusive dialogue among the Libyan parties on the appropriate reforms,
(iii) engage AU’s partners, in particular the League of Arab States, the Organization of the Islamic Conference, the European Union and the United Nations, to facilitate coordination of efforts and seek their support for the early resolution of the crisis ;

9. Further decides that the AU ad‐hoc High‐Level Committee on Libya be supported by a team comprising the Ministers of Foreign Affairs/External Relations and/or other relevant Ministers of the countries concerned, as well as the AU Commissioner for Peace and Security ;

10. Requests all AU Member States to provide logistical and humanitarian support to all African migrant workers wishing to leave Libya, as well as to those neighboring countries forced to bear a disproportionate burden and to the countries of origin to facilitate the socioeconomic reinsertion of these migrant workers. In this respect, Council requests the Chairperson of the Commission to take the necessary steps to coordinate such an effort, including the convening of a conference to facilitate the mobilization of the required resources and other related measures ;

11. Recalls the provisions of the OAU Convention on the Elimination of Mercenarism in Africa ; Council requests the Commission to gather information on the reported presence of mercenaries in Libya and their actions, to enable it, should these reports be confirmed, to take the required measures in line with the Convention ;

12. Requests the Chairperson of the Commission to transmit this decision to the United Nations Security Council, the League of Arab States, the Organization of the Islamic Conference, the European Union and other concerned AU partners, for their action as appropriate ;

13. Decides to remain actively seized of the matter.