Paris Summit for the Support of the Libyan People 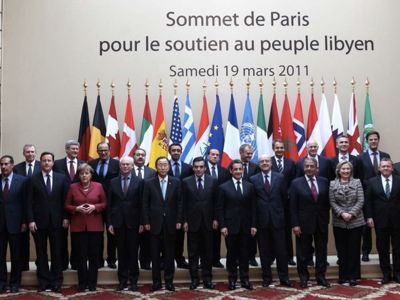 At the invitation of President of the French Republic, M. Nicolas Sarkozy,

met in Paris March 19, 2011 to discuss the situation in Libya in the wake of the adoption by the Security Council of UN resolution 1973.

At the end of the summit, the following declaration was adopted:

Since 15 February this year, the Libyan people have been peacefully expressing the rejection of their leaders and their aspiration for change. In the face of these legitimate requests coming from all over the country, the Libyan regime has carried out a growing brutal crackdown, using weapons of war against his own people and perpetrating against them grave and massive violations of humanitarian law.

Despite the demands which the Security Council expressed in UNSCR 1970 on 26 February, despite the condemnations of the Arab League, African Union, Organization of the Islamic Conference’s Secretary-General and European Union, as well as very many governments in the world, the Libyan regime has stepped up its violence in order to impose by force its will on that of its people.

This situation is intolerable.

We express our satisfaction after the adoption of UNSC 1973 which, inter alia, demands an immediate and complete ceasefire, authorises the taking of all necessary measures to protect civilians against attacks and establishes a no-fly zone over Libya. Finally, it strengthened and clarified the arms embargo vis-à-vis the Libyan regime and the rules applicable to the Libyan asset freeze, in particular on the National Oil Company, and travel restrictions against the Gaddafi’s regime.

While contributing in differentiated way to the implementation of UNSCR 1973, we are determined to act collectively and resolutely to give full effect to these decisions.

Muammar Gaddafi and those executing his orders must immediately end the acts of violence carried out against civilians, to withdraw from all areas they have entered by force, return to their compounds, and allow full humanitarian access. We reiterate that the Security Council took the view that Libyan regime’s forces actions may amount to crimes against humanity and that, to this end, it has referred the matter to the International Criminal Court.

We are determined to take all necessary action, including military, consistent with UNSCR 1973, to ensure compliance with all its requirements.

We assure the Libyan people of our determination to be at their side to help them realise their aspirations and build their future and institutions within a democratic framework.

We recall that UN Security Council resolution 1973 does not allow for any occupation of, or attempt to occupy the Libyan territory.

We pay tribute to the courageous action of the Libyan National Transition Council (NTC) and all the Libyans in positions of responsibility who have courageously disassociated themselves from the Libyan regime and given the NTC their support.

Our commitment is for the long term: we will not let Colonel Gaddafi and his regime go on defying the will of the international community and scorning that of his people. We will continue our aid to the Libyans so that they can rebuild their country, fully respecting Libya’s sovereignty and territorial integrity.