French plans to topple Gaddafi on track since last November

According to right-wing Italian journalist Franco Bechis, plans to spark the Benghazi rebellion were initiated by French intelligence services in November 2010. As Miguel Martinez from the progressive ComeDonChisciotte website observes, these revelations which have the blessing of the Italian secret services should be interpreted as the sign of existing rivalries within the European capitalist camp.
Voltaire Network wishes to point out that Paris promptly paired up with London in its scheme to overthrow Colonel Khadafi (Franco-British expeditionary force). This plan was recalibrated in the context of the Arab revolutions and taken over by Washington, which imposed its own objectives (counter-revolution in the Arab world and landing AfriCom on the Black continent). Therefore, the current coalition arises from a diversity of ambitions, which accounts for its internal contradictions. The timeline of events which set the stage for the military intervention against Libya is presented below. 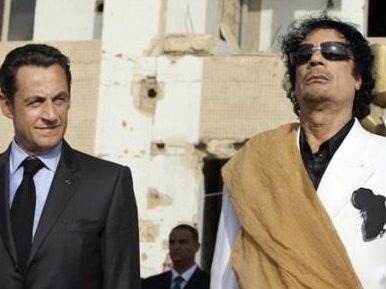 Nouri Mesmari turned himself over to the French secret service and, according to the Italians, he masterminded the revolution against Gaddafi. The document was leaked to Italian newspaper Libero.

In the documents, the French secret services refer to Mesmari as ‘The Libyan Wikileak’ because he gave them all the inside information about the regime as well as an account of who’s who in Libya and who they should or should not contact.

With all the inside information, the Italians claim that by mid-January the French had paved the way for the beginning of the revolution against Gaddafi.

Nouri Masmari boarded a Libyan Arab plane headed for Tunis accompanied by all his family. The day after, they were en route to France, claiming that he travelled to Paris due to health reasons. He stayed at the Concorde Lafayette Hotel.

In Paris he never met any doctors. In the following days he had several top secret meetings with high secret service French agents and other top government functionaries close to Nicolas Sarkozy.

A long caravan of official cars is parked in front of the hotel Concorde Lafayette whilst in the Mesmari suite an important meeting is taking place. It is a long meeting.

A French ‘commercial’ delegation leaves for Benghazi. In the delegation there are officials from the Ministry of Agriculture and representitives from Cam Cereals, France Export Cereals, Cargill, Glencore, France Agrimer, Soufflet, Louis Dreyfous, and Comagra. Among the delegation, posing as government officials, there are French secret service agents and military staff. Their ‘business’ was meeting army officers fingered by Mesmari as being willing to defect from the Libyan army.

While in Benghazi, contact is made with Libyan air defence colonel Abdallah Gehani, who was designated by Nouri Mesmari as an army officer who is ready to collaborate in toppling Muammar Gaddafi. Gehani had good contacts in Tunisia too.

It is a secret operation but the Libyan regime suspects that a double game was being played and that something was about to happen.

An international warrant of arrest is issued by the Libyan government for Nouri Mesrami. Foreign Minister Musa Koussa is held responsible for the defection of Mesrami and his passport is withdrawn by the authorities. 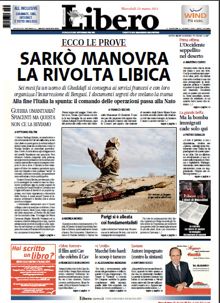 French authorities announce that they have arrested a collaborator of Gaddafi. Word reaches Gaddafi that Mesrami is under house arrest at the Concorde Lafayette Hotel and is furious that his former friend and colleague asked for political asylum in France, where he still resides to this date. In fact during the first week of the uprising in Libya Mesrami gave interviews to Al Jazeera from a Paris studio.

Muammar Gaddafi sends messages to Nouri Mesrami to win him back saying that he forgives him for what he did and invites him back to Libya.

An Gaddafi emissary, Head of state media Abdallah Mansour, is arrested at the Hotel Concorde Lafayette trying to contact Mesrami.

A delegation of Libyans arrives in Paris for meetings with Mesrami and other French officials. The Libyans are Ali Ounes Mansouri, Farj Charrant and Fathi Boukhris. These three men will be known later together with Ali Hajj as leaders of the revolution, that started from Benghazi.

The Libyan delegation together with Mesrami and French military and secret service personnel dined at an elegant French restaurant at the Champs Elisée.

Between Christmas and the start of the New Year, the French are in possession of all the details and available inside information; in the compilation of the Maghreb Confidential document, it is stated that “the situation in Benghazi is boiling”.

Colonel Abdallah Gehani is arrested by the chief of the secret service in Cerenaica, Aoudh Saaiti. Two days later the Colonel is transferred to a prison in Tripoli and accused of treason with the aim of holding back any dissent. But it was too late, the ball was already rolling and the first signs of the revolution were seen a few days after a prominent lawyer, Fathi Tarbel, was arrested. The protest soon turned into clashes and as army officials deserted, the rebels advanced and took over important cities, but so far they have failed to take Tripoli.

The French government led the airstrikes over Libya, was the first European state to recognise the new Libyan National Council and establish diplomatic relations. Since the Italian government was made aware of the documents, it started to take the back seat in the Libya crisis, and Prime Minister Berlusconi said that Italian military planes will not be engaged in airstrikes and that he hopes that it does not end in war.