Report to the Security Council by the humanitarian coordinator about Libya 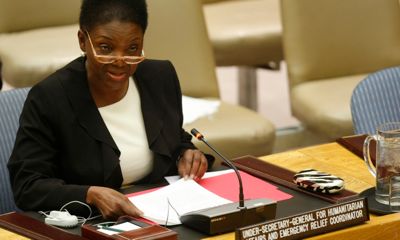 Ms. Amos: I thank you, Mr. President, for this opportunity to provide an overview of the humanitarian situation in Libya to the Security Council.

The conflict, the breakdown of State infrastructure and shortages of cash and fuel are causing serious problems to the population of Libya. Over 746,000 people, most of them third-country nationals, have fled the country. Some 5,000 people remain stranded at border points in Egypt, Tunisia and Niger. Approximately 58,000 internally displaced people are living in spontaneous settlements in eastern areas of Libya. Widespread shortages are paralysing the country in ways which will impact gravely on the general population in the months ahead, particularly the poorest and most vulnerable. We do not have yet an accurate figure of the total number of casualties since the start of the crisis.

The longer the current situation continues, the graver the humanitarian situation will become. With this in mind, the United Nations has established a humanitarian presence in both Benghazi and Tripoli. The agreement I reached with the Libyan authorities in Tripoli on 17 April included a commitment that the establishment of a United Nations humanitarian presence in Tripoli would be fully supported. The agreement included the facilitation of security and other arrangements necessary for humanitarian agencies to assess and assist areas affected by conflict in the west of Libya.

The Government has sought to facilitate our work as per that agreement, and it is unfortunate that our team has had to temporarily relocate from Tripoli for security reasons, following the ransacking of United Nations offices there on 1 May. The Government of Libya has apologized for the incident and offered full compensation for the damage caused. The Humanitarian Coordinator for Libya has written to the Libyan Foreign Minister asking for a renewed commitment to safeguarding United Nations personnel and property, and he has received a positive reply. It is our intention to return as soon as possible to Tripoli and to open land access to Misrata, the Western Mountains and other affected areas.

In Libya today humanitarian agencies are most concerned about people living in areas where fighting is taking place. In Misrata, which is at the forefront of our concerns, shelling and fighting have been ongoing in parts of the city for more than two months. Stocks are available, but some people are running short of food, water and other basics. Medical facilities need supplies and more trained personnel.

Humanitarian assistance has entered Misrata on an ad hoc basis, and humanitarian non-governmental organizations, especially medical organizations, are present on the ground. Over 5,000 metric tons of humanitarian aid has been delivered to Misrata, including food assistance, medical supplies and water and sanitation materials. The vast majority has entered through the port. More than 13,000 people, mainly third-country nationals, have been evacuated from the city by boat.

Those operations have been successfully carried out on the basis of transparent notification of humanitarian movements to all parties to the conflict. Continued liaison with all parties is essential to maintain, and indeed expand, the scope and reach of humanitarian operations. Between 150 and 300 third-country nationals still need to be evacuated from the city. There are an unknown number of seriously ill and injured people who also require evacuation assistance.

The situation in the Western Mountains region, where an estimated 750,000 people live, has received less attention, but is also very concerning. Fighting has reduced access to food and medical supplies. Fifty thousand people have fled to Tunisia. Most of them are now residing with Tunisian host families, who have generously received them. The World Food Programme has delivered some assistance, and non-governmental organizations have taken great risks to reach the main towns of Nalut and Zintan with medical assistance. About 2,200 people are in refugee camps in southern Tunisia. The Office of the United Nations High Commissioner for Refugees and its partners are providing food and non-food items to those refugees, as well as to host families. The Libyan Ministry of Social Welfare has informed us that it is assisting approximately 5,000 families from Misrata, the Western Mountains region and southern areas — about 33,000 people in total.

In spite of the repeated requests of the Secretary-General and the international community as a whole, civilians are still coming under fire in these areas of conflict. This has to stop. The Security Council must continue to insist that all parties respect international humanitarian law and ensure that civilians are spared. The reported use of cluster bombs and sea and land mines, as well as deaths and injuries caused by aerial bombing, show a callous disregard for the physical and psychological well-being of civilians. There are reports of sexual violence, including rape. We are also concerned that children could be recruited as combatants. Disappearances and abductions are reported. The shelling of the port in Misrata has prevented humanitarian ships from accessing the port.

All parties need to agree a temporary pause in the fighting in Misrata and other areas. That would provide a respite from violence for the civilian population and enable those who wish to leave to do so. An independent assessment of the humanitarian situation could be conducted. A pause would also enable the delivery of essential medical supplies and other relief items, as well as the evacuation of third-country nationals, the wounded and others who require emergency medical assistance. My colleagues and I will continue to press for this.

In Benghazi and other areas there are no immediate acute emergency needs. But an influx of approximately 58,000 displaced people has given rise to some humanitarian requirements. There are also protection concerns and wider human rights concerns.

Throughout Libya communities have opened their homes to families who have been displaced. While that is a testament to the generosity of the Libyan people, it means that host families themselves are doubly affected by the crisis. The longer this situation continues, the greater the likelihood that those families will need significant support.

The manner in which the sanctions are implemented and monitored is causing serious delays in the arrival of commercial goods. In addition, the conflict has caused a serious disruption of supply lines within the country, which has already led to shortages of fuel and difficulties in obtaining commodities, including foodstuffs, medicines and other essential goods. There have also been severe cash shortages throughout the country.

The impact of these problems is being felt nationwide and in all sectors. I am particularly concerned about the effect on the health sector. In Tripoli the Libyan Ministry of Health has reported that only 45 percent of medical staff are working. Thousands of foreign nurses and doctors left the country at the start of the crisis. Essential medicines, supplies and vaccines will not be replenished when they run out. Even if imported medicines do enter the country, they cannot be distributed to health facilities due to fuel shortages and the disruption of supply lines.

Schools are closed. School buildings have been damaged or are sheltering displaced people. School-age children are traumatized. Teachers and students are unable to get to school, including in Tripoli, because of fuel shortages. Annual examinations have been postponed. No planning is under way for the next academic year. Educational materials are increasingly unavailable, as they also must be imported.

Food stocks are being depleted. Libya is a food deficit country, heavily reliant on imports. Between 75 and 90 per cent of all consumed cereals are imported. The country requires between 110,000 and 150,000 metric tons of food monthly to feed its population of over 6.5 million. A recent inter-agency mission found two months of food stocks in the eastern region of the country; Western Libya has three months of food stock. Also of concern for the country’s longer-term food security is the disruption of the public food distribution system, the departure of third-country national agricultural workers and the unavailability of fuel to transport agricultural produce around the country. The short supply of cash combined with rising food prices will make it increasingly difficult for vulnerable people to get what they need.

The lack of fuel is also impacting on the functioning of desalination plants and other water purification mechanisms. Desalination supplies are running out. The current situation will contribute to the need for continuing humanitarian assistance in Libya in the months ahead.

Those structural vulnerabilities need to be addressed to ensure that the adverse effects on the civilian population are minimized.

The delivery of humanitarian assistance in Libya must remain distinct from the military activities of all parties to the conflict. Every possible effort is being made to deliver assistance and evacuate the injured and third-country nationals while using only civilian resources. Only as a last resort will the military assets that have been generously offered by some Member States be mobilized. We have not yet reached that point.

In this complex and charged environment, a loss of confidence by any of the parties to the current hostilities in the strictly neutral, impartial and independent character of humanitarian action would jeopardize our ability to reach the people who need help. Humanitarian agencies must have access to all

people, regardless of where they are and under whose control they happen to find themselves. The work of humanitarian agencies must not be impaired. Aid workers must not become targets because of perceived compromises to their neutrality, impartiality and independence.

The next two to three months will be a critical period for Libya. So far, we have received $144 million for humanitarian work. That is 46 per cent of what is needed. I would like to thank Member States for their support. We are now revising our appeal. We will need additional resources to support increased humanitarian activities within Libya. I count on members’ continued support for the humanitarian effort in Libya, and for achieving the desperately needed temporary humanitarian pause.

Source : “Report to the Security Council by the humanitarian coordinator about Libya”, Voltaire Network, 9 May 2011, www.voltairenet.org/article169902.html

Source : “Report to the Security Council by the humanitarian coordinator about Libya”, Voltaire Network, 9 May 2011, www.voltairenet.org/article169902.html