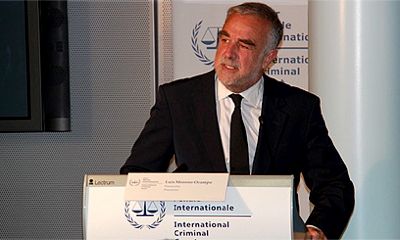 Thank you for your presence here.

Less than three months ago the UN Security Council unanimously required the intervention of the Office of the Prosecutor of the International Criminal Court to conduct an impartial investigation into the crimes committed in Libya. Today, the Office presented its evidence to the judges and is requesting the International Criminal Court to issue arrest warrants

The evidence shows that Muammar Gaddafi, personally, ordered attacks on unarmed Libyan civilians. His forces attacked Libyan civilians in their homes and in the public space, repressed demonstrations with live ammunition, used heavy artillery against participants in funeral processions, and placed snipers to kill those leaving mosques after the prayers.

The evidence shows that such persecution is still ongoing, as I speak today, in the areas under Gaddafi control. Gaddafi’s forces prepare lists with names of alleged dissidents. They are being arrested, put into prisons in Tripoli, tortured and made to disappear,

Most of the victims are Libyans, but the widespread and systematic attacks against them are affecting the international community as a whole. The crimes are crimes against humanity. That is why the Arab League and the African Union were concerned and the Security Council decided the intervention of the International Criminal Court. The situation in Libya is also reflective of the broader movement for change sweeping the region. States in the region have been indispensable to the investigation, but more importantly, citizens from the region have played a key role in their personal capacities in bringing support to Libyan victims and making sure their stories are heard by the Court.

On the basis of the evidence collected the Office defined who bear the greatest criminal responsibility.

The evidence shows that Gaddafi relies on his inner circle to implement a systematic policy of suppressing any challenge to his authority. His second eldest son, Saif Al Islam, is acting as a de facto prime minister and Al-Sanousi, Gaddafi’s brother-in-law, is his right-hand man and the Head of the Military Intelligence.

Based on the evidence collected, the Prosecution has applied to Pre-Trial Chamber I for the issuance of arrests warrants against Muammar Mohammed Abu Minyar Gaddafi, Saif Al-Islam Gaddafi and Abdullah Al-Sanousi.

The case is now before the judges. They can accept the request, reject it or ask for more evidence.

My Office has not requested the intervention of international forces to implement the arrest warrants. Should the Court issue them and the three individuals remain in Libya, Libyan authorities have the primary responsibility to arrest them. Libya is a member of the United Nations and it has the duty to abide by Security Council Resolution 1970.

When the time comes, implementing the arrest warrants will be the most effective way to protect civilians under attack in Libya and elsewhere. As in any other criminal case, the execution of the warrants will have a deterrent impact for other leaders who are thinking of using violence to gain or retain power.

Prosecutor of the International Criminal Court (since 2003).