Statement by Jean Ping at the Contact group on Libya 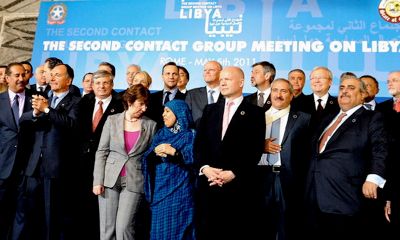 Distinguished Co‐Chairs of the Contact Group on Libya
Ladies and Gentlemen,

I would like, from the outset, to carry out a pleasant duty of thanking Minister Francesco Frattini for having kindly invited the African Union to this meeting of the Contact Group on Libya. A few weeks ago, I was here, in Rome, at the invitation of Minister Frattini, for consultations on Libya that enabled us exchange views on the situation in this country and on our respective efforts. In general, Italy and the AU have forged a close partnership in the field of peace and security whose relevance is highlighted by the current circumstances in Libya, as well as by the support that Italy gives to our efforts in Somalia, Sudan and elsewhere on the continent. I would like to express our sincere gratitude to the Italian Government.

Our presence in Rome, as an invited guest at the meeting of the Contact Group, is further testimony to the commitment of the African Union to interact and hold dialogue with its partners to speed up the resolution of the Libyan crisis. At its last meeting on the situation in Libya, on 26 April, our Peace and Security Council (PSC) reiterated the need for more coordinated international action and a common vision of what the international community can and must undertake to support the quest for peace in Libya and to fulfill the legitimate aspirations of the Libyan people. I hope that this meeting of the Contact Group will contribute to the attainment of this objective.

Since your last meeting in Doha, the situation in Libya has continued to deteriorate, marked by continued fighting and other military operations, the deterioration of the humanitarian situation, which is tragically illustrated by the plight of the people living in the town of Misrata, and the absence of any dialogue between the parties to find a comprehensive solution to the various aspects of the crisis.

The African Union is particularly concerned about this turn of events. Our concern is greater, more especially as the Libyan crisis has obvious regional dimensions, and that Libya’s neighbours are the ones that pay the heaviest price for the continuation and worsening of the current conflict. Tens of thousands of African migrant workers have returned to their countries of origin with no real prospect of socio‐economic reintegration, given the constraints of all kinds which our countries are facing. And it is obvious that the burden thus imposed on many of our Member States will inevitably generate social tensions that could degenerate into political crisis. The reports on the proliferation of weapons from Libyan armoury can only heighten our concern, especially as some countries in the region are faced with latent rebellions or emerging from conflict, not to mention the scourge of terrorism.

We are convinced that, in the final analysis, only a political solution will fulfill the legitimate aspirations of the Libyan people and promote lasting peace in that country. It is this belief that informs our approach since 10 March 2011, when the PSC worked out a roadmap for resolving the Libyan crisis.

The AU Ad hoc Committee on the Situation in Libya met at ministerial level in Addis Ababa, on 25 April 2011. On that occasion, the Committee met with representatives of both parties. The Libyan Government reiterated its unconditional acceptance of the AU Roadmap, while the National Transitional Council pledged to study the document thoroughly. It is expected that both sides will shortly submit their comments and proposals on the various elements of the Roadmap.

On its part, the PSC, meeting on the next day at ministerial level, having renewed its confidence in the Ad Hoc Committee, asked the said Committee and the Commission to expeditiously finalize appropriate consultations with the Libyan parties and the multilateral and bilateral partners, with a view to opening the way for the speedy holding, at a venue agreeable to the parties and under the auspices of the AU, the League of Arab States, the Organization of Islamic Conference, the European Union and the UN, of negotiations on a ceasefire and other aspects of Libyan crisis.

Since then, we have held a number of consultations with our partners to make it possible to convene, as early as possible, negotiations between the Libyan parties. We are hopeful that they will extend the necessary cooperation to enable us move quickly to the political phase, the only one that could guarantee a lasting solution to the crisis.

I would like to appeal to all members of the Contact Group to lend their full support to the efforts of the AU and its High‐level Committee, whose role is formally recognised by the Security Council in its Resolution 1973 ( 2011). It is imperative to open a political prospect in Libya, as it is true that nowhere force alone has made it possible to achieve lasting results.

The role of the international community is to help the Libyan people overcome this sensitive phase of its history, and its involvement must be laid on clear bases, namely:

(i) the need to duly take into account the legitimate aspirations of the Libyan people to democracy, political reform and good governance, and the fact that only Libyans should determine the future of their country;

(ii) respect for international legality, which requires, under the circumstances, that all act within the limits of the provisions of Resolutions 1970 and 1973 (2011). In this regard, our PSC expressed concerns that must be taken into account if we want to promote and consolidate an international consensus on the way forward and strengthen global governance based on effective multilateralism; and

(iii)the persevering and sustained search for a political solution to the present crisis, which demands that the international community fully mobilize itself to facilitate the speedy conclusion of a ceasefire, as required by the Security Council in its Resolution 1973 (2011), being clearly understood that the ceasefire is only one the elements, certainly an important one, of the overall solution that we must promote, and that it must be accompanied by the establishment of an international verification and monitoring mechanism which is effective and credible.

The AU has no other agenda in Libya than to facilitate the resolution of the crisis and a democratic transition in that country. We are all the more determined in our endeavor as the AU Constitutive Act and a number of other relevant instruments of our Union are very clear as regards the collective commitment of Africa to promote peace, as well as democracy and the rule of law. The AU Roadmap offers a viable basis for launching a political process led and owned by the Libyans, so that the democratization of their country is the result of their action and the consensus they would have reached. As experience has taught us on several occasions, this is critical for sustaining any democratic gain.

Source : “Statement by Jean Ping at the Contact group on Libya”, by Jean Ping, Voltaire Network, 5 May 2011, www.voltairenet.org/article170140.html

Jean Ping’s Call to Laurent Gbagbo to hand over power

Source : “Statement by Jean Ping at the Contact group on Libya”, by Jean Ping, Voltaire Network, 5 May 2011, www.voltairenet.org/article170140.html