African Union decision on the peaceful resolution of the libyan crisis 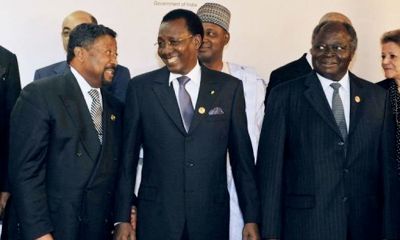 1. The Assembly of the Union, at its extraordinary session held in Addis Ababa, Ethiopia, on 25 May 2011, to deliberate on the state of peace and security in Africa, reviewed in‐depth the situation in Libya, in light of the Report of the Chairperson of the Commission [EXT/ASSEMBLY/ AU/2.(01.2011)], as well as the update provided by the African Union (AU) High‐Level Ad hoc Committee on Libya.

2. The Assembly, having reiterated all earlier communiqués of the Peace and Security Council (PSC) on the situation in Libya, expressed deep concern at the prevailing situation and at its consequences on the civilian population and the long‐term stability of Libya, as well as on the countries of the region, in particular those of North Africa and the sahelo‐saharan area.

3. The Assembly reiterated its conviction that only a political solution to the current conflict will make it possible to promote sustainable peace in Libya and fulfill the legitimate aspirations of the Libyan people to democracy, rule of law, respect for human rights and good governance, as well as preserve the unity and territorial integrity of Libya. In this respect, the Assembly endorsed the African Union (AU) Roadmap for the Resolution of the Crisis in Libya, as adopted by the PSC, at its 265th meeting held on 10 March 2011 (PSC/PR/COMM.2(CCLXV)), and stressed its continued relevance.

4. The Assembly reiterated the need for an immediate end to all attacks against, and abuses of, civilians, as well as an immediate ceasefire, as demanded by Security Council resolution 1973(2011) and the PSC, to be monitored by a credible, effective and verifiable international mechanism. The Assembly stressed that the ceasefire should lead to the establishment of a consensual and inclusive transitional period during which the necessary reforms to meet the legitimate aspirations of the Libyan people would be carried out, culminating in elections that would enable the Libyans to choose freely their leaders.

5. Pending the establishment of such a ceasefire, and in view of the dire humanitarian situation on the ground, as notably highlighted by the United Nations Under Secretary‐General for Humanitarian Affairs and Coordinator for Emergency Relief, the Assembly demanded an immediate pause in the fighting and in the NATO‐led air campaign, to provide respite to the civilian population, alleviate its suffering and make it possible to deliver the much‐needed humanitarian assistance to all those in need of it. In this respect, the Assembly is of the well‐considered view that the continuation of the NATO‐led military operation defeats the very purpose for which it was authorized in the first place, i.e. the protection of the civilian population, and further complicates any transition to a democratic dispensation in Libya.

6. The Assembly directed the PSC to diligently consider and authorize the immediate deployment of an AU Observer Mission to closely monitor the situation, provide independent assessment of developments taking place on the ground and facilitate the subsequent establishment of a larger international mission that would involve the United Nations, the League of Arab States, the AU and other organizations. The Assembly called on Member States to provide the personnel, as well as the financial and logistical support required for the early and effective deployment of the envisaged observer mission. It appealed to the Libyan parties to fully cooperate with this mission, and to the AU partners to contribute to its success.

7. While reiterating the commitment of the AU to resolutions 1970(2011) and 1973(2011), the Assembly stressed the obligation of all Member States of the United Nations and the other concerned international actors to fully comply with the letter and spirit of those resolutions. The Assembly expressed deep concern at the dangerous precedence being set by one‐sided interpretations of these resolutions, in an attempt to provide a legal authority for military and other actions on the ground that are clearly outside the scope of these resolutions, and at the resulting negative impact on the efforts aimed at building an international order based on legality. The Assembly requested the African Group in New York and the African members of the United Nations Security Council, to take the initiative of the early convening of a meeting of the Security Council, as well as the General Assembly, in order to assess the implementation of resolutions 1970(2011) and 1973(2011).

8. The Assembly expressed Africa’s surprise and disappointment at the attempts to marginalize the continent in the management of the Libyan conflict, recalling that the role of the High‐Level ad hoc Committee is formally recognized by the Security Council in paragraph 2 of resolution 1973 (2011), and falls within the overall context of Chapter VIII of the UN Charter on the role of regional arrangements in the settlement of disputes among and within their member States. The Assembly also recalled that Africa, particularly the countries of the region, are those that bear the greatest impact of the conflict in Libya, both in terms of security and socio‐economic consequences.

9. The Assembly stressed that the lasting resolution of the Libyan crisis requires a significant contribution by Africa and close coordination among all stakeholders. In this respect, the Assembly pledged Africa’s solemn commitment to work closely with its multilateral partners, in particular the United Nations and the Secretary‐General’s Special Envoy for Libya, in the spirit of operative paragraph 2 of resolution 1973(2011), the League of Arab States, the Organization of the Islamic Conference (OIC) and the European Union (EU), as well as with its bilateral partners.

10. The Assembly reiterated the unique contribution that the ad hoc Committee could make to the search for a peaceful solution to the conflict in Libya, in a manner consistent with the objectives of resolutions 1970(2011) and 1973(2011). Accordingly, and having, once again, expressed AU’s appreciation for the work done so far by the ad hoc Committee, the Assembly requested the Committee to pursue and intensify its efforts, including by undertaking a further visit to Tripoli and Benghazi, to advance the search for a political solution to the conflict, including the speedy establishment of a consensual transitional period, on the basis of the AU Roadmap and proposals that may be submitted by the parties. The Assembly also requested the Committee to dispatch, as early as possible, a delegation at ministerial level to New York, to interact with the Security Council and its members on the AU’s efforts and the way forward in Libya.

11. The Assembly welcomed the decision to convene, in Cairo, Egypt, on 30 May 2011, of a meeting that would bring together the AU, the League of Arab States, the OIC, the EU and the United Nations, to work out practical steps for a ceasefire and the launching of a political process that would lead to a lasting solution to the crisis.

12. The Assembly expressed grave preoccupation at the fate of the African migrant workers living in Libya and of those trying to depart from the country, noting with sadness the death at sea of several hundreds of people, mostly African citizens, after their boats sank. The Assembly reminded the countries and organizations whose vessels patrol in the Mediterranean Sea of their obligation to provide assistance to all boats leaving Libya. The Assembly further stressed the need to respect the humanitarian principle of non‐refoulement from Europe’s territorial waters and lands for the thousands of people fleeing the war ravaging Libya.

13. The Assembly paid tribute to the neighboring countries of Libya, in particular Algeria, Egypt and Tunisia, for having received hundreds of thousands of civilians, including Africans, fleeing the violence in Libya. The Assembly commended their generosity and hospitality, expressing the hope that the example that they have set will be emulated elsewhere. The Assembly also expressed appreciation to the humanitarian agencies, in particular the UN High Commissioner for Refugees (HCR) and the International Organization for Migration (IOM), for their invaluable support and contribution.

14. The Assembly, looking forward to the strengthening of the AU role in the process leading to the peaceful resolution of the Libyan crisis, requested the Commission to submit to it a report on the evolution of the situation and progress made in the implementation of the present decision and relevant PSC communiqués at its next ordinary session, in Malabo, Equatorial Guinea.

Source : “African Union decision on the peaceful resolution of the libyan crisis”, Voltaire Network, 25 May 2011, www.voltairenet.org/article170143.html

Source : “African Union decision on the peaceful resolution of the libyan crisis”, Voltaire Network, 25 May 2011, www.voltairenet.org/article170143.html