“After You Brother!” Qadaffi Stays And Obama Leaves? 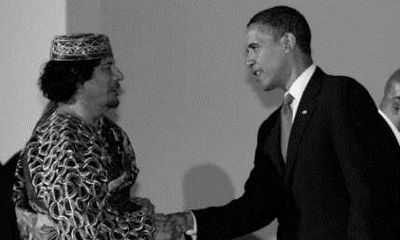 The 6/27/11 International Criminal Courts (ICC) arrest warrants issued for Muammar Gadhafi, his son Seif al-Islam Gadhafi, and Libya intelligence chief Abdullah al-Sanoussi, however pleasing to the “rebels” and NATO, probably won’t have much effect on negotiating a settlement between the two camps and certainly the warrants will not facilitate a voluntary regime change. Quite likely, the warrants effects will tend toward the obverse, with the Libyan government ignoring, but ridiculing the much criticized ICC and pointing out its historical pattern of targeting African leaders. At Tripoli’s Rixos Nasser Hotel, just a few hours after the arrest warrants were announced, Libya’s Justice Minister and a high ranking Foreign Affairs official did just that and then refused to take any questions from the large gathering of western journalists of whom Libya is distrustful of, given a spate of recent false main stream media reports that have been exposed as hoaxes.

Colonel Qaddafi and his supporters, in a series of what this observer refers to as “Hezbollah style free give and take dialogue sessions” are making it very plain that they will prevail in re-unifying Libya and probably before Ramadan which begins, this year, in early August. They argue that the “rebels” are increasingly fighting among themselves and are losing popular support. It’s an argument similar to the one the “rebels” are using to explain how their victory is all but assured, also by the end of Ramadan.

A subsequent report will also detail NATO terrorism and crimes against the civilian population that have included the 2/17 /11 to 6/27/11 bombing of 294 civilian targets, killing and wounding a total of 6,232 according to the Libyan Red Crescent Society statistics. These civilian targets include the Libyan Down’s Syndrome Society, a school that provided speech therapy, handicrafts and sports sessions for disabled children, as well as Tripoli’s Nassar University, homes, schools, medical facilities and food storage warehouses, Bombing these sites are all outlawed by the Geneva Conventions and constitute NATO war crimes. An additional massive documentation project by international organizations is expected to be completed by July 30, 2011.

Once entering Libya from Tunisia, the roughly 115 mile drive to Tripoli currently provides a fascinating if unsettling introduction to the current situation in Tripoli. By the time I arrived at the hotel, my mouth tasted like I had sipped kerosene and my clothes reeked of the same. The reason is that the acute petroleum products shortage has meant that Tunisians and others are transporting for quick cash, whatever they can get to Tripoli to supply thousands of cars that are stranded along the roadside without fuel in their tanks. Just about every opened car trunk I observed being inspected randomly at more than 50 check points between Jerba, Tunisia and Tripoli, Libya, were jammed with full plastic fuel containers. Many apparently leak and over the past three months have left a heavy pall and stench for nearly one hundred miles. Some trucks, loaded with perhaps close to 1000 55 gallon drums of gasoline seemed quite ready to topple over from being seriously top-heavy with the center of gravity being at tire level. Bread, children’s toys as well as dry and canned goods also fill many cars.

The main attitude one encounters on the streets of the old city such as Avenue Omar Muktar, and along the cornice is defiance and strong nationalist support for Libya’s Revolution.

“It’s our country. What choice do we have but to defend it?“is a commonly expressed sentiment. One woman asked me, “Shall I take off my white Hijab and wave it to surrender when the NATO troops come to my neighborhood or shall I wear my green scarf and fire my weapons. For sure my choice is the second!”

A Libyan businessman, who admits he has lots of free time these days, and who was educated at George Washington University, commented: “UN Security Council Resolution 1973 authorized the enforcement of a no-fly zone over Libya to supposedly protect civilians from Muammar Gaddafi. The reality is that we need NATO to just declare ‘mission accomplished’ and then stop slaughtering our “protected” people?”

This morning during a long and exhilarating discussion with an official at the Libya People’s Congress HQ in Tripoli, the General=Secretary told me that more than two million of the 3.5 million Libyans over 18 years have been armed and are training to fight NATO when/if they arrive on the ground.

Virtually everyone who is asked gives assurances that “Baba (Father) Qaddafi” will not flee but will, if necessary, die defending his country. They believe he will survive even more NATO assassination attempts. More than once officials confidently stated that Qaddafi will be here after US President Obama is rejected by the American people in the 2012 election.

Support for this idea is found in the seemingly widespread support Qaddafi appears to enjoy and also certain “benefits” resulting from a certain Libyan pride in five million citizens still full of resistance after 100 days of facing 27 countries.

The bombs have united the people, forced the sometimes too comfortable population to face the future even one without Baba Gaddafi; learned that the media strikes with false stories is stronger than the military assault in some respects, the exposure of several in the government who were ready to quickly sell out, with one million young people injected new blood into the 42 year old revolution, relearning that the “Arab system” i.e. Arab League is worthless, that it’s the poor people of Libya who truly believe in the Revolution and are remaining loyal to it, and not to those with foreign bank accounts who NATO and the US were able to quickly threaten and pressure to defect.

The confidence that the peoples arms and their self-confidence will ultimately win this attempted occupation, the “rebels” have exposed the Muslim Brotherhood as a US partner and also has shown the true nature of the Jihadists, Al Qaeda and NATO itself; that the African Union has a key function to perform, that Libya is not divisible because of its social and economic interdependency; the realization that Libya must reform and reject the IMF system and learn from its mistakes in trusting the US and certain countries in 2002 when it gave up certain weapons systems and placed billions of dollars in American banks; a return to peoples capitalism, not government capitalism, and the need to become more self-reliant.

In addition, due to the crisis, Women have stepped forward and are surprising many by “taking charge” of many governmental functions and encouraging the population to defend their country. The youth of the country are following many much like themselves across the Middle East and are getting involved not just in defending their country but also in working on reforms, including the drafting of a Constitution in a convention being held in Tripoli next week. Libyans are saying that they have to rejuvenate their revolution and rely on themselves. Nearly everyone is claiming that Libya was deceived in the 2004 negotiations and agreement with the US and Western countries. They admit that they have paid a big price in terms of lives lost and infrastructure damage.

Libya also intends to continue their gold based currency project and continue improving relations with African countries. Libya’s squeezing the former French colonial power out of most of Africa is one motive of that country to seek regime change.

President Obama is likely to be defeated in 2012 according to former Bush advisor, Karl Rove and a swelling number of US political pundits. The US economy is very weak and unlikely to experience a significant recovery by Election Day. Key voter groups are rejecting Obama partly because of his war of choice in Libya which is seen as a bad strategic decision with NATO’s actions increasingly becoming a deadly farce with his justification increasingly ridiculed and the cost now more than 500 billion USD.

In addition, the unemployment is approaching 10% with close to 14 million Americans out of work with half of them having been without work for more than six months. They remember that Obama promised much better, declaring that his February 2009 stimulus would cause unemployment to peak at 8% by the end of summer 2009 and drop to roughly 6.8% today.

Gallup has reported Obama’s job approval rating this week at 45%, down from 67% at his inaugural. Among the groups showing a larger-than-average decline since 2009 are whites (down 25 points); older voters (down 24); independents and college graduates (both down 23), those with a high-school education or less, men, and Southerners (all down 22); women (down 21 points); married couples and those making $2,000-$4,000 a month (down 20). This all points to severe trouble in suburbs and mid-sized cities in states likes Colorado, Indiana, Ohio, Pennsylvania and Nevada.

Moreover, approval among younger voters has dropped 22 points, and it’s dropped 20 points among Latinos. Even African-American voters are less excited about Mr. Obama than they were and many deeply oppose his policies, and he tends to be weakest on issues voters consider most important. In the June 13 NBC News/Wall Street Journal poll, 56% disapprove of Mr. Obama’s handling of the economy. Fifty-nine percent in the Economist/YouGov poll of June 14 disapprove of how he’s dealt with the deficit.

The White House is reportedly becoming reconciled to the fact that Qaddafi may remain in the Libyan leadership. Whether Obama will be re-elected is increasingly uncertain.

Gaddafi has survived assaults of various types from US Presidents’ Ford, Carter, Reagan, George Bush 1, Clinton, George Bush 2, and Obama. Vegas book makers are giving odds he’ll be the leader of Libya’s Fatah Revolution after the voters retire Obama, whose broken promises included telling them that the US would be involved in Libya for days, not months.

Lawyer and former Board member of the Sabra-Shatila Foundation ; Director, Americans Concerned for Middle East Peace (Beirut-Washington D.C.) ; Former Professor of International Law at Northwestern College of Law in Oregon.