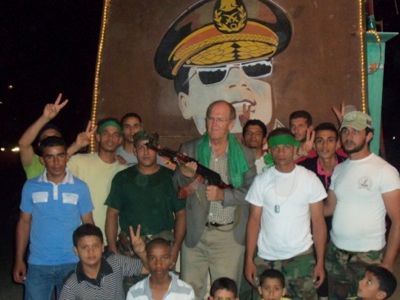 At ten a.m. Tripoli time on 6/28/11 the Libyan Ministry of Health made available to this observer its compilation entitled Current Statistics Of Civilian Victims Of Nato Bombardments On Libya, (3/19/11-6/27/11).

Before releasing their data, which will be made public this afternoon, it was confirmed by the findings of the Libyan Red Crescent Society and also by civil defense workers in the neighborhoods bombed, and then vetted by researchers at Tripoli’s Nassar University.

As of July 1, 2011, Military casualties have not been officially released by the Libyan armed forces.

In summary, the MOH compilation documents that during the first 100 days of NATO targeting of civilians, 6121 were killed or injured. The statistical breakdown is as follows: 3093 Men were injured and 668 were killed; Women killed number 260 and 1318 injured; Children killed number 141 and 641 injured. Of those seriously injured 655 are still under medical care in hospitals while 4,397 have been released to their families for outpatient care.

NATO claims that private apartments and homes, schools, shops, factories, crops, and warehouses storing sacks of flour were legitimate military targets are not believed by anyone here in Libya, and, to date, NATO has failed to provide a scintilla of evidence that the 15 civilians, mainly children and their aunts and mothers, who were torn to pieces by 8 NATO rockets in the Salman neighborhood last week were legitimate military targets.

Tripoli’s 3,200 neighborhoods, independently from the Libyan Armed Forces, are intensively preparing for the possibility that NATO forces or those they are seen as increasingly arming and directing, might invade the cosmopolitan greater Tripoli area during the coming weeks or months.

This observer has had the opportunity to visit some of these neighborhoods the past couple of nights and will continue to do so. As noted earlier, contrary to some media reports by the BBC, CNN and CBS, Tripoli’s neighborhoods during the cool evenings with wafting sea breezes, are not tense, “dangerous for foreigners and in control of trigger happy soldiers or militias.” The latter assessment is nonsense. Americans and others are welcomed and their presence appreciated. Libyans are anxious to explain their points of views, a common one of which is that they are not all about Qaddafi but about protecting the family, homes, and neighborhoods from foreign invaders. A majority does support the Qaddafi leadership which is what they received with their mother’s milk, but nearly all emphasize that for them and their friends it is very much about defending their revolution and country first. They appear to this observer to be very well informed about the motives of NATO and those countries that are intensively targeting their leader and their officials without regard to civilians being killed. It’s about oil and reshaping Africa and the Middle East.

Sitting and chatting with neighborhood watch teams are actually an extremely enjoyable way to learn about and to get to know the Libyan people and how they view events unfolding in their country. It certainly beats hanging out at “the bar” at the hotel where the western main stream media often gather their journalistic insights and pontificate about what “the real deal is” as one told me the other day. I could not figure out much that he was talking about.

On the evening of 7/1/11 as many as one million Libyan citizens are expected to gather at Tripoli’s Green Square to register their resistance to NATO’s intensifying civilian targeting blitz. Some western journalists will not attend this news event because they are afraid of potential danger or their stateside bureaus are suggesting they stay away “so as not to legitimize the gathering”. What has become of orientalist journalism?

The neighborhoods in Libya are preparing for a ground invasion and to confront directly the invaders with a plan that one imagines would not be unfamiliar to a General Giap of Vietnam or a Chinese General Lin Peio, being a massive peoples’ defense. It has been organized with a house by house, street by street defense plan for every neighborhood and will include all available weaponry.

The defenders are not military although many of the older ones had done one year compulsory service following high school. Their ranks include every able bodied woman and man from age 18 to 65. Younger or older will not be refused.

Following a Hezbollah model, they are organized into 5 person squads once they complete their training. It works like this: Anyone over 18 years of age can report to his neighborhood “Tent”. Knowing virtually everyone in the area, the person will make an application and will be vetted on an AK-47, M-16 or other light arm. Depending on her/his skill level, he will be accepted and given a photo ID that lists the weapons the applicant qualified on. If he needs more training or is a novice it is provided at the location which includes a training area, tent with mattresses for sleeping, a make shift latrine and canteen.

The basic training for those with no arms experience, including women, is 45 days. Past that, the commitment is four months. Each accepted individual is issued a rifle (normally an AK-47 “Klash” along with 120 rounds of ammo.) Each individual is asked to return in one week to discuss their training and show that they did not waste their bullets which cost around one dollar each. If approved, they will be issued more.

Those who begin their duty work one eight hour shift. Women tend to work during the day when kids are in school but I have seen many women also on the night shift. Most men have regular jobs and proudly explain than they volunteer one work shift daily for their country. They appear to be admired by their neighbors.

I agreed not to describe other weapons that will be used if NATO appears besides rifles, grenades, booby-traps, rocket propelled grenades (RPG’s) but they appear formidable.

But besides preparing for armed defense of their families and homes and neighbors, these neighborhood volunteer civil defense teams explained to me what their main work involves. When an area is bombed, they quickly help the residents exit their bombed building, get medical help on the scene for those who need it, help the families assure the frightened children that things are OK, make notes of needed repairs, provide temporary shelter nearby if needed, and countless tasks the reader can imagine would be required from a humanitarian, civilian perspective.

Each check point becomes a neighborhood watch security center for the community. Cars are cursorily checked, usually just the trunk. Often the drivers are known to the security forces, many of whom are university students, because they are also from the area. Occasionally a car will stop and a citizen will exit and deliver a tray of fruit or pastries or a pot of Libyan soup etc. A very congenial social atmosphere.

Because NATO has been increasing its bombing of these civilian manned checkpoints, about 50 of which are along the road from the Tunisian border to Tripoli, the neighborhood watch teams are now operating without lights at night.. Those on night duty have each been issued one of those small heavy duty five inch mini flashlights which have a powerful beam. This observer was presented one as a souvenir and can attest to its fine quality.

They are civilian because they are volunteers and the regular policemen and women have in large numbers joined an army unit hidden elsewhere.

In addition to its current problems, NATO will face another major one if they decide to invade Western Libya.

Lawyer and former Board member of the Sabra-Shatila Foundation ; Director, Americans Concerned for Middle East Peace (Beirut-Washington D.C.) ; Former Professor of International Law at Northwestern College of Law in Oregon.