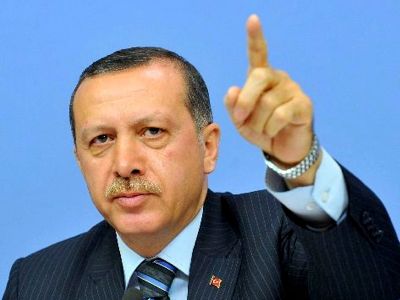 I would like to extend my greetings to you, and welcome you all to this press conference in which we will review recent developments in Libya.

As you are aware, we are following the developments in Libya with great sensitivity from the very beginning.

Libya has never been an ordinary country for us, nor have the Libyan people been a people among many others.

It could not be possible for us to remain indifferent to the developments in Libya. We could neither turn a blind eye to what’s happening nor abandon the Libyan people.

From the very beginning, we have attached utmost importance to the situation in Libya.

We refrained from populism, pretensions and pursuit of interest at the expense of Libya.

As I always put it, we were among those whose focus has been on the human beings above the ground, not on the oil below, as is the case with some others.

The social and political structure of Libya, its regional significance and its natural resources that attract the appetite of some countries obliged us to adopt our policy towards this country with utmost care and prudence.

Of course, the stance that the Government in Libya adopted in response to the popular unrest have also been another aspect that we have taken into consideration.

I have to underline this now:

Our stance in Libya has been completely based on human factor, aimed at preventing the bleeding of the nose of not even one single person.

We know that this humane stance of us has been misinterpreted and misperceived in Libya and in the eyes of the opposition and misrepresented by certain countries through a premeditated campaign.

A kind of anti-Turkish campaign was launched in Libya, in which Turkey’s policies were misrepresented and an attempt was made to foment resentment among the opposition members.

Nevertheless we kept our calm and common sense.

We have followed a coherent, stable and principled policy.

While we have continued dispatching all sorts of humanitarian assistance to the Opposition and keeping open channels of communication with them, we have also warned the Libyan Government on every occasion in order to refrain from bloodshed, massacres and to listen to the voices and aspirations of the people without delay.

My dear friends; Libya is passing through a very difficult period.

We have tried to help the Libyan people in overcoming this period with minimum damage and charting their course to safety. This is what we are working for now.

As we all know, a solution to the problem could not be found within Libya by the Libyans themselves. The international community was obliged to intervene when the safety of the civilians were endangered. Consequently, the UN Security Council adopted the resolutions 1970 and 1973, which are binding for all. Based on these resolutions, NATO established a no-fly-zone over Libya and launched a military operation to protect civilians.

Turkey has joined the enforcement of the arms embargo and the delivery of humanitarian assistance to Libyan people dimensions of the operation, as its conditions for demonstrable necessity, international legitimacy and regional participation and support were met.

On the other hand, proceeding from the premise that that the problem cannot be solved through military means alone and that it is essential to see to the achievement of a ceasefire, stoppage of the spilling of blood, and launching a political process to accommodate the legitimate aspirations of the Libyan people, we have drawn up a Road Map.

The main parameters of this Road Map, which I have announced on 7 April 2011, were as follows:

1. An immediate and genuine ceasefire, withdrawal from the cities of the military elements affiliated with the Government, lifting of the sieges, resumption of electricity, gas and water supply to all cities and regions.

2. Formation of secure humanitarian zones which will provide unimpeded humanitarian aid flow to all our Libyan brothers without discrimination.

3. Urgent launching of an all-inclusive process of democratic change and transformation which takes into consideration the legitimate interests of the entire Libyan people.

We have articulated our Road Map in light of diplomatic contacts we have pursued since then. We have consulted with the National Transitory Council in Libya and gained the support of the international community to our Road Map.

From the outset of the crisis, we have been in contact with the Libyan Administration in Tripoli. We have conveyed our sincere messages to Muammar Qaddafi in each of our contacts.

From the very beginning, we have stated that he should step down and that a person who could be named by the consent of everyone in Libya should take over the administration so that peace and stability could be restored.

Most recently, in the roadmap that we have announced, we have made it clear that Qaddafi must step down to ensure transition to constitutional democracy.

All our initiatives guided by common sense and prudence were unfortunately not heeded by the Tripoli Administration.

Instead of heeding our warnings, avoiding bloodshed and striving to preserve Libya’s territorial integrity, Muammar Qaddafi preferred blood, tears and attacking against his own people.

A new era has started in the history of Libya.

We are lost for words in the Libyan question.

What is needed to be done at this juncture by Muammar Qaddafi who stills holds the power in Tripoli is to step down immediately by fulfilling his historic responsibility as well as his humane and conscientious responsibility.

Muammar Qaddafi must now take this historic step for the sake of Libya’s future, territorial integrity, peace and serenity.

Under the present circumstances, the most appropriate way out is to return the power to its true owner, i.e., the people.

The blood shed in Libya is the blood of Libyans.

The blood spilt in Libya is the blood of brothers.

No future, freedom, peace or justice can be built upon blood, especially the blood of brothers.

We therefore wish to see the Libya’s Leader step down and leave Libya immediately for his own sake and for the sake of his country’s future without causing further bloodshed, tears and destruction.

The pain for the loss of a son or daughter is the biggest suffering of all. As a father, we are cognizant of the acuteness of the grief Qaddafi is living through.

We would like him to see and feel that the Libyan people is experiencing the same grief and we would like to remind him that he is obliged to take this step now in order to avoid further suffering.

On this occasion, I would like to appeal to the Transitional National Council in Benghazi and to the Libyan brothers who are struggling hard for bringing to their country a new order based on democracy.

It is of utmost importance that your struggle and your sufferings lead to an outcome which embraces all Libyans.

Your struggle is the struggle for a free and democratic Libya whose sovereignty and territorial integrity is preserved and strengthened and for a Libya which takes the place it deserves in the international community.

Turkey will continue its endeavors for ending the sufferings of the Libyan people.

It is our ultimate wish that the Libyan people immediately obtain the rights, laws, freedom and justice which they have aspired for. Our contribution and support for the fulfillment of this wish will continue.

It is a priority for us that the Libyan people determine its future in unity and solidarity.

In this direction, in order to put into effect the elements in the Road Map, we will continue to be in close contact with the Transitional National Council.

We will continue our cooperation with the international community on the Road Map which, we believe, will pave the way for a solution in Libya, benefitting also from the meeting of the Libya Contact Group which will be held in Rome on 5 May.

At this point, I would like to reiterate once more our warnings that we always voice for the countries in the region, including Libya:

Equality, freedom, justice and democracy are the legitimate and natural rights not only for some countries, some peoples, but for all humans and of all humanity.

In our geography, we no longer want to see bloodshed, tears, pressure and oppression.

While the world is rapidly changing, we believe it is never sustainable, never humane that the countries in our region put pressure on their peoples with a mind-set that postpones and delays basic rights and freedoms.

We believe in a complete and perfect justice, where the right of an individual is not sacrificed even if it is for all humans and where one innocent life is kept above all concerns of power.

We don’t want to see the Islamic world as associated with bloodshed, tears, and especially with terrorism.

Leaders must take responsibility, make sacrifice, choose the humane and conscientious path with a view to changing the face, fate and image of these lands. While doing so, they should be inspired by the ancient civilizations of these lands.

This is also what we expect, what we want to hear and see from Libya and from the other countries.

We, as Turkey, will continue to defend peace in our region and emphasize human values.

We will continue to contribute to peace and stability in our region through our principled, coherent, resolute, honorable foreign policy.

I want to thank you for attending and I would like to offer you my sincere greetings.