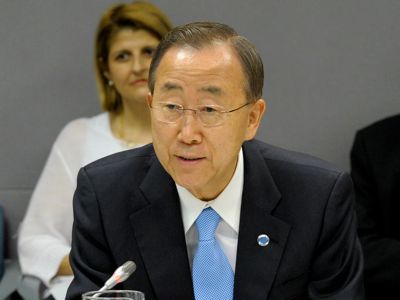 The following statement was issued today by the Spokesperson for UN Secretary-General Ban Ki-moon:

The Secretary-General is deeply concerned by reports of the unacceptably large number of civilian casualties as a result of the conflict in Libya. He expresses his sincere sympathies and solidarity with the Libyan people, in particular those who have lost loved ones in the recent attacks carried out in the country. The Secretary-General calls on all parties to exercise extreme caution in their actions, in order to minimize any further loss of civilian life.

He once again reiterates his strongly held belief that there can be no military solution to the Libyan crisis. A ceasefire that is linked to a political process which would meet the aspirations of the Libyan people is the only viable means to achieving peace and security in Libya.

The Secretary-General urges all Libyan parties to immediately engage with his Special Envoy, Abdel-Elah al-Khatib, and respond concretely and positively to the ideas presented to them, in order to end the bloodshed in the country.

Source : “Ban Ki Moon Statement to all parties of the conflict in Libya”, by Ban Ki-moon, Voltaire Network, 11 August 2011, www.voltairenet.org/article171113.html

Remarks by Ban Ki-moon at the 68th UN General Assembly

Source : “Ban Ki Moon Statement to all parties of the conflict in Libya”, by Ban Ki-moon, Voltaire Network, 11 August 2011, www.voltairenet.org/article171113.html