From Tripoli, Thierry Meyssan reports on the carnage he is witnessing. Article posted on Monday, at 0:35 AM. 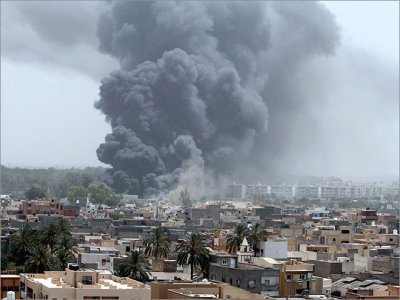 On Saturday, 20 August 2011, at 8:00 PM, that is to say just after the Iftar, the breaking of the Ramadan fast, the Atlantic Alliance launched "Operation Mermaid Dawn."

The Sirens were the mosque loud speakers which were used to launch Al Qaeda’s call to revolt against the Gaddafi government. Immediately, rebel "sleeper cells" went into action. Organized in small, highly mobile, groups, they carried out multiple attacks. The overnight combats left 350 dead and 3000 wounded.

The situation stabilized on Sunday during the course of the day.

The fighting started on Sunday night, reaching a rare degree of violence. NATO drones and aircraft kept bombarding in all directions. NATO helicopters strafed civilians in the streets with machine guns to clear the way for the jihadis.

In the evening, a motorcade of official cars carrying top government figures came under attack. It pulled into the Rixos Hotel where the foreign press is based. NATO did not dare to bomb the hotel to avoid killing its own journalists. Nevertheless the hotel, which is where I am staying, is now under heavy fire.

At 11:30 PM, the Ministry of Health could only announce that the hospitals were full to overflowing. By early evening there were 1300 additional dead and 5000 wounded.

NATO has been entrusted by the Security Council to protect civilians. In reality, France and the UK have just re-started their colonial massacres.

Monday, 1:00 AM: Khamis Qaddafi came to the Rixos Hotel personally to deliver weapons for the defense of the hotel. He then left. There is now heavy fighting all around the hotel.