Libya and beyond: How did we get there and what happens next?

Rep. Dennis Kucinich, D-Ohio, has been an outspoken critic of U.S. military action in Libya from the outset, even calling President Obama’s policy “an impeachable offense.” Now, as Muammar Gaddafi’s regime appears to be toppling, Kucinich is ramping up his criticism with the contention that NATO commanders should be tried in court for "all civilian deaths resulting from bombing." 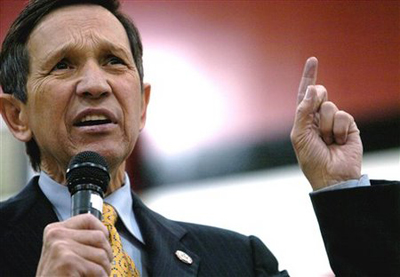 Libyan rebels have entered Tripoli. As gun battles break out across the city, it is timely to enter into a discussion as to how the rebels arrived there. It is time to review the curious role of NATO and the future of US interventionism.

A negotiated settlement in Libya was deliberately avoided for months while NATO, in violation of UN Security Council (UNSC) Resolutions 1970 and 1973, illegally pursued regime change. NATO chose sides, intervened in a civil war and morphed into the air force for the rebels, who could not have succeeded but for NATO’s attacks.

NATO acted with impunity. The NATO command recklessly bombed civilians in the name of saving civilians. Usurping the United Nation’s traditional role, NATO looked the other way as the arms embargo was openly violated by U.N. member nations.

We were reminded Libya had spent ’forty years under a tyrant.’ We were urged to remember the destruction of Pan Am Flight 103 over Scotland, which occurred 23 years ago this December 21st. Yet almost 20 years later, on November 18, 2008 the Associated Press reported that President George Bush called Colonel Gaddafi personally "to voice his satisfaction that Libya has settled a long-standing dispute over terrorist attacks, including the bombing of a Pan Am jet over Scotland."

On December 19, 2003 Libya voluntarily gave up its nuclear weapon-making capability and on January 6, 2004 ratified the Comprehensive Test Ban Treaty. Its relationship with the US on the mend, Libya then opened up to international investment and began the wholesale privatization of its industries, leading to massive unemployment and dissatisfaction with the state of things, particularly among younger Libyans.

I mention this not to sympathize with Colonel Gaddafi’s brutality or to minimize the great tragedy of Flight 103. But if the US had come to terms with Gaddafi’s past violence, why does the Obama Administration invoke it as justification for an attack on Libya? One conclusion could be that the reasons for the March 2011 attack were bogus.

Once into the war, the Administration promptly passed off nominal responsibility for the war to NATO, after beginning the war without congressional authorization. NATO became the beneficiary of US funds, US war planes, US drones, US bombs, and US intelligence assets.

NATO violated UNSC resolutions. The Obama Administration violated the US Constitution by bypassing Congress on the war. These are not mere academic matters. They have moved the world community from the rule of law to the rule of force and have set a precedent for NATO to become the new global-cop. Far from bringing a new level of security to the world scene, NATO has brought a new level of insecurity and unaccountability.

The question of the reason for United States’ involvement in Libya remains.

Was the United States’ Central Intelligence Agency involved in planning for regime change prior to events in February and March in Benghazi? Did the CIA and its assets have a role in fomenting a civil war?

Was the United States, through participation in the overthrow of the regime, furthering the aims of international oil corporations in pursuit of control over one of the world’s largest oil resources?

Did the United States at the inception of the war against Libya align itself with elements of al Qaeda, while elsewhere continuing to use the threat of al Qaeda as a reason for US military intervention, presence and occupation?

In the case of Libya, now that NATO, with the help of the US, has brought the rebels into the streets of Tripoli to fight, what follows? What’s the plan? Who governs and for whose sake? Will Libya become NATO’s protectorate?

It is not only the Gaddafi compound in Tripoli that will be left in ruins by NATO’s actions; it will also be the Obama Administration’s relationship with the African Union (AU). The AU and its member nations have been repeatedly rebuffed by the US in its efforts to bring about a peaceful, negotiated settlement for the regime’s transition out of power. While the US, through NATO, has been bombing Libya, China has spent time building commercial opportunities across the African continent.

As the Administration indulges itself with wars in Libya, Iraq and Afghanistan - spending hundreds of billions of dollars on military adventurism - the United States has massive economic problems at home. Resources which should be spent creating jobs in America are going to perpetuate war abroad. Resources which should be used to build bridges in America continue to be used to bomb bridges elsewhere.

Millions of Americans are begging for a chance to earn their daily bread while the government spends its money on daily bombing. While the government has yet to produce a viable jobs program to put millions of unemployed back to work, the waste of resources on war is guaranteed to continue: The Iraq and Afghanistan wars are NOT to subject to spending caps in the budget. The American people get myths, rhetoric and unemployment while war profiteers get the gold. Can you imagine what the people of Libya will get?

Congressman Dennis Kucinich interviewed on 15 April 2011 by Paul Jay, CEO and founder of The Real News.

Source : “Libya and beyond: How did we get there and what happens next?”, by Dennis J. Kucinich, Voltaire Network, 26 August 2011, www.voltairenet.org/article171225.html

Source : “Libya and beyond: How did we get there and what happens next?”, by Dennis J. Kucinich, Voltaire Network, 26 August 2011, www.voltairenet.org/article171225.html