American democracy has been hijacked by a secret government that many researchers have identified as being a powerful oligarchy that manipulates from behind the scenes the very essence of the state, controlling the financial wealth of the country beyond the reach of any State institution. Printing money indiscriminately and creating wealth out of thin air, this unscrupulous elite has ruined the economy and generated the biggest bubble in history, that of the dollar, which will fatally knock it off its pedestal of world reserve currency.

Timothy Geithner (left), US Secretary of the Treasury, and Ben Bernanke (right), Chairman of the Federal Reserve (Fed), photographed in April 2010 are the public figureheads a secret government that wields billions of dollars at will.

We now have concrete evidence that Wall Street and Washington are running a secret government far removed from the democratic process. Through a freedom of information request by Bloomberg News, the public now has access to over 29,000 pages of Fed documents and 21,000 additional Fed transactions that were deliberately hidden, and for good reason. [1]

These documents show how top government officials willfully concealed from Congress and the public the true extent of the 2008-’09 bailouts that enriched the few and enhanced the interests of giant Wall Streets firms. Here’s what we now know:

Knowledge of the secret bailout funds was not shared with Congress even while it was drafting and debating legislation to break up the big banks.

The secret loans financed bank mergers so that the largest banks could grow even larger. The money also allowed banks to step up their lobbying efforts.

While Henry Paulson (Bush’s Secretary of the Treasury) was informing Congress and the public that only minor reforms were needed to protect Fannie and Freddie from collapse, he met secretly with leading Wall Street hedge fund managers — among them his former colleagues at Goldman Sachs — to alert them that he was about to nationalize the giant mortgage companies – a move that would eradicate nearly all the stock value of the companies. This information was enormously valuable because it allowed these hedge funds to short Fannie and Freddie and thereby make a fortune.

While Timothy Geithner was head of the NY Federal Reserve, he argued against legislative efforts by Senator Ted Kaufman, D-Delaware, to limit the size of banks because the issue was “too complex for Congress and that people who know the markets should handle these decisions,” Kaufman recalls. Meanwhile, Geithner was fully aware of the enormous secret loans while Senator Kaufman was kept in the dark. Barney Frank, who was authoring key bank reform legislation was also not informed of the secret loans. No one in Congress was told.

So what does this all mean?

1. The big banks and hedge funds were in much more trouble than we were led to believe.

As many of us suspected, all the big banks were on their knees begging for help – secretly – while telling their investors, the public and Congress that all was well. They had gambled and lost. Under the rules of ideal capitalism, they should have suffered some “creative destruction,” and seen their shareholder value eliminated through bankruptcy, and their managers replaced. The entire banking system should have been reorganized from top to bottom as well. Instead, these colossal failures were secretly rewarded.

2. Wall Street’s secret government made sure the largest banks would grow even larger, aided by the secret funding.

While Congress was debating legislation to break up the large banks and reinstitute Glass Steagall (to separate risky investment banking from insured commercial banking,) the secret government was using public funds to grow even larger through mergers and acquisitions. Because Congress and the public were unaware of the secret funding and ill-health of all the banks, the legislation was easily defeated. As the chart below makes painfully clear, too-big-to-fail banks grew even bigger. 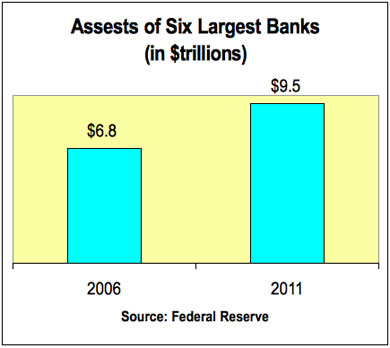 3. The bigger Wall Street becomes, the more government it can buy.

This part isn’t secret. As the top six banks grew larger, they spent more funds lobbying to make sure that they wouldn’t suffer any unprofitable impacts from banking reform legislation. So after the biggest banks received hundreds of billions in secret loans, they upped their lobbying funds to maintain their size and power. Read ‘em and weep: 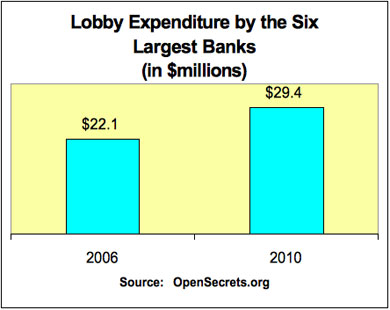 At first, it’s not easy to understand how Treasury Secretary Paulson, the former head of Goldman Sachs, could risk attending a secret meeting with giant hedge fund managers, many of whom used to work at Goldman Sachs. How could the nation’s highest ranking financial official dare to tip off these hedge fund elites about the imminent government takeover of Fannie and Freddie before Congress and the public were informed? Well, one answer is that Paulson felt obliged to warn his old comrades of the impeding nationalization. Maybe, he wanted to get them out of harm’s way just in case they were heavily involved in those markets. Or maybe he also wanted to give them a very valuable tip to profit by. But the deeper explanation, I believe, is that Wall Street’s key government officials – Paulson, Summers, Geithner, Orszag (the former Obama OMB chief who now makes millions working for CitiGroup), etc. truly believe the following:

Wall Street banks are the best in the world and are the cutting-edge of the American economy. They are our future.

Wall Street bankers and hedge fund managers are enormously smarter and sharper than the rest of us. They deserve our admiration.

Helping Wall Street to grow and prosper is precisely the same thing as helping all Americans and the entire economy. They deserve our support.

Secret meetings to provide insider information are normal on Wall Street. There’s nothing wrong with warning your friends about upcoming policy decisions that might impact their profits.

There’s also absolutely nothing wrong with providing trillions of dollars of secret loans to the best and the brightest and not telling Congress about it.

And all this is deeply believed by Wall Street and its secret government, even though Wall Street, and Wall Street alone, took down the economy and killed 8 million jobs in a matter of months. Simply brilliant!

5. Wall Street is a clear and present danger to democracy.

Usually, I am not an alarmist. In fact, I often argue against facile conspiracy theories. I want to believe that our democracy still has promise. But, the Wall Street-induced crash and the government’s response to it has me very worried. The Bloomberg News revelations suggest that Wall Street’s secret government has enormous disdain for what remains of our democracy. The financial elites obviously believe that Congress cannot be trusted to do the right thing even when it is bought and paid for by the very banks it supposedly regulates. As for the rest of us? We’re just a financially illiterate mass to be manipulated through the mass media. Our minds too can be bought and sold through careful marketing.

6. Occupy Wall Street is fundamentally correct, but we need more.

The occupiers dramatically attacked Wall Street elites and captured the country’s imagination with their 1 percent, 99 percent framework. And the idea is sticking and spreading. But that’s only the start. To reclaim our country from Wall Street’s secret government we will need to develop an enormous movement among the 99 percent. Although we hope it just happens spontaneously through Twitter and Facebook, we all know it will require hardcore organizing involving millions of us.

At the moment, no one knows what form it will take. But we do know this: great concentrations of power and wealth do not give up their power and wealth without an enormous fight. Wall Street’s secret government is more than ready to protect itself, even if it means subverting democracy. Our occupiers have shown great courage in helping us reclaim our democratic rights. Let’s hope it spreads…and soon.

Les Leopold is the executive director of the Labor Institute and Public Health Institute in New York, and author of The Looting of America: How Wall Street’s Game of Fantasy Finance Destroyed Our Jobs, Pensions, and Prosperity and What We Can Do About It ediciones Chelsea Green, 2009.