The case of South Sudan is an exemplary illustration of the success of Israeli strategy in Africa. Relying on the armed forces of the United States, as in Iraq and Libya, the Hebrew state and its ally have been able to divide the country and thereby eject their most important commercial rival, China, from the part of Sudan richest in resources. Symbolically, the media promotion of this operation fell to the Hollywood actor, George Clooney, prodigal son and spokesperson for the marriage of convenience linking Israeli and American colonial interests. 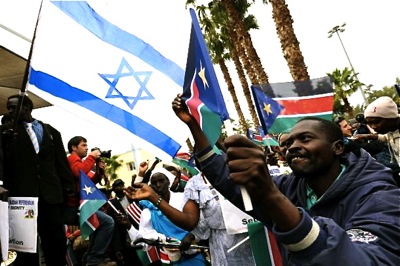 After the spectacle of George Clooney [1] in handcuffs unfolded in front of the North Sudanese Embassy in Washington, it was Hillary Clinton’s turn on the stage to express, eyes brimming with tears, the deep concern of the United States for the humanitarian crisis and for the innumerable victims in South Sudan. Touching as these scenes from the official Washington fiction may be, and destined as they are for the global media, the truth is completely different.

For decades the United States and Israel supported secessionist forces in what was then southern Sudan until 2005, when North and South signed an agreement considered by the Bush Administration to be a significant triumph in its foreign policy. The Obama Administration has since reaped the fruits. On July 9, 2011, South Sudan proclaimed its independence. A new state was given birth, consisting of an area of more than 232,000 square miles (an area larger than France and double that of Italy), one with scarcely 8-9 million inhabitants. In severing itself from the rest of the country, South Sudan acquired 75% of Sudanese oil reserves.

But it is the North that possesses the oil pipeline through which Southern petroleum passes to the Red Sea for export. This is the source of contention between the two governments concerning the sharing of oil revenues, enflamed as well by the issue of control over border zones that are nearly 1000 miles long, a confrontation that is carried on, as well, by armed local groups.

In all of this, the United States continues to play the key role. South Sudan is increasingly embedded in INMET, the International Military and Education Program administered by Africom with funds from the U.S.Department of State which trains 10,000 African "military and civilian leaders" in 150 military schools each year.

Simultaneously, and also under Washington’s sponsorship, the project for a new energy corridor is about to be completed. The project, consisting of a pipeline, a highway and a rail line, will allow the transport of oil from South Sudan to the Kenyan port of Lamu. The advantages of this to Washington are manifold. On the one hand, in bypassing the North Sudan pipeline, it strikes a grave blow to a country already weakened by the loss of 2/3rds of its oil reserves, threatening to provoke the collapse of the Khartoum government. On the other hand, it also marginalizes Chinese companies which along with several Indian and Malaysian firms, were extracting Sudanese oil. In this way, the bulk of the reserves can be controlled by American and British companies.

South Sudan not only has petroleum. It has rich deposits of gold, silver, diamonds. uranium, chrome, tungsten and quartz ready to be mined to which must be added some 124 million acres of arable land which can draw abundant water from the Nile. All a windfall for multinationals whose interests are protected by the new government of Juba, whose reliability is guaranteed not only by Washington but also by Tel Aviv.

A significant fact: South Sudan will open its embassy in Jerusalem, thereby acknowledging it as the capital and Israel will "train" thousands of South Sudanese refugees before repatriating them. Meanwhile, the government of Juba, among its first acts, chose English and not Arabic as the official language and is demanding entrance into the British Commonwealth. A neo-colonial entity has thus been added to the old ex-colonies of the African continent.