Pulling off the American Emperor’s Clothes Thread by Thread

Secessionist rumblings have been getting louder in the United States as disaffection with the federal government has amplified. Wayne Madsen canvasses the growing tide of disunionist tendencies in the United States, which he deems may realistically result in the gradual splintering of the country into separate entities, just like those that the United States caused to bring about in many states around the world in pursuit of its imperialist agenda. What goes around comes around, suggests the author.

In April 2009, Rick Perry, the Republican governor of Texas, suggested that his state might ponder secession if “Washington continues to thumb their nose at the American people.” In response, the audience began to chant, “Secede, secede.”

The United States, which sought to capitalize politically, militarily, and financially from the break-up of the Soviet Union, Yugoslavia, Sudan, and Czechoslovakia and now seeks to reap the benefits from the similar potential fracturing of the Russian Federation, China, Libya, and Iraq, may receive a taste of its own medicine.

Across the United States, there are increasing calls for secession from a federal government that is not providing for the common welfare of the people. Republicans, joined by a number of corporatist Democrats, are echoing the austerity push in Europe to sell-off public assets to vulture capitalists at rock bottom prices. Calls by corporatist politicians to privatize the U.S. Postal Service, AMTRAK, the Tennessee Valley Authority, and even public schools will have the effect of divorcing most Americans from any regular contact with their federal government. Such a development will nurture current movements that call for secession from the United States and seed nascent emergent movements.

One of the latest regions where there are increasing calls for secession is a unique linguistic and cultural region that was decimated by the British Petroleum (BP) Deepwater Horizon oil disaster two years ago. Many of the French Creole-speaking inhabitants of the Cajun region of southern Louisiana now openly talk about leaving the rest of Louisiana and the United States after the state and federal government failed to protect them from the effects of the British petrol company’s oil deluge and the subsequent use of the oil dispersant Corexit, a deadly combination that dealt a fatal blow to the area’s seafood and tourism industries.

The U.S. Coast Guard, which became a virtual law enforcement arm for BP, is looked upon as a foreign military force by the Cajuns, people descendant from French Acadians who forcible deported in the 18th century from French Maritime Canada to Louisiana by a conquering British military force. Many Cajuns, concerned that BP would like to see them forcibly removed from their coastal and bayou homeland of southern Louisiana, vow that they will not allow the British remove them again. And, after the protection and assistance afforded to BP by the Democratic Obama administration and Republican administration of Louisiana Governor Bobby Jindal, the latter as subservient to British corporate interests as any Indian amah housemaid for a British East India Company colonial lord during the Raj, the Cajun people realize they can, with their energy resources and even a crippled seafood industry, make it on their own.

The Cajuns of Louisiana came from Nova Scotia as a result of the “Great Derangement of 1755” when these French pioneers of northeastern Canada were forced to either swear allegiance to the British Crown or be deported.

Cajun Louisiana, or “Léta de la Lwizyàn” in the French Creole language, has the necessary requirements for sovereignty and self-determination under international law that has been codified since the Peace of Westphalia. The people of Lwizyan have a common ethnicity, history, and culture – all a requirement for sovereignty, plus a defined geographical region, which is basically the region of Louisiana south of Interstate 10. After the federal and state governments’ abysmal reaction to both Hurricane Katrina and the BP oil blow-out, both of which resulted in a district threat to the Cajun way of life, Lwizyan also has a human rights grievance against their governing political entities. Such human rights grievances have been used by the international community to justify the independence of such nations as Bangladesh, Israel, South Sudan, Kosovo, and East Timor.

Louisiana’s unique French culture has prompted it to take part in a number of international organizations, along with other francophone nations and regions, including France, the Wallon region of Belgium, and the Canadian provinces of Quebec, New Brunswick, Prince Edward Island, and Nova Scotia. Through observer status in the Francophone Community, French Creole-speaking delegates run shoulders with other French-speaking officials from nations as diverse as Haiti and Mauritius and Vanuatu and Switzerland.

Not only may Lwizyan ultimately take its seat in the UN General Assembly between Luxembourg and Madagascar, but there are other parts of the American empire that have legitimate reasons to break ties with rule from Washington, DC and join the international community as independent states.

Among the first candidates for independence are states and regions with legitimate reasons, including treaty provisions, to go it alone. Native American tribes that signed treaties as sovereign nations with Washington have historical and legal reasons to sever their ties with Washington. Many of the 525 federally-recognized Native American tribal nations possess the requirements to justify sovereignty and self-determination: common ethnicity, history, culture, a defined geographical region, and a long history of human rights grievances, including genocide, against the United States. The Lakota Sioux Nation (which seeks an independent Republic of Lakotah), Iroquois Nation (Haudenosaunee), Navajo Nation, and Hopi Nation have openly advocated for greater independence from American government oppression. The Iroquois have even issued their own passports, a move that was rejected by the Obama administration and American allies like Britain.

Hawaii, which lost its independence as a result of naked American aggression and the abolition of the Hawaiian monarchy, has a strong movement to restore Hawaiian independence. Similar independence movements in overseas territories such as Puerto Rico, Eastern Samoa, and Guåhån (which Washington continues to erroneously call by its colonial name, Guam, and not by its Chamorro name) are gaining in popularity. Hawaii. Guahan, Eastern Samoa, and Puerto Rico were acquired by the American empire during the United States’ 19th century grab for colonial possessions.

There are other American secession movements but many are merely screens and contrivances for racists, including groups that advocate the restoral of Southern Confederate independence and independence for Texas. However, there are other more legitimate secession movements that are based on historical precedent. The Second Vermont Republic seeks the restoration of the independence of the short-lived First Vermont Republic that existed from 1777 to 1791. A number of secessionists have run for statewide office in Vermont.

The Alaska Independence Party, which is a libertarian party, advocates the independence of Alaska, a former Russian territory that was bought by the United States during the American Civil War. Supporters of Alaskan independence refer to the referendum of 1958, in which Alaskans were asked whether they wanted statehood, independence, commonwealth status, or remain a territory. Independence supporters seek another referendum with the same options.

Separatists in Washington state and Oregon seek to join Canada’s British Columbia to form the independent nation of Cascadia. And there are more than a few Californians who would like to resurrect their once briefly independent nation, the name of which appears on the California state flag: “California Republic.” 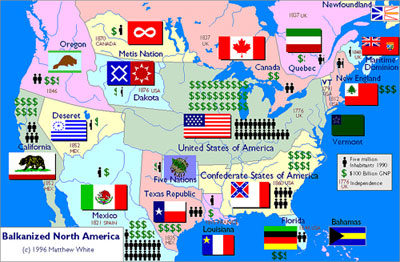 With calls for the abolition of Social Security, Medicare, the U.S. Postal Service, federally-funded public education, AMTRAK, and even the National Park system, Americans will increasingly find the federal government to be a useless entity that has sold off the public “commonwealth” to unscrupulous bankers and vulture capitalist investors. When Americans realize that the United States of America is a worthless encumbrance on their rights, we may hear the President of the UN General Assembly, perhaps a foreign minister of Scotland or Quebec, welcoming the independent nations of Leta de la Lwizyan, Guahan, Kalahu’i Hawai’i, and the Republic of Lakotah to take their seats in the General Assembly. The phrase “United States of America” will become as meaningless then as the “Union of Soviet Socialist Republics” and the “Socialist Federal Republic of Yugoslavia” are today.

The American Emperor, after his outer and inner threads have been pulled, will be nothing more than a naked representative of stark imperialism, colonialism, fascism, and militarism and will be justly buried in a pauper’s grave.

Investigative journalist, author and syndicated columnist. His columns have appeared in a wide number of newspapers and journals. Madsen is a regular contributor on Russia Today. He has written The Handbook of Personal Data Protection (London: Macmillan, 1992); Genocide and Covert Operations in Africa 1993-1999 (Edwin Mellen Press, 1999); Jaded Tasks: Big Oil, Black Ops & Brass Plates and Overthrow a Fascist Regime on $15 a Day and co-authored America’s Nightmare: The Presidency of George Bush II (Dandelion, 2003).

European Political Influence Operations Are «Made in USA»

CIA: Undermining and Nazifying Ukraine Since 1953

America Refuses to Face up to Its «Death Squads» in Blue

Obama’s «Diplomacy» Masks His Bullying at Jamaica and Panama Summits