The White House has put in writing its policies for sub-Saharan Africa. The problem is, there’s hardly a word of truth in the document, and not a single mention of AFRICOM, the U.S. military command on the continent. The presidential paper repeats Obama’s 2009 lecture to Africans on “good governance.” He also warned that they avoid the “excuses” of blaming “neocolonialism” and “racism” for their problems. Meanwhile, AFRICOM is “positioning the U.S. to launch coups at will against African civilian, or even military, leaders that fall out of favor with Washington.”

In 2008, Barack Obama made history as the first black President in the United States of America. Three years later, he has made history again, this time as the first US President to establish a permanent US military presence on the African continent. He is seen here with General Carter Ham who serves as the second and current Commander, U.S. Africa Command. He directed the initial 2011 military intervention in Libya, the first war actually commanded by AFRICOM.

President Obama, that imperialist son-of-a…um, Kenyan, last week unveiled what he described as a “new” U.S. Strategy Toward Sub-Saharan Africa. The White House report does not once mention AFRICOM, the U.S. military command that has pushed aside the State Department as the primary institution of U.S. policy and power in sub-Saharan Africa. The report [see attached document] comes three years after Obama’s trip to Ghana, when he declared that Africa’s biggest problems were “corruption and poor governance,” rather than five centuries (and still counting) of Euro-American predation. African complaints about “neo-colonialism, or [that] the West has been oppressive, or racism” are mere “excuses,” said Obama, in a performance that scholar Ama Biney described as “imperialist lecturing” and “Obama-speak.”

Having effectively abandoned even the pretense of competing with China, India, Brazil and other rising economic powers in Africa, the Obama regime has turned the continent into a battleground, where AFRICOM is the principle interlocutor with the region’s governments and peoples. In addition to conducting year-round military maneuvers with nearly every nation on the continent, AFRICOM handles much of U.S. food distribution and medical aid to the region, while the CIA monitors Africa’s vast expanses with a network of secret airstrips and surveillance aircraft. 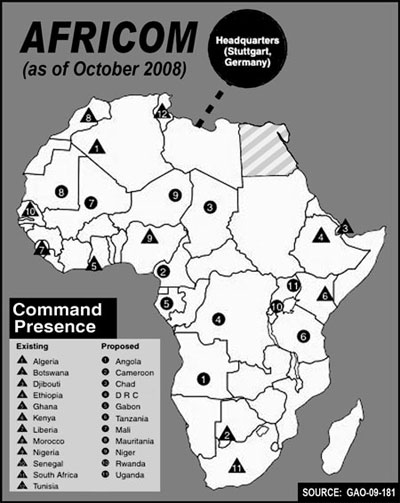 The White House report, a document of pure obfuscation, puts U.S. efforts to “strengthen democratic institutions” at the top of the list. It rehashes Obama’s Ghana declaration, that “Africa does not need strong men, it needs strong institutions.” Yet, Washington’s closest allies in sub-Saharan Africa are Paul Kagame, the minority Tutsi warlord in Rwanda; Yoweri Museveni, who rose to power with a guerilla army of child-soldiers and locked up two million Acholi people in concentration camps; and Ethiopian strongman Meles Zenawi, a military dictator who heads an ethnic-based regime. Rwanda and Uganda are the principal culprits in the deaths of six million Congolese since 1996, the worst genocide since World War Two, while Zenawi’s 2006 invasion of Somalia, instigated by the United States, led to “the worst humanitarian crisis in Africa – worse than Darfur,” according to United Nations observers.

The text of the president’s statement on the “new” sub-Saharan strategy warns that “the United States will not stand idly by when actors threaten legitimately elected governments or manipulate the fairness and integrity of democratic processes, and we will stand in steady partnership with those who are committed to the principles of equality, justice, and the rule of law.” In the context of Obama’s humanitarian military intervention doctrine – and especially since AFRICOM led NATO’s regime change in Libya – this is war talk.

In another sense, however, it is, quite simply, pure crap. Rwanda has for 16 years destabilized and spread genocidal chaos in neighboring Congo, in blatant violation of a U.S. law specifically tailored to curtail and punish those activities. The Democratic Republic of The Congo Relief, Security and Democracy Promotion Act, written by then-Sen. Barack Obama and co-sponsored by his colleague Hillary Clinton, now Secretary of State, authorizes the Secretary of State to withhold U.S. aid “if the Secretary determines that the government of the foreign country is taking actions to destabilize the Democratic Republic of the Congo." The Obama administration, like its predecessors, not only disregards its own policy statements – it ignores laws passed by the president and the chief foreign policy officer.

The White House claims the U.S. has made Africa a safer and more just place “by strengthening institutions and challenging leaders whose actions threaten peaceful political transitions, including in Cote d’Ivoire” – where the U.S. and French accomplished armed regime change.

Obama brags that: “We have been the world’s leader in responding to humanitarian crises, including in the Horn of Africa, while at the same time working with our African partners to promote resilience and prevent future crises.” In reality, George Bush and Ethiopia’s Meles Zenawi ended Somalia’s brief period of peace under an Islamic Courts regime, plunged the country into “the worst humanitarian crisis in Africa,” and then, under Obama, withheld food from Somalia in order to weaken the Shabaab resistance, all of which set the stage for an even worse famine in 2011, killing hundreds of thousands. Such realities give the lie to Obama’s promise to “work to prevent the weakening or collapse of local economies, protect livestock, promote sustainable access to clean water, and invest in programs that reduce community-level vulnerability to man-made and natural disasters.” AFRICOM and U.S. policy are the disasters afflicting the continent; they are part of the disease, not the cure.

During the winter following his Africa visit in 2009, Obama took the lead in destroying all prospects for slowing global warming, at the Copenhagen climate talks. But he still wants to peddle American “green” products (and natural gas fracking) to a scorched Africa. “We will continue promoting resilience and adaptation to impacts of climate change on food, water, and health in vulnerable African countries, supporting the adoption of low-emissions development strategies, and mobilizing financing to support the development and deployment of clean energy,” said the White House report. South African Archbishop Desmond Tutu had his own interpretation of U.S. climate policy. Africa, he said, “is to be condemned to incineration and no modern development.”

Obama assures Africa that: “The United States will seek to expand adherence to the principle of civilian control of the military.” In practice, AFRICOM has cultivated a “soldier-to-soldier” policy between U.S. troops and African militaries that extends from “general-to-general” to “colonel-to-colonel” and down the ranks, positioning the U.S. to launch coups at will against African civilian, or even military, leaders that fall out of favor with Washington. As Dan Glazebrook recently wrote in The Guardian, America’s “great hope is that the African Union’s forces can be subordinated to a chain of command headed by AFRICOM.”

As with George Bush, the death of millions and the erasure of nations can all be justified by the invocation of one word: al-Qa’ida.

“In our approach to counterterrorism,” said the White House, “we will continue to be guided by the President’s affirmation in the National Security Strategy that he bears no greater responsibility than ensuring the safety and security of the American people.
“Consistent with the National Strategy for Counterterrorism, we will concentrate our efforts on disrupting, dismantling, and eventually defeating al-Qa’ida and its affiliates and adherents in Africa to ensure the security of our citizens and our partners. In doing so, we will seek to strengthen the capacity of civilian bodies to provide security for their citizens and counter violent extremism through more effective governance, development, and law enforcement efforts.”

And there you have it. Ultimately, “good governance” and the rest of Obama’s wish-list for Africa is whatever suits U.S. war on terror priorities – and keeps out the Chinese. Which only confirms that Barack Obama is, indeed, an imperialist son-of-a…um, Kenyan.

The archetype of the phony, pro-war "progressive"

The Empire Holds Its War Council in Chicago

The Libyan Soldiers: The True Heroes of NATO’s War