"The world under a microscope"


A G-20 en route to balkanization

The meetings have been coming at high speed for world leaders. After the NATO summit and the G8 in Chicago and just before the Earth Summit in Rio, then the EU summit in Brussels in late June, Alfredo Jalife analyses the G20 meeting that took place in Mexico on 18-19 June. According to him, 2012 is a transition year and the contradictions within this world economic government are too great for it to make any momentous decisions. He invites us instead to turn our attention to the bilateral meetings that were being held in the shadow of the Mexican pyramids. 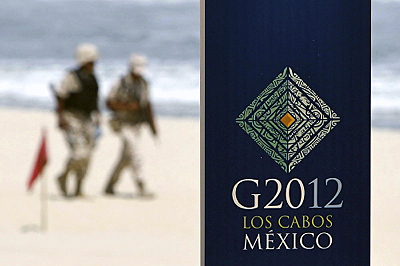 We had the electoral agendas of the U.S. and China colliding with the crisis of the Euro zone, spreading infection to the heart of the G20 meeting in Los Cabos.

Obama, whose reelection is uncertain, was paralyzed and could not make strong decisions at the G20, which suffered from chronic acephaly, especially as the host itself, Mexico, no longer commands the initiative, neither locally nor regionally or globally.

For incumbent President Hu Jintao, the summit was only a formality, and it will be his designated successor Xi Jinping who will adopt the relevant decisions at the G-20 next year in Moscow. It is not China that will save the United States nor Europe from their serious financial crisis. Of the three superpowers, the only one who arrived in Los Cabos with both hands free was the President of Russia, Vlady Putin.

France has defined its new direction with the socialist François Hollande and his attractive new slogan, "growth without austerity", while Chancellor Angela Merkel is trying, against all odds, to maintain fiscal discipline and austerity, from which even President Obama has strayed.

The G-20 is a motley grouping of the world’s top 20 GDPs, with two glaring exceptions, Spain and Iran; the idea being, from an economist perspective, to combine the G-7, in decline, and crippled with debts, with the BRIC countries’ high savings and low debt. In geopolitical terms, the G-20 would be a fractured "G-12" (G-7 + the five BRICS) plus their peripheral allies. Only three Latin American countries are included in the group: Brazil, Mexico (the host country) and Argentina.

The violently hostile position of Mexican President Calderon – who apparently wished to become the head of the predatory Spanish oil company, Repsol - to the nationalization by Argentina of that company, highlighted his country’s subservience to the U.S., in unison with his avowed antagonism towards BRICS. The shadow of fractures pursues Calderon at all levels.

The anatomy of the G-20 reveals several other fractures: between the G-7 and the BRICS, whose interests collide in Syria and Iran; between South America (Argentina and Brazil) and Mexico’s Calderon, docile towards Spain and the USA.

Western media were quite skeptical about the results of this summit, whose agenda was disrupted by the crisis in Europe, Angela Merkel finding herself under the combined pressure of the USA, Great Britain, and the new socialist presidency of France. This crisis is not without importance for the rest of the world, but is nonetheless a subject relevant to the Eurocentrism of one or the other; and now everyone knows the Greek verdict on the dra(ch)ma of its destiny

There is no cohesion in the euro zone, and Angela Merkel criticized the French economic line in an unusual verbal clash with François Hollande [1]. The French government has denied the creation of a common front with Italy and Spain against Germany, but what has supremely annoyed Angela Merkel is the French president’s meeting with the German opposition center-left, relatively tempted by the "growth without austerity" project.

China has been alerted to the possibility of Greece’s leaving the euro zone [2]. The G-20 finds itself in a catatonic state, in the best case, or the worst, rushed into fatalistic balkanization.

The Xinhua agency (15/6/12) had revealed that Putin had planned to meet Obama: it was the first meeting since Putin’s return to the Kremlin last month, and "it is likely to involve the signing of important agreements. "

Indeed, The Economist (16/6/12), which suffers from Putinophobia and is the spokesman for the neoliberal globalists, hasn’t stopped ranting against this meeting. One would think they would like a world war, ostensibly to clean up their finances. This meeting was the highlight of the summit. Despite the severe collision between U.S. and Russia on the Syrian internal conflict, the Iranian nuclear dispute and the deployment of an alleged "missile defense" to Russia’s borders, it is not unlikely that both countries are in the process of delineating their respective spheres of influence in the broader Middle East.

Today we see NATO (which includes the G-7 except Japan) and the Shanghai group struggle to define their new Near Eastern borders.

Germany is on the defensive in the face of U.S. pressure, and according to Xinhua, wanting the summit to "go beyond the question of the European debt, and consider the problem of recovery and economic growth on a global scale, which means to remedy the "dismal status of U.S. finances”. The U.S. is trying to impose the theme of the European crisis, perhaps to avoid being publicly shamed for not implementing the comprehensive global financial reform that Russia defends, and which had been decided at the previous summit in Cannes.

The president of Brazil, Deilma Rousseff, warned that "the world should not expect emerging economies alone to solve the problem of the global crisis". Will she convince Calderon?

One of the architects of the "model G-20", the former British Prime Minister Gordon Brown argued that "the European crisis is not the crisis of one, it is the crisis of all" [3] and he added that if the G-20 fails to coordinate a concerted global action plan soon, "we are facing a global slowdown, which will impact the U.S. presidential elections, and the transition to a global leadership role for China". In conclusion, he said: "this is the last chance."

Certainly, a global crisis will hurt Obama, but it seems exagerrated to mention China in this context, unless the perfidious Albion has a wild card up her sleeve. Gordon Brown felt the members of the G-20 should not "leave Mexico without agreeing to support a major project for rescuing Europe, to stop the contagion."

The drama of his statements reflects the fact that the situation is difficult for Britain, because in his deconstructive semiotics, "rescue" of the world economy probably means that of Great Britain, simply.

Indeed, David Cameron has a severe infection, due to his obscene links with the pestilential oligarch Murdoch, and he is so shaken that he recently forgot his eight year old girl in a pub.

Thus the insolvent Anglosphere is dramatizing the situation. James Haley, manager of the global economy program of CIGI (a Canadian think tank) adds that the short-term challenges of the G-20 are immense, and that to "preserve the system of international trade and payments of the last 65 years" is a must. Is the situation really so tragic?

The time and place for the G-20 meeting couldn’t have been worse: the day after the Greek elections, with acatatonic Obama, and a powerless host country. What decisions can be taken with this level of fracturing within the G-20?

China Daily (06/16/12) sized up the summit in the following terms: "it is necessary to extinguish the flames of the global economy." The problem is that some in the G-20 are more firebugs (you know whom) than firemen.