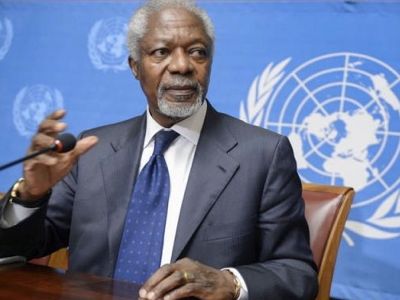 2. Action Group members came together out of grave alarm at the situation in Syria. They strongly condemn the continued and escalating killing, destruction and human rights abuses. They are deeply concerned at the failure to protect civilians, the intensification of the violence, the potential for even deeper conflict in the country, and the regional dimensions of the problem. The unacceptable nature and magnitude of the crisis demands a common position and joint international action.

3. Action Group members are committed to the sovereignty, independence, national unity and territorial integrity of Syria. They are determined to work urgently and intensively to bring about an end to the violence and human rights abuses and the launch of a Syrian-led political process leading to a transition that meets the legitimate aspirations of the Syrian people and enables them independently and democratically to determine their own future.

4. To secure these common objectives, the Action Group members (i) identified steps and measures by the parties to secure full implementation of the six-point plan and Security Council resolutions 2042 and 2043, including an immediate cessation of violence in all its forms; (ii) agreed on guidelines and principles for a political transition that meets the legitimate aspirations of the Syrian people; and (iii) agreed on actions they would take to implement the above in support of the Joint Special Envoy’s efforts to facilitate a Syrian-led political process. They are convinced that this can encourage and support progress on the ground and will help to facilitate and support a Syrian-led transition.

Identified steps and measures by the parties to secure full implementation of the six-point plan and Security Council resolutions 2042 and 2043, including an immediate cessation of violence in all its forms

5. The parties must fully implement the six-point plan and Security Council resolutions 2042 and 2043. To this end:

• All parties must re-commit to a sustained cessation of armed violence in all its forms and implementation of the six-point plan immediately and without waiting for the actions of others. The government and armed opposition groups must cooperate with UNSMIS with a view to furthering the implementation of the above in accordance with its mandate.

• A cessation of armed violence must be sustained with immediate, credible and visible actions by the Government of Syria to implement the other items of the six-point plan including:

- Intensification of the pace and scale of release of arbitrarily detained persons, including especially vulnerable categories of persons, and persons involved in peaceful political activities; provision without delay through appropriate channels of a list of all places in which such persons are being detained; the immediate organization of access to such locations; and the provision through appropriate channels of prompt responses to all written requests for information, access or release regarding such persons;

- Ensuring freedom of movement throughout the country for journalists and a non-discriminatory visa policy for them;

- Respecting freedom of association and the right to demonstrate peacefully as legally guaranteed.

• In all circumstances, all parties must show full respect for UNSMIS’ safety and security and fully cooperate with and facilitate the Mission in all respects.

• In all circumstances, the Government must allow immediate and full humanitarian access to humanitarian organizations to all areas affected by the fighting. The Government and all parties must enable the evacuation of the wounded, and all civilians who wish to leave to do so. All parties must fully adhere to their obligations under international law, including in relation to the protection of civilians.

Agreed Principles and Guide-lines for a Syrian-led transition

6. Action Group members agreed on the following ‘Principles and Guide-lines on a Syrian-led transition’:

Any political settlement must deliver to the people of Syria a transition that:

• Offers a perspective for the future that can be shared by all in Syria;

• Establishes clear steps according to a firm time-table towards the realization of that perspective;

• Can be implemented in a climate of safety for all, stability and calm;

• Is reached rapidly without further bloodshed and violence and is credible.

I. Perspective for the Future

The aspirations of the people of Syria have been clearly expressed by the wide range of Syrians consulted. There is an overwhelming wish for a state that:

• Is genuinely democratic and pluralistic, giving space to established and newly emerging political actors to compete fairly and equally in elections. This also means that the commitment to multi-party democracy must be a lasting one, going beyond an initial round of elections.

• Complies with international standards on human rights, the independence of the judiciary, accountability of those in government and the rule of law. It is not enough just to enunciate such a commitment. There must be mechanisms available to the people to ensure that these

commitments are kept by those in authority.

• Offers equal opportunities and chances for all. There is no room for sectarianism or discrimination on ethnic, religious, linguistic or any other grounds. Numerically smaller communities must be assured that their rights will be respected.

II. Clear Steps in the Transition

The conflict in Syria will only end when all sides are assured that there is a peaceful way towards a common future for all in Syria. It is therefore essential that any settlement provides for clear and irreversible steps in the transition according to a fixed time frame. The key steps in any transition include:

• It is for the Syrian people to determine the future of the country. All groups and segments of society in Syria must be enabled to participate in a National Dialogue process. That process must not only be inclusive, it must also be meaningful—that is to say, its key outcomes must be implemented.

• On this basis, there can be a review of the constitutional order and the legal system. The result of constitutional drafting would be subject to popular approval.

• Once the new constitutional order is established, it is necessary to prepare for and conduct free and fair multi-party elections for the new institutions and offices that have been established.

• Women must be fully represented in all aspects of the transition.

Any transition involves change. However, it is essential to ensure that the transition can be implemented in a way that assures the safety of all in an atmosphere of stability and calm. This requires:

• Consolidation of full calm and stability. All parties must cooperate with the transitional governing body in ensuring the permanent cessation of violence. This includes completion of withdrawals and addressing the issue of the disarming, demobilization and reintegration of armed groups.

• Effective steps to ensure that vulnerable groups are protected and immediate action is taken to address humanitarian issues in areas of need. It is also necessary to ensure that the release of the detained is completed rapidly.

• Continuity of governmental institutions and qualified staff. The public services must be preserved or restored. This includes the military forces and security services. However, all governmental institutions, including the intelligence services, have to perform according to human rights and professional standards and operate under a top leadership that inspires public confidence, under the control of the transitional governing body.

IV. Rapid steps to come to a Credible Political Agreement

It is for the people of Syria to come to a political agreement, but time is running out. It is clear that:

• The sovereignty, independence, unity and territorial integrity of Syria must be respected.

• The conflict must be resolved through peaceful dialogue and negotiation alone. Conditions conducive to a political settlement must now be put in place.

• There must be an end to bloodshed. All parties must re-commit themselves credibly to the six-point plan. This must include a cessation of armed violence in all its forms and immediate, credible and visible actions to implement items 2-6 of the six-point plan.

• All parties must now engage genuinely with the Joint Special Envoy. The parties must be prepared to put forward effective interlocutors to work expeditiously towards a Syrian-led settlement that meets the legitimate aspirations of the people. The process must be fully inclusive to ensure that the views of all segments of Syrian society are heard in shaping the political settlement for the transition. The organized international community, including the members of the Action Group stands ready to offer significant support for the implementation of an agreement reached by the parties. This may include an international assistance presence under a United Nations Mandate if requested. Significant funds will be available to support reconstruction and rehabilitation.

7. Action Group members will engage as appropriate, and apply joint and sustained pressure on, the parties in Syria to take the steps and measures outlined in paragraph 5.

8. Action Group members are opposed to any further militarization of the conflict.

9. Action Group members underscore to the Government of Syria the importance of the appointment of an effective empowered interlocutor, when requested by the Joint Special Envoy to do so, to work on the basis of the six-point plan and this communiqué.

10. Action Group members urge the opposition to increase cohesion and be in a position to ensure effective representative interlocutors to work on the basis of the sixpoint plan and this communiqué.

11. Action Group members will give full support to the Joint Special Envoy and his team as they immediately engage the Government and opposition, and consult widely with Syrian society, as well as other international actors, to further develop the way forward.