Thierry Meyssan on aggression against Syria and François Hollande’s diplomacy

In an interview with Voice of Russia Radio, which we reproduce in our columns, Thierry Meyssan discusses the recent developments in the ongoing operation to destabilize Syria and the new French president’s narrow-minded and near-sighted stance. 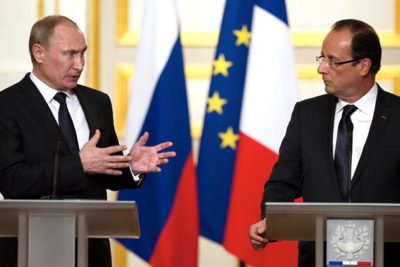 Voice of Russia: Mr. Meyssan, thanks for begin with us on Voice of Russia. You are at the heart of Near East news. You see things evolve on a day-by-day basis and you can witness the situation in Damascus. What is your opinion on the implementation of the Kofi Annan plan who, according to you, borrowed in large part from the initiative of Serge Lavrov, chief of the Russian Quai d’Orsay?

Thierry Meyssan: The Kofi Annan plan is a retake of the Lavrov plan. They just modified one clause concerning the status of the press. And this was a handy approach since Mr Lavrov had succeeded in establishing a mutual agreement with the Arab League, which seemed to be a suitable basis for discussion. However, at the same instant M. Lavrov had negotiated this with the Arab League, the Qatari representative, who was the president of the League at the time, gave a press conference making statements which totally contradicted the spirit of the plan as well as Lavrov’s own statements to the press a few minutes earlier. And today we are still in the same situation, which is to say that everyone refers to the Lavrov plan, now the Annan plan, but certain parties to the conflict leave no doubt as to their refusal to put it into practice. Because this idea, the peace plan, is founded on the principle that everyone must cease fire unilaterally, and not wait for the others to take the first step and deescalate progressively. Everyone must stop shooting. The Syrian Army has made considerable efforts; it has withdrawn from large cities in the midst of people’s protestations and demonstrations – not against the army but for the army; people want military protection from the mercenary groups. And, in response there is no stopping at all, the commando actions continue. There are many targeted actions either to destroy infrastructure, or to assassinate local leaders or persons who have demonstrated their support for the country.

VOR: In your opinion, is there even the slightest chance for the pacification of Syria?

TM: Yes! It is quite simple! If arms and money stopped arriving from abroad…If they stopped sending mercenaries…There are constantly mercenaries crossing the border from Turkey, as the Russian representative on the Security Council has pointed out. Combatants who were in Libya were transferred to Turkey using UN structures. They have set up a camp for supposed refugees, which is in fact a rear base for the so-called Free Syrian Army. And constantly these people cross the border to commit crimes on Syrian territory. So, if outside support for armed gangs were to stop, there would be nothing left! After that, we would have a normal situation with a government that has the support of the majority, an opposition that exists, that has the means to express itself, that does its opposition work, that proposes new things, etc. There would be a democratic debate as exists in many countries. Now, when the contact group initiated by Russia meets, the question is will the US, which is the power holder for the West and for the Gulf Cooperation Council, ask their allies to stop this under-handed play? Or will they on the contrary continue to encourage them to throw oil on the fire?

VOR: One more question, this one more sensitive. The supposed Free Syrian Army supported by Turkey and the West savagely assassinated several of your colleagues, journalists from a local TV station. Do you believe that the press is being attacked to create a media blockade, to deprive Western and Arab citizens of truthful information? What are the motives of these criminals?

TM: I think there are two elements working together. On the one hand we have seen the same scenes repeated successively in Yugoslavia, in Afghanistan, in Iraq, in Libya and now in Syria. There are powers that systematically destroy the media of the countries they are attacking. And it is simple. NATO and the US are constantly behind this. No one else behaves in this way in the world. There is no greater enemy to freedom of expression than the US and NATO. Whatever the spin, the verifiable facts show this.

Secondly, particular to the present case, an immense campaign was planned to disconnect Syrian channels from satellites and replace them with bogus CIA channels using the satellite networks they have created over the last months. The idea was to broadcast fictional images prepared in studios to simulate the crumbling of the Syrian State so that the people of Syria would open their TVs and, instead of seeing their normal channel, they would have seen something else with false images. And they would have thought – Look! It’s too late! We have to quit, the game is lost, we are occupied by foreign forces. Well, that was not possible because there was first an incredible mobilization throughout the entire world. Dozens of very large newspapers devoted entire pages to this story. Hundreds of websites have conveyed the details of this operation. Finally MilSat refused to remove the Syrian channels from its satellite. The Arab League was forced to retreat with ArabSat. The Syrians have installed their TV on new satellites... Finally they went to the Security Council with a very important letter on this subject. And above all, Mr Lavrov placed the immediate halt of the information war against Syria at the top of the agenda of the Contact Group meeting.

So NATO took its revenge in this manner. They sent commandos. This TV station was installed ten miles out of Damascus, in the countryside, actually. It was not at all defended. The commandos arrived - people with night vision systems, with everything you need. They killed the guards. There were just four guards. They entered. They arrested three TV anchors, tied them down and executed them on the spot. And then after that they set the place on fire and blew everything up. Now there is only rubble. There is just one building that still stands.

Again, this is not new. The U.S. and NATO have done this everywhere for 20 years. It is incredible. They are the same people who practice these barbaric acts and in international organizations present themselves as defenders of free speech! It’s the world upside down! Reality tells us the opposite of their words! And for us journalists, this becomes impossible to endure. It is quite clear. Anyone wanting to oppose imperialism in a country that does not have significant means to defend itself is now in danger.

VOR: And what about the position of France concerning Syria? We see François Hollande tacking to the winds and swerving constantly as if he did not know where to turn ... What do you think?

TM: As you say, François Hollande zigzags and wallows. That is to say he does not know what his policy is: he tries to follow his movement. He realizes that the official position on Syria is not tenable. But at the same time he is not able to formulate another policy. He is not capable of that because he has no room to manoeuvre. He accepts that France continues, as during the tenure of Nicolas Sarkozy, to drag itself behind the United States. How could he articulate a new policy under these conditions? He has next to him the administration of the Quai d’Orsay, the French diplomats who keep telling him that we are making a serious mistake with Syria, that France and Syria should be allies as was the case in the past. France was the mandatory power in the inter-war period here. There is an inability to adapt.

This inability expressed itself clearly at the first meeting between François Hollande and Vladimir Putin at the Elysée Palace. It was something a little grotesque in fact! The two Heads of State had made a list of topics to be covered including Syria, which occupied much of the discussion. And they found no point of agreement. It is shameful! No point of agreement! Why? Because on each topic Vladimir Putin voiced the demands of Russia, substantiating each one. We want this because of that ... giving his arguments. And there, opposite him, was François Hollande who replied: "We think that..." With no arguments! In other words, there is nothing to negotiate. It’s just the clash of a narrow-minded point of view faced with an open position.

And when they specifically addressed the Syrian issue, it became even more ridiculous! In response to the French President raising the spectre of sixteen thousand killed by the Syrian government etc., President Putin asked, "But where did you get these figures? From the Syrian Observatory of Human Rights? But we sent our ambassador to London. He saw these people: a merchant with a small kebab booth. That’s the source of French intelligence? Russia meanwhile, we have one hundred thousand Russians who are deployed throughout Syrian territory! Nothing escapes us! We can check everything! And we can say obviously that this London kebab seller’s story has no value! "