The Pentagon has come up with a show that has been scoring NBC’s highest ratings. Combining the principle of a reality show that puts reality on display, with that of a television game that simulates a situation to test the competitors’s reactions, the TV series treats the audience to real-life war games. This propaganda show, unparalleled since the sports competition in battle dress staged by Joseph Goebbels, aims to both enhance martial attitudes and obscure the cruelty of war. 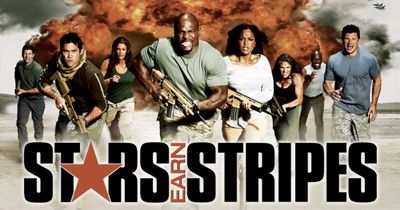 The commandos throw themselves into the sea from a helicopter and come to shore on a raft, wipe out the enemies with their assault rifles, discover an arms depot and blow up the weapons as they fly away clinging to the helicopter. Performing this assault are not Marines or Navy Seals, but well-known actors, singers, sportsmen and businessmen. Recruited by U.S. network NBC for the reality show "Stars Earn Stripes," they are trained and accompanied by real action commandos, including the Green Berets.

The aim of the reality show, says NBC, is to pay homage to "our heroes" who return from war, showing "what incredible missions they undertake in real time." Each competitor competes for a cash prize, which is donated to a military charity, prompting viewers to contribute from their own pockets.

But what makes the reality show unique is the exceptional master of ceremonies: General Wesley Clark, former Supreme Allied Commander in Europe in 1997-2000. It is he who plans the competitors’ missions, guides them and judges them. He doesn’t lack experience: it was he who planned and directed the war against Yugoslavia.

Since he retired, Clark has written books and taught courses on how to "wage and win modern warfare," based on the 1999 war in Yugoslavia. It was the first war NATO carried out in its 50-year history, Clark says, to "put an end to Milosevic’s ethnic cleansing of Kosovo Albanians." A war in which "America provided the leadership and chose the targets to hit." But the Pentagon made it "NATO’s war," involving allies who performed 60 percent of the air strikes. [1]

Thus Wesley Clark describes the agenda for another reality show, one far more important than NBC’s, one which the Pentagon puts on the waves in Mondovisione to make falsehoods appear real, disguising the causes and aims of the war.

It does this by following two rules: focus public attention on the number one enemy of the moment (Milosevic, Bin Laden, Saddam Hussein, Gaddafi, Assad, Ahmadinejad), showing how dangerous he must be and how just and urgent military intervention would be; involving allies, but ensuring that the U.S. always maintains its leadership.

In the reality show of war, it is permissible to fabricate "evidence" against enemies. For example, those presented at the United Nations by U.S. Secretary of State Colin Powell on Feb. 5, 2003, to prove that Iraq had biological weapons of mass destruction. Powell later frankly admitted that this "evidence" was false, as he asked the CIA and the Pentagon to explain why they had provided "inaccurate information."

But now the reality show of war has moved on to new episodes: now Iran is accused of wanting to make nuclear weapons (ignoring the fact that Israel has had them for decades, holding them pointed at Iran and other countries). Popular broadcasts such as "Stars Earn Stars" contributed to feeding the concept of ​​the enemy and the need to defend yourself against that enemy.

Wesley Clark was able to broadcast this in Italy, with the help of an exceptional crony: Massimo D’Alema, who in 1999, when he was prime minister, put the air bases and the Italian armed forces under the command of the future host of the reality show, "Stars Earn Stripes."

[1] Translator’s note: In 78 days of bombing, the NATO strikes led by General Wesley Clark killed more than 3,000 overwhelmingly civilian Yugoslavs and destroyed much of Serbia’s infrastructure.