The massacre of 34 miners at Marikana lays bare the central contradiction of the South African “arrangement.” Back in 1994, “the ‘revolution’ was put on indefinite hold, so that a new Black capitalist class could be created, largely from the ranks of well-connected members of the ruling party and even union leaders.” The regime now represses Black workers on behalf of capital. 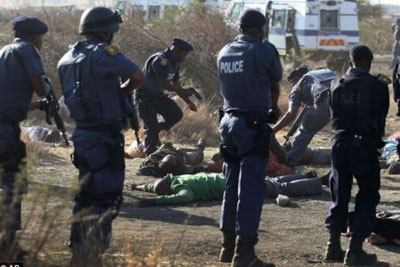 When thousands of miners went on strike at South Africa’s largest platinum mine, in Marikana, they were confronting not only the London-based owners, but the South African state, which since 1994 has been dominated by the African National Congress (ANC); COSATU, the Congress of South African Trade Unions; and the South African Communist Party. This week, the full weight of the state was brought down on the Black miners, 34 of whom were massacred by police gunfire. Many of the survivors face charges of murder in the earlier deaths of two policemen and eight other miners.

The National Union of Mineworkers, whose representation the strikers rejected, and the Communist Party head in the region claim the strikers are at fault, that they have committed the sin of choosing an alternative union to argue their case for higher wages and, therefore, deserve severe punishment. They are “anarchists,” say these two allies of the South African state, and guilty of fomenting “dual unionism” – which is now, apparently, a capital crime. With a straight face, the Communist Party had the gall to call on all South African workers to “remain united in the fight against exploitation under capitalism.”

That is precisely what the Marikana miners were doing – the struggle they gave their lives for. However, since the peaceful transition to state power to the ANC and its very junior partners, the COSATU unions and the Communist Party, in 1994, the South African state has had different priorities. The “revolution” was put on indefinite hold, so that a new Black capitalist class could be created, largely from the ranks of well-connected members of the ruling party and even union leaders. It is only logical that, if the priority of the state is to nurture Black capitalists, then it must maintain and defend capitalism. This is the central contradiction of the South African arrangement, and the massacre at Marikana is its inevitable result.

The 1994 agreement between Nelson Mandela’s ANC and the white South African regime was a pact with the devil, which could only be tolerated by the masses of the country’s poor because it was seen as averting a bloodbath, and because it was assumed to be temporary. But, 18 years later, the arrangement has calcified into a bizarre protectorate for foreign white capital and the small class of Blacks that have attached themselves to the global rich. Apologists for the African National Congress regime will prattle on about the “complexity” of the issue, but the central truth is that South Africa did not complete its revolution.

The fundamental contradictions of the rule of the many by the few, remain in place – only now, another layer of repression has been added: a Black aristocracy that has soaked itself in the blood of the miners of Marikana.

South Africa remains the continent’s best hope for a fundamental break with colonialism in its new forms. But, as in all anti-colonial struggles, the biggest casualties will occur in the clash between those who truly desire liberation, and those who are intent on an accommodation with the old master.

The archetype of the phony, pro-war "progressive"

The Empire Holds Its War Council in Chicago

The Libyan Soldiers: The True Heroes of NATO’s War