The Western press is saluting the audacity of Lakhdar Brahimi for having picked up the gauntlet by accepting to replace Kofi Annan as Special Representative of the Secretary Generals of both the United Nations and the Arab League in Syria. However, according to Thierry Meyssan, the truth of the matter is starkly different. Given the current failure of outright regime change in Damascus, this NATO confidence man has been entrusted with the task of unleashing all-out civil war in Syria. 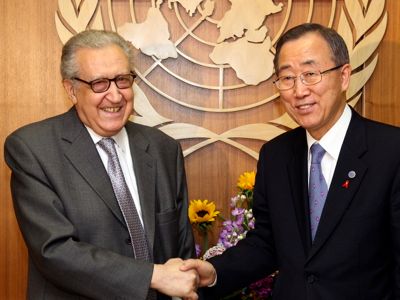 In the aftermath of the second Russian-Chinese veto which formally prohibited foreign intervention in Syria on February 4, the West feigned seeking peace while actively organizing a vast secret war. On the diplomatic front, they appeared to accept the Lavrov-Annan Plan, even as these same countries were facilitating the movement into Syria of tens of thousands of mercenaries and while UN Observers were escorting the leaders of the Free Syrian Army to get them through the roadblocks.

The July 18th attack that decapitated the Syrian military command was intended to open the gates of Damascus for these Contras as part of the West’s pursuit of "regime change." This did not happen. Given the failure of these forces on the ground, and in open contempt of the third Russian-Chinese veto, the Western allies took things to the next level. Not being able to accomplish "regime change", the strategic choice is to sew chaos. They therefore sabotaged the Lavrov-Annan Plan and proclaimed their intention to assassinate President Bashar al-Assad. The speeches of Obama and Hollande, both of which delivered sharp ultimatums on Assad’s hypothetical first-use of chemical weapons (in ways flagrantly reminiscent of the Bush Administration’s lies about Iraq) confirm that all forms of war are in play.

The latest operation commenced with organized leaks by the press. Reuters [1], NBC [2], Le Parisien [3], Le Canard Enchaîné [4], The Sunday Times [5], and Bild am Sonntag [6] revealed that Barack Obama had authorized covert military intervention months before and that the U.S., Turkey, France, Britain and Germany were acting in concert. The press announced that the secret war had been coordinated from headquarters established at the NATO base in Incirlik, Turkey.

When the U.S. presidential order was revealed, Kofi Annan resigned from his mission. By his account, it would be futile to demand a ceasefire at the Security Council when the leading Council members were openly identifying themselves as belligerents. The Special Envoy of the U.N. and the Arab League clearly stated that it would be impossible for anyone henceforth to proceed with a peace mission given that the mission itself was illusory because of what he euphemistically termed the "disunity" within the Security Council. [7]

Despite his statement, the Western nations turned again to the Secretary Generals of both the U.N. and the Arab League to provide a veneer of pacific intentions and legality to their imperial ambitions. They designated a new Special Joint Envoy in the person of Lakhdar Brahimi. In the communiqué announcing the nomination, Ban Ki-Moon did not define the new mission as intended to fulfill the Lavrov-Annan plan previously approved by the Security Council. Instead, he signalled that the nominee would employ "his talent and extraordinary experience" to lead Syria toward a "political transition in accordance with the legitimate aspirations of the Syrian people." [8]

To comprehend what is currently underway requires a closer look at the "the talents and experience" of Mr. Brahimi. Son of a collaborator during the WWII occupation of France and not of a hero of the Algerian Independence with the same name as he would have people believe, Lahkdar Brahimi is one of the leading sycophant acolytes of the doctrine "humanitarian intervention", the new scarcely-veiled substitute for neocolonialism. His name is still attached to the report of the Commission for U.N. Peacekeeping Operations, which he had chaired. He never questioned the legal aberration that allowed the U.N. to create so-called peacekeeping forces in order to impose political solutions against the will of the warring parties rather than overseeing the implementation of peace accords concluded equitably by them. Instead, he has been an active advocate for further consolidating the world governance role of the United Nations on the basis of a doctrine of intervention and the creation of a supranational intelligence service. [9] This was the origin of the "decision support service." Not long after, and without informing the Security Council, Ban Ki-moon signed on September 23, 2008 a protocol with his NATO counterpart linking this newly-created service to the Atlantic Alliance. [10] So much for Brahimi’s "talents".

As for Mr. Brahimi’s "experience", in the late 1980’s he masterminded the Lebanese Confessional System (the Taif Accord ) and, following the U.S. invasion of Afghanistan, the Bonn Agreement with put in place the present-day Afghan narco-regime. He also participated in the machinations to "remodel" after the Western invasion of 2003 which sought to partition the country into three districts, one of which a Sunni section where the Hashemite monarchy would be restored. Mixing business with pleasure, he married off his daughter Rym, a CNN journalist, to Prince Ali. Had Ali become king, she would have become the nominal queen of Iraq.

And this is not all. His official biographies neglect to mention that Lakhdar Brahimi, as a "paragon of democracy", was one of the ten members of the High Security Council who perpetrated the coup d’etat in Algiers in January 11, 1992, nullifying the legislative election results, forcing President Chadli Bendjedid to resign and installing the putchist generals [11] in power. [12] What followed was a civil war—precisely along the model that Washington now hopes to engender in Syria—where both sides are simultaneously manipulated by the U.S. In Algeria, the Islamist leader, Abbassi Madani, now a refugee in Qatar, took as his political advisor the pseudo-secularist Burhan Ghalioun, none other than the future president of the Syrian National Council. The armed Islamist faction, the GSPC [13], renamed in 2007 Al Qaeda in the Islamic Mahghreb (AQIM), was engaged in arms training with the Libyan Islamic Fighting Group, rebranded in 1997 as Al Qaeda in Libya. The majority of the combatants in the two groups have now integrated into the Free Syrian Army.

In these circumstances French Foreign Minister Laurent Fabius travelled to inspect the rear-area support bases proliferating in the states bordering Syria. Passing through Jordan, he asserted, "I am conscious of the weight of what I am about to say; Bashar Al-Assad does not deserve to be on Earth." [14] Without having to give a thumbs down, Emperor Fabius has clearly moved from "Bashar must go" to "Bashar must die!"

The Western nation-states have just one message for Moscow and Bejing. They will not fall back; rather they are determined to press on by any and all means.

[11] Editor’s note: Dubbed "janviéristes" in France with reference to the January coup d’état.

[12] Islam and democracy: the failure of dialogue in Algeria, by Frédéric Volpi, Pluto Press, 2003 (p. 55 and following pages).

[13] French acronym for Salafist Group for Call and Combat