In U.S. war films, the American soldier fighting in a strange land befriends a local child, creating a personal bond of humanity, while busily killing scores of the kid’s adult countrymen. American corporate media perform much the same sick exercise, identifying children among the “worthy victims” of the other side in U.S. foreign wars. Children deemed unworthy of American sympathy are left to the tender mercies of drones.

Malala Yousufzai is a Pakistani teenager who publicly campaigned for the right of young girls to be educated in her country. A resident of the town of Mingora in the Swat valley, she began her efforts at the age of 11, and gave a human face to the terrors inflicted by the Taliban on the civilian population. When she was shot in the head by a member of the Taliban, Miss Yousufzai became an international celebrity. She has been lauded, and rightly so, for taking such a principled and risky stance. She is not the only victim of violence and terror in Pakistan, but she has become the latest of the worthy victims that we hear so much about [1].

The propaganda created by our corporate media tells us that some victims of tragedy are worthy of our consideration and concern, while others are not. The worthy victim is a person who advances the interests of the powerful or the elites. The unworthy victim makes unwanted demands on the powerful and is crushed, or brings to light things which those at the top want to keep hidden, or is just a member of a group that is out of favor.

Malala is the worthy victim du jour among a sea of unworthy victims created by our government. According to a recent study American drones have killed between 2,562 and 3,325 people in Pakistan. Between 474 and 881 of those killed were civilians, and 176 were children [2]. These numbers are estimates because the drone program is shrouded in official secrecy. But it is clear that our government is responsible for bringing terror to a civilian population, a war crime by any definition.

The corporate media that have given Malala Yousufzai so much attention give none to the nameless victims of American terror. These drone attack victims in Pakistan have been deemed unworthy with no right to be mentioned or spoken of for the simple reason that our government killed them.

The picking and choosing of victims and determining worth is all the more ironic because it is the United States which brought Taliban terror to Pakistan and Malala in the first place. Cold war competition with the Soviet Union brought the Taliban under United States protection and patronage. Malala’s shooting was blowback, one of many tragic examples of that phenomenon which is the direct result of the United States insisting on having its way with the world [3]. The United States has produced jihadi terrorists who carried out the attacks on September 11, 2001 in New York and Washington and on September 11, 2012 in Benghazi, Libya. Malala is just the latest example of the hapless individual who ended up suffering at the hands of a government which allegedly wanted to help them.

Most Americans know little or nothing about the drone terror inflicted on Pakistani men, women and children. If they were better informed it still might not make much of a difference in their opinions. They believe that their government has the right to do whatever it wants, particularly to brown skinned people living in far away places.

If Malala Yousufzai had been maimed by an American drone attack, the media would probably not have reported on it at all. If by some miracle they had done so, they would have simultaneously deferred to White House or Defense Department spokespersons who either minimize or deny the suffering created by this country’s actions.

Next week the presidential candidates will debate on foreign policy. The word debate is used loosely of course, but the duopoly conversation will only affirm that the slaughter of innocent people in Pakistan and Afghanistan will continue no matter who is elected president. Each president assaults the rules of law a little more than his predecessor.

George W. Bush claimed a legal right to declare anyone an “enemy combatant” who could be held without charge or trial. Barack Obama has gone further, claiming not only a right to detain indefinitely, but also a right to act as judge, jury and executioner and assassinate anyone he wants. 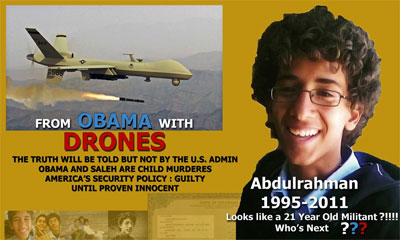 If Americans and others in the West want to be outraged about official violence used against teens, they should be outraged about the death of an American teenager in Yemen. In October 2011, sixteen year-old Abdulrahman al-Awlaki was killed by a drone in Yemen, just days after his father Anwar al-Awlaki was dispatched in the same manner. Both father and son were American citizens and neither was ever charged with a crime, but both are dead because the president ordered them killed and neither media pundits nor celebrities bemoan that fact. They are deemed unworthy of sympathy or attention because they were on the “Kill List” which the White House bragged about putting into place [4].

Hopefully Malala Yousufzai will recover and she and her counterparts will be able to exercise their right to be educated without fear of violence. Hopefully there will also come a day when the United States stops killing Pakistani girls and boys and men and women. Until then, the least the rest of us can do is make them worthy of our concern.

[2] "Living Under Drones," a study by law professors at Stanford and New York Universities, is based on public data and interviews with civilians, witnesses and survivors of drone attacks in north-west Pakistan; livingunderdrones.org

Manufacturing "Failed States"
Made by the USA