Using the same pattern as in each recent war, the United States formed a broad coalition to attack Syria. Bypassing the individual objectives of its allies, Washington has put forward a consensual discourse acceptable to all. But as the war dragged on, the initial plans have been replaced by others. Washington has revealed its cards and its allies are forced to go along. Hillary Clinton’s latest initiative shows that for the U.S. the objective is primarily economic. 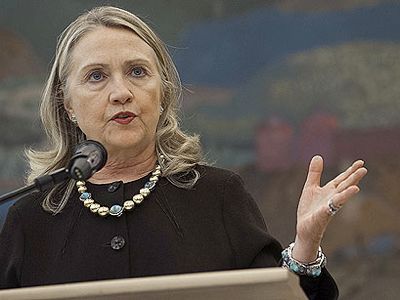 U.S. secretary of state Hillary Clinton says Washington needs “an opposition that will be on record strongly resisting the efforts by extremists to hijack the Syrian revolution,” [1] but fails to add that it must also be open to the United States doing the same.

Uprisings aimed at overthrowing governments are often divided between militants who do the heavy lifting on the ground and politicians who lead the fight in the political sphere. Outside powers scheme to anoint an acceptable politician as a leader-in-waiting to step into the void if and when the current government is toppled. The leader must be both acceptable to his or her foreign backers and to the militants on the ground.

Washington has decided that the Syrian National Council, which it “initially charged” to “galvanize opposition” [2] to Syria’s Ba’thist government is unacceptable to Syrian rebels and therefore has no hope of leading a successor government. As an alternative to the failed council, it has handpicked the leaders of a new government-in-waiting, to be unveiled in Doha on November 7, and soon after receive the pre-arranged blessing of the Arab League and Friends of Syria. Make no mistake. What emerges from Doha will be a US creation, intended to represent US interests in Syria and the Middle East.

At a press conference following an October 30 meeting with the president of Croatia, US secretary of state Hillary Clinton revealed that the Syrian National Council, Washington’s initial pick to lead the opposition to the Asad government, no longer had Washington’s support. The SNC, in Washington’s view, had become irrelevant. The armed opposition to the Asad government is happening outside the leadership of the SNC, an organization of exiles with no legitimacy within Syria and internally divided by incessant squabbling between its Islamist and secularist factions. The SNC, commented one armed rebel, “has been over with for a long time now; fighters only talk about it sarcastically.” [3]

Equally problematic for Washington was the SNC’s narrow base of political support. “From the beginning, the council was seen as a prime vehicle for the long-exiled Muslim Brotherhood” [4] and therefore “failed to attract significant representation from minority groups,” [5] including Alawites, Christians and Kurds. Its failure to win support from fighters on the ground, and to expand beyond a narrow sectarian base, hardly recommended it as a viable government-in-waiting. Sounding the council’s death knell, Clinton decreed “that the SNC can no longer be viewed as the visible leader of the opposition.” [6]

For weeks now, Robert Ford, the former US ambassador to Syria, has been putting together a plan to anoint a new US-approved government-in-the-wings. The initiative is known as the “Riad Seif plan” [7] named after a wealthy Damascus businessman and former Syrian parliamentarian who has long played an active role in the opposition to the Asad government. Acceptable to Washington owing to his businessman politics (as against the Ba’athist’s ideological commitment to state domination of the economy, marginalization of the private sector, and controls on foreign investment [8]), Seif has been endorsed by Washington to lead a post-Ba’athist government. It is hoped that his opposition credentials—he was jailed by the Syrian government for his activities—will put him in good stead with the rebels on the ground.

The plan calls for the creation of a “proto-parliament” comprising 50 members, 20 from the internal opposition, 15 from the SNC (i.e., the exile opposition), and 15 from various other Syrian opposition organizations. An executive body made up of 8 to 10 members—who have been endorsed by the US State department [9] — will work directly with the United States and its allies. [10] Washington and its subordinates, the Arab League and misnamed Friends of Syria, both democracy-hating clubs of plutocracies and oil monarchies, will attempt to make the body acceptable to Syrians by recognizing it as the legitimate representative of the Syrian people. 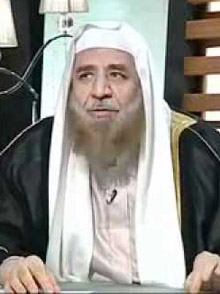 There’s no guarantee the plan will work. One of its goals is to marginalize the influence of the Jihadists, many though not all of whom have spilled into Syria from other countries, bent on overturning a secular regime led by a president whose Alawi faith they revile as heretical. If the Jihadists can be sidelined, Washington may be able to funnel arms to “acceptable” militant groups, without fear of their being used later against US targets. But there’s a question mark hanging over Seif’s appeal to religiously-inspired militants, especially when the hands of the marionette-master, the US State Department, are so visible. The same goes for the new council’s appeal to the anti-imperialist secular opposition, who “are against any new political entity that becomes subject to the agendas of foreign countries.” [11] And there’s no mistaking that the new ‘Made-in-the-USA’ council will be subject to the political agenda of the United States.

We needn’t tarry long on debunking the naive belief that Washington’s intervention in Syrian affairs has the slightest connection to promoting democracy. If democracy promotion motivated US foreign policy, absolutist monarchies with execrable records of human rights abridgements and violent repression of popular uprisings against their dictatorial rule would not make up the bulk of the United States’ Arab allies. The last thing the wealthy investors, bankers and corporate heavyweights who make up the US ruling class want is democracy, either at home or abroad. They want its polar opposite—plutocracy, rule by people of wealth in the interests of piling up more wealth through the exploitation of the labor of other people and the land, resources and markets of other countries.

When Saudi Arabia sent tanks and troops into Bahrain on March 14, 2011 to crush a local eruption of the Arab Spring, the United States did nothing to disturb their democracy-abominating ally’s assault on the popular uprising, except issue a meaningless call for “political dialogue.” As the New York Times explained, 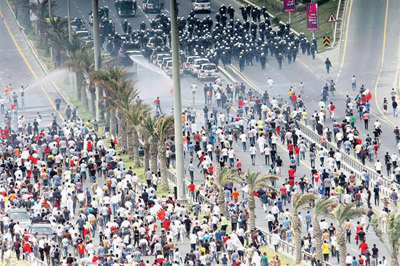 Using violence against protests in Bahrain.

The reasons for Mr. Obama’s reticence were clear: Bahrain sits off the Saudi coast, and the Saudis were never going to allow a sudden flowering of democracy next door…In addition, the United States maintains a naval base in Bahrain…crucial for maintaining the flow of oil from the region. “We realized that the possibility of anything happening in Saudi Arabia was one that couldn’t become a reality,” said William M. Daley, President Obama’s chief of staff at the time. “For the global economy, this couldn’t happen.” [12]

Considering that William Daley is an investment banker from a politically well-connected family; that “maintaining the flow of oil” means “maintaining the flow of oil revenues to US oil giants”; and that “the global economy” means “investors’ returns,” it’s clear why the plutocracy condoned their ally’s repression of the Bahrain uprising. Under plutocratic rule, steps toward democracy—even baby ones—are not allowed to get in the way of profits.

Nor need we tarry on the naive belief that a government that has been handpicked by Washington—the US State Department has “recommended names and organizations that ….should be included in any leadership structure,” disclosed Clinton [13]—will represent Syrian interests against those of its sponsor. US interests in Syria have no intrinsic relationship to protecting Israel, which—with its formidable military, yearly $3 billion dollop of US military aid, and an arsenal of 200 nuclear weapons—hardly needs further assistance defending itself against Iran, Hezbollah or Hamas, none of which are significant threats to Israel anyway but are threatened by it. Weakening Iran, Syria’s ally, may be one of Washington’s objectives in trying to orchestrate Asad’s ouster, but not because Iran may acquire nuclear power status and therefore threaten Israel (which it could hardly do anyway considering that it’s severely outclassed militarily [14]), but because, like Syria, it zealously safeguards its economic territory from the US plutocracy’s designs, allowing the state to dominate its economy and protect its domestic enterprises, land and resources from outside domination. The real reason the US plutocracy wants to topple the Syrian and Iranian governments is because they’re bad for the plutocracy’s business interests. Democracy, existential threats to Israel, and nuclear non-proliferation, have nothing to do with it.

The Syrian government is no stranger to formidable challenges. It has waged a longstanding war with Islamists who have rejected the Ba’athist’s secular orientation from the start. Its war with the ethnic-cleansing settler regime in Tel Aviv oscillates between hot and cold. The United States has waged economic warfare against Syria for years, and has connived at overthrowing its government before. Still, Damascus is in a particularly bad spot now. The world’s strongest plutocracies have escalated their hostility. Jihadist terrorists from abroad—to say nothing of home-grown ones—are doing their best to upset Ba’athist rule. But the support of the Syrian military and a substantial part of the Syrian population, plus assistance from Russia and Iran, have allowed it to hang on. 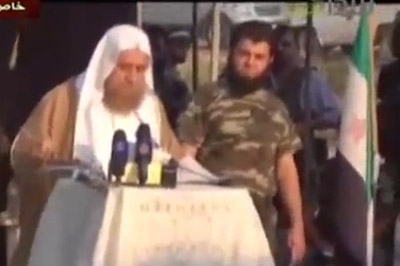 In the face of imperialist and Islamist opposition, its future looks grim, but governments have faced bleaker prospects before and survived, some even going on to thrive. To be sure, there are profound differences between the Assad government and the early Bolshevik regime, but the Syrian government and its supporters may take heart knowing that at one point it seemed all but certain that Lenin’s fledgling government would fail. Famine had gripped the cities. An imperialist war had thrown Russia’s industry into chaos and all but ruined its transportation system. Civil war had broken out and predatory hostile states had launched military invasions to smother the infant government in its cradle. Yet, in the face of these tremendous challenges, the Bolsheviks survived and over the next seven decades went on to build a great industrial power that eliminated unemployment, overwork, economic insecurity, extremes of inequality, and economic crises, while almost singlehandedly eradicating the scourge of Nazism. And it did so without exploiting other countries but helping to build them economically and escape colonialism and imperialist domination, often at great expense to itself. Similarly the Syrian government may overcome its challenges, both internal and external, and carry on a course of independent, self-directed development, free from the backwardness of Islamic fundamentalism, sectarianism and domination by the world’s great plutocracies. Let’s hope so.

[8] See the Syrian page of The Heritage Foundations’ Index of Economic Freedom.

[14] Stephen Gowans, “Wars for Profits: A No-Nonsense Guide to Why the United States Seeks to Make Iran an International Pariah”, What’s Left, November 9, 2011.