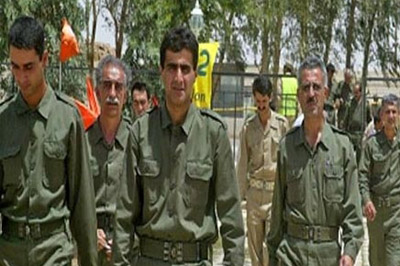 In an act of unequivocal and explicit hostility toward Iran, the United States took the name of Mujahedin-e-Khalq Organization (MKO) off its list of foreign terrorist organizations on Friday, September 28, showing its unconditional support to the sworn enemies of the Iranian nation straight from the shoulder.

The U.S. government announced the decision a few days after the Secretary of State Hillary Clinton submitted a file of classified information about the terrorist cult to the Congress.

The decision was made under the pretext that MKO has not carried out any terrorist operation over the past 10 years. This controversial announcement which bespeaks of the United States’ undeniable animosity with the Iranian people comes while there are several reliable documents confirming that the MKO is responsible for the killing of more than 40,000 Iranians during the 1980s war between Iran and Iraq. This gang has also assassinated Iran’s former President Mohammad Ali Rajaei, Prime Minister Mohammad Javad Bahonar and judiciary chief Ayatollah Mohammad Beheshti in the first years of Iran’s Islamic Revolution in 1979. Since 2010, it has also assisted Israel’s Mossad to kill four high-ranking Iranian nuclear scientists in a bid to thwart Iran’s scientific progress.

Immediately after the announcement by the U.S. government, the Paris-based leader of the terrorist group Maryam Rajavi made a statement, hailing the decision: "this has been the correct decision, albeit long overdue, in order to remove a major obstacle in the path of the Iranian people’s efforts for democracy." Rajavi promised that her group will step up pressure on Iran, and one may easily visualize what devilish and malicious plans they have in mind for the people of Iran.

The MKO which receives underground funding from Israel and some of the Western governments had invested a lot in attracting the support of high-ranking American politicians and is said to have paid fees amounting from $15,000 to $30,000 to these people as an incentive to compel them to attend their rallies and give speeches in support of their anti-Iranian activities.

The former Democratic governor of Pennsylvania, Edward G. Rendell, admitted in March that he had received a total of $150,000 from the group to support their cause.

One day after the U.S. government de-listed MKO, Lord Ken Maginnis, a neo-conservative member of the House of Lords and a former UK parliamentarian called it a "landmark decision by U.S. State Department" and "a victory for justice."

"Now, the best way to ease the threat of a nuclear-armed Iran is to facilitate a regime change in Tehran. And that is on the horizon. The Iranian resistance doesn’t need troops or arms; it needs the support of freedom-loving people and of governments that eschew tyranny," he wrote in an article.

There are credible reports, indicating that MKO members have received considerable amounts of money, military training and equipments from the states which are hostile to Iran and fear of its growing influence in the Middle East, including the United States, Israel and Saudi Arabia.

In an article published in New Yorker on April 6, 2012, the renowned investigative journalist Seymour Hersh revealed that how the U.S. government has furtively supported the MKO terrorists. The article entitled "Our Men in Iran?" documented that members of the MKO were trained in communications, cryptography, small-unit tactics and weaponry by the Joint Special Operations Command (JSOC) at a base in Nevada starting in 2005.

"JSOC instructed MEK operatives on how to penetrate major Iranian communications systems, allowing the group to intercept telephone calls and text messages inside Iran for the purpose of sharing them with American intelligence," wrote Nile Bowie in a research article published on Global Research on April 16, 2012. The Joint Special Operations Command (JSOC) is a component command of the United States Special Operations Command and is known to have carried out clandestine operations in Iran with the direct authorization of George W. Bush.

On July 7, 2008, Marsha Reid revealed in an article for Geopolitical Monitor that JSOC has been kidnapping members of Al-Quds force of Iran’s Revolutionary Guard and taking them to Iraq for torturing and interrogation. It’s said that MKO has been involved in these underground operations.

The prominent investigative journalist Glenn Greenwald wrote on February 10 on Salon.com that MKO has received "substantial fees" from some of the high-ranking U.S. officials to carry out terrorist operations on Iran’s soil: "one of the most under-reported political stories of the last year is the devoted advocacy of numerous prominent American political figures on behalf of an Iranian group long formally designated as a Terrorist organization under U.S. law. A large bipartisan cast has received substantial fees from that group, the Mojahedin-e Khalq (MEK), and has then become their passionate defenders… As The Christian Science Monitor reported last August, those individuals have been paid tens of thousands of dollars to speak in support of the MEK."

According to an NBC News report by Richard Engel and Robert Windrem, the terrorist group "is financed, trained and armed by Israel’s secret service." Two unnamed senior officials in the U.S. government also admitted that "the Obama administration is aware of the assassination campaign" directed at Iran’s nuclear scientists. Iran has long insisted the Israel and the U.S. are using MKO to carry out terrorist attacks on its soil, including the murder of its scientists, and NBC notes that these acknowledgments "confirm charges leveled by Iran’s leaders." NBC has also pointed out that MKO has previously worked with the mastermind of the first attack on the World Trade Center in New York City.

Qorban Ali Husseini Nezhad, a former senior member of MKO who served the group for 30 years as a foreign affairs analyst and Arabic translator and declared his defection from MKO after he ran away from Temporary Transit Location (Camp Liberty) on Wednesday April 25, 2012, revealed terrible facts and figures regarding the complicity of Massoud and Maryam Rajavi with the former Iraqi dictator Saddam Hussein during the years of war with Iran. In a letter following his defection, he unveiled that Saddam Hussein had allocated a remarkable portion of Iraq’s oil revenues to MKO so as to strengthen this terrorist group in its anti-Iranian efforts.

According to Husseini Nezhad, in his last visit with Saddam Hussein in August 2000, Masoud Rajavi "asked Hussein to increase his oil share up to 100 thousand barrels a day (3 million barrels a month), according to the documents and letters I translated or reports composed by his closest comrades that I was able to read. Rajavi received his oil share in coupons which were then sent to Europe to be changed into dollars. Rajavi’s quota from Iraqi oil was 50 to 70 thousand barrels before the visit."

Another MKO defector Maryam Sanjabi also pointed out that the group has been receiving funds from Israel and Saudi Arabia. Speaking in an exclusive interview with Ashraf News website she said there is evidence about the relations and cooperation between the MKO and the Saudi kingdom. She also revealed that when she joined MKO, she was told from beginning that leaving the organization would be impossible: "When I was appointed as a senior member of the MKO leadership council, I was told that I could never leave the organization. Otherwise, I had to kill myself by taking a cyanide pill."

All in all, there are bitter and painful truths behind the MKO and the life of its members. They are a group of misguided people who have intentionally or inadvertently betrayed their countrymen and should be held accountable over the atrocities they have committed and the bloods they have spilled.

The U.S. Department of State’s delisting of MKO will embolden the terrorist gang and make it able to carry out more terrorist operations under the umbrella of a civilian group which is simply opposed to the Iranian government, but their ultimate goal is disintegrating Iran and destroying the current establishment of the country. People of conscience from around the world should lend a hand and counter the threats which this dangerous group poses to the security of Iran, Middle East and the whole world.

Kourosh Ziabari (born 1990) is an award-winning Iranian journalist, peace activist and media correspondent. He has received the Superior Iranian Youth award from Iranian President Mahmoud Ahmadinejad. He has also won Iran’s 18th Press Festival first award in the category of political articles. Kourosh is a member of World Student Community for Sustainable Development and also a member of the European Association for Teaching of Academic Writing. He is a regular contributor to Tehran Times, Global Research, Iran Review and Counter Currents.

Who benefits from the protraction of war in Syria?

Sanctions are a form of warfare used by the U.S. and allies
Diana Johnstone in an interview with Tehran Times

Nobel Peace Prize for Those who Declared War on My Country