France claims to be at the forefront of the fight for freedom in Syria. In fact, she brazenly violates the basic principles of international law to fulfill her dream of re-colonization of a country she held from 1923 to 1944. This ambition has led her to support the creation of Islamic Emirates at the risk of opening the door to a world confrontation. 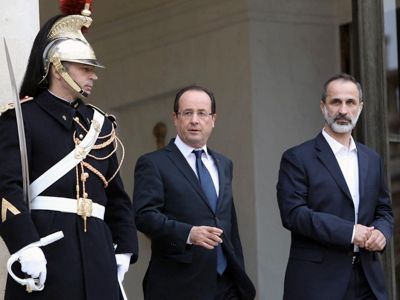 On 17 November, François Hollande welcomed at the Elysée Palace a delegation from the Syrian National Coalition headed by Sheikh Ahmed Moaz al-Khatib. Backing subversive or terrorist activities by armed groups bent on toppling the regime of another State through violence constitutes a crime according to the United Nations Charter and the Declaration on Principles of International Law.
© Présidence de la République - Laurent Bienvennec

In his speech at the General Assembly of the United Nations on the 25th September, French President François Hollande confirmed his conviction that regime change in Syria was "certain", and that Paris would therefore recognise "the interim government representing the new Syria as soon as it is formed." He also imagined he would be able to choose it himself, by invoking the authority of the National Council, a puppet organisation created by the DGSE [1] and financed by Qatar.

However, the United States very quickly regained control. State Secretary Hillary Clinton denounced the representativity of the National Council, which she said was composed of people "who have not been to Syria for 20, 30, or 40 years", and organised its sabotage. During the Doha Round meeting, which took place on the 11th November under the auspices of the Arab League, US ambassador Robert Ford absorbed the National Council into the National Coalition, which is placed directly under his control. Naturally, that did nothing to improve the knowledge of Syria for those who hadn’t been there for "20, 30, or 40 years", but it was enough to modify the judgement of the State Department – since these people now take their orders directly from Washington, they are considered legitimate.

However, France continues to entertain its dreams of re-colonising Syria. At the UN, François Hollande had requested that the Security Council give him a mandate to administrate "the zones liberated by the rebels", on the model of the mandate awarded to France by the League of Nations for the whole of Syria, between 1923 and 1944. According to this same logic, France and the Cooperation Council for the Arab States of the Gulf recognised the Syrian National Coalition as "the only legitimate representative of the Syrian people" accredited to "set up a provisional government". Moreover, Paris asked the European Union - which recently received the Nobel Prize for Peace - to lift their arms embargo in order to supply the "liberated zones".

It seems that the French officials, swept along by their dreams, have not realised the gravity of their proposals if they were to be put into effect. They propose no more or less than challenging the sovereignty of Nation States, a principle which has been the foundation of international law since the Peace of Westphalia Treaties of 1648, and which became universal in 1945 with the United Nations charter and the decolonisation which resulted.

Whether or not we approve of Bashar al-Assad, it must be recognised that he currently governs the whole of Syria with the support of the majority of the Syrian people. But France chooses to ignore this reality and wishes to define, arbitrarily, who should constitute the Syrian government. On this basis, France wants to assume the right to administrate and arm the "liberated zones", over which flies the three-starred flag that she had once imposed on the country. This procedure was accepted before 1945 in order to justify certain forms of colonisation, but was recused in those regions of the world where the principle of Nation-State sovereignty was applied.

73 years ago, Germany imposed a Nazi Prime Minister on Vienna, and used him to legitimize the annexation of Austria. There followed a series of territorial conquests which it was only possible to counter by the Second World War. There is no doubt that if French logic is applied, it would open the way to a Third World War, as stated by Bashar al-Assad in his interview with Russia Today on the 9th November [2] Furthermore, French officials do not seem to have realised the practical forms their project would adopt if it were to be applied. What they call the "liberated zones" are regions with malleable and uncertain borders controlled by the SLA brigades. The only time that one of these zones was stabilized was in the South-West area of Homs, between the end of 2011 and the beginning of 2012. Katiba Al-Farouk proclaimed the zone as the Islamic Emirate of Baba Amr. Schools were destroyed and Sharia Law was declared. All non-Sunnite inhabitants were chased away, and more than 150 people were condemned by a "revolutionary tribunal" to have their throats slit in public.

Four months after the fall of this Islamic Emirate, French President François Hollande received some of its fleeing leaders in Paris, with honours. That was on the 6th July, at the occasion of the meeting of the "Group of Friends of the Syrian People" (sic). Today, France is considering supporting the creation of new Islamic Emirates on the territory of a sovereign state which is a member of the United Nations.

By this logic, France should have recognised the Islamic Emirate of Afghanistan, like that of Pakistan and Saudi Arabia, rather than sacrificing 88 of her soldiers in combat with the Taliban. And it’s difficult to understand why she still maintains diplomatic relations with the Federation of Russia, instead of recognising the provisional government of the Chechen Republic of Ichkeria.

But enough of this absurd logic. In 1970, the General Assembly of the United Nations adopted Resolution 2625, which defined the principles of International Law set out in its Charter. This text proclaims - "Every State has the duty to refrain from organizing, instigating, assisting or participating in acts of civil strife or terrorist acts in another State or acquiescing in organized activities within its territory directed towards the commission of inch acts, when the acts referred to in the present paragraph involve a threat or use of force." As President of the French Republic, François Hollande must guarantee the respect of these principles.