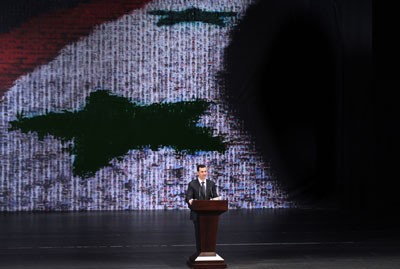 France and the Gulf monarchies are bent on presenting Bashar al-Assad as a bloody tyrant and on blaming him for the 60 000 victims counted by the High Commissioner on Human Rights. Flipping this rhetoric, President al-Assad delivered a speech to the nation on January 6, 2012. He emerged as the leader of a country under attack from the outside and he pronounced the eulogy of the 60 000 martyrs. Symbolizing this claim, a Syrian flag composed of faces of the victims was deployed in the background during his speech.

This intervention was designed to provide concrete details on how to operationalize the peace plan negotiated between the White House and the Kremlin in the context of sharing the Middle East. Though the June 30th Geneva communiqué and the many contacts which followed define the general architecture of the plan, numerous details remain to be negotiated.

The idea of a transitional government headed by Bashar al-Assad and including opposition leaders has been accepted by all parties, with the exception of France and the Gulf monarchies. Paris, Riyadh and Doha continue to interpret the "transition" as the passage from a Syria presided by Bashar al-Assad to a Syria without him. By contrast, Washington, Moscow and Damascus interpret the "transition" as a process of pacification and reconciliation.

The Geneva Agreement establishes the principle of a government of national unity during the transition period. But the current constitution, which is presidential-type, does not allow it. Ministers are revocable at any time by the President as are the secretaries in the USA. Therefore, the creation of a government of national unity requires constitutional reform that gives guarantees to the opposition.

In his speech, Bashar al-Assad invited the opposition to develop with him a "national charter" that would provisionally amend the constitution to set the objectives and modus operandi of the government during the transition period. Stealing the thunder of the Europeans and of the Special envoy of the Secretary Generals of UN and the Arab League, Lakhdar Brahimi, he has announced that the text would be submitted to a referendum. In other words the Syrian people will remain sovereign. Arrangements between the major powers, such as Mr. Brahimi had engineered at Taif at the end of the Lebanese civil war, placing the Land of the Cedars under foreign tutelage that continues to this day, is out of the question.

A second question is about the identification of the opposition. The United States created a national coalition that brings together Syrian personalities from the outside and which is considered representative of the people of Syria by many states. However, the National Coalition has no basis in the country and was formally rejected by the Free Syrian Army.

From the point of view of Damascus and Moscow, the National Coalition, being funded from abroad and having called on Westerners to bomb Syria can in no way participate in any government of national unity. Worse, from the perspective of Washington, the Coalition has committed an unpardonable sin: it has condemned the U.S. registration of the Al-Nusra Front (Al Qaeda branch in the Levant) on its list of terrorist organizations. Therefore, it has positioned itself on the side of terrorists, discrediting itself.

President al-Assad has therefore said that the government of National unity would include all political parties who defended the country throughout this war of aggression.

That is where, obviously, the words of President al-Assad are incompatible with U.S. State department rhetoric. As far as Damascus is concerned, the nation is attacked by self-proclaimed "jihadist" foreign forces. As for Washington, the country is facing a "civil war" in which foreign fighters interfere.

Nonetheless, these views are gradually approaching each other. By registering the al-Nusra Front on its list of terrorist organizations, Washington has de facto politically abandoned the Free Syrian Army. Even if some U.S. politicians differentiate the ASL from Al-Qaida, the main think tanks - including the Council on Foreign Relations (CFR) –affirm on the contrary that the Al-Nusra Front is the main component of FSA and the only one having operational significance. Henceforth, it has become common in the United States to say that the "revolution has been hijacked" or that it has been "commadeered by jihadists." Consequently, Washington can easily be accommodated by the Damascus position. The human rights rhetoric that required that al-Assad be deposed requires today that he be maintained in order to fight terrorism.

All this is of course greatly hypocritical. The new energy reality means that the United States no longer needs to grab Syrian gas; the triple veto of Russia and China has prevented the destruction of the country by NATO; and the Syrian Arab army has held in check the destabilization strategy devised by General David Petraeus. Washington seeks an honorable way out of this failed war. Bashar al-Assad has taken the cue on his own terms.

By calling on the Syrian people to take a position through a referendum, President Assad hits three targets with one stone: he reaffirms the sovereignty of his people denied by Westerners and the Gulf monarchies, he implicitly recalls that he is the only leader to have legitimacy through the ballot box, and he shakes up the agenda. Knowing that there will be no shortage of states questioning the sincerity of such a vote, Bashar el-Assad intends to use their complaints to hasten the deployment of United Nations forces to oversee the referendum and to end violence as quickly as possible. The President has avoided evoking a timeline for the national charter and for the referendum, hoping that the Security Council will propose one speedily.