Mali: One war can hide another

A long time in the making and announced by François Hollande six months in advance, the French intervention in Mali was portrayed as an emergency decision in response to dramatic developments. This scheme aims not only at seizing Mali’s gold and uranium, but more especially at paving the way for the destabilization of Algeria. 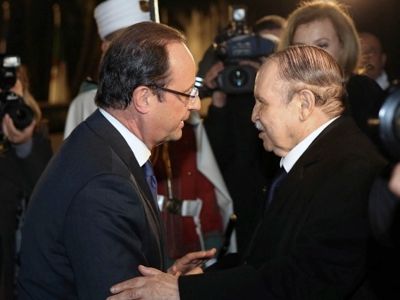 Ever since Nicolas Sarkozy with Laurent Gbagbo, Muammar al-Gaddafi and Bashar al-Assad, the Kiss of Judas has been a characteristic of French diplomacy. In the photo, President François Hollande arrives in Algiers on December 10, 2012 to embrace his counterpart Abdelaziz Bouteflika. Three weeks later, he was stoking the flames of war in Mali to set Algeria ablaze.

"Appetite comes with eating", says the proverb. After having re-colonised the Ivory Coast and Libya, then having attempted to get a hold on Syria, France is now setting its sights on Mali in order to take Algeria from behind.

During the attack on Libya, the French and the British made wide use of the Islamists to fight the power structure in Tripoli, since the Cyrenaican separatists had no interest in overthrowing Muammar al-Gaddafi once Benghazi became independent. At the fall of the Jamahiriya, I was personally witness to the reception of the leaders of AQMI (Al Qaida in Islamist Mahgreb) by members of the National Transitional Council in the Hotel Corinthia, which had just been secured by British special forces who had come from Iraq for that purpose. It was clear that the next target for Western colonialism would be Algeria, and that AQMI would play its part, but at that time I could not see which conflict could be used to justify international intervention.

Paris has imagined a scenario in which war will enter Algeria via Mali.

Shortly before NATO’s capture of Tripoli, the French managed to bribe and return the Tuareg groups. They had the time to supply them with abundant funds and weapons, but it was already too late for them to play a role on the ground. Once the war was over, they went back to their desert.

The Tuaregs are a nomad people who live in the central Sahara and on the borders of the Sahel, which is a vast area shared between Libya and Algeria, Mali and Niger. While they have obtained the protection of the first two states, they have been ignored by the last two. As a result, since the 1960’s, they have been challenging the sovereignty of Mali and Niger on their land. Quite logically, these groups, armed by France, have decided to use their weapons to impose their demands on Mali. The MNLA (National Movement for the Liberation of Azawad) has taken control over almost all of northern Mali, where they live. However, a small group of Tuareg Islamists, Ansar Dine, which is connected to AQMI, has taken advantage of this occupation to impose sharia law in some areas.

On the 21st of March 2012, a strange coup d’Etat was perpetrated in Mali. A mysterious group called CNRDRE ( National Commitee for the Recovery of Democracy and the Restoration of the State) overthrew President Amadou Toumani Touré and declared their intention to restore Malian authority in the north of the country. This resulted in great confusion, since the putschists were incapable of explaining how their actions would improve the situation. The overthrow of the President was even stranger since a presidential election was to be held five weeks later and the outgoing President was not running for office. The CNRDRE is composed of officers who were trained in the United States. They halted the election process and handed power to one of their candidates, who happened to be the Francophile Dioncounda Traore. This sleight of hand was legalised by the CEDEAO (Economic Community of West African States), whose President is none other than Alassane Ouattara, who was placed in power in the Ivory Coast by the French army a year earlier.

The coup d’Etat exacerbated ethnic divisions in the country. Elite units of the Malian army (trained in the United States), whose commander is a Tuareg, joined the rebellion, taking with them their arms and equipment.

On the 10th of January, Ansar Dine - supported by other Islamist groups – attacked the town of Konna. It then moves out of Tuareg territory to spread Islamic law to the south of Mali. The transitional President, Dioncounda Traore, declared a state of emergency and called to France for help. Paris intervened within hours to prevent the fall of the capital, Bamako. Far-sightedly, the Elysée had already pre-positioned in Mali troops from the 1st Marine Infantry Parachute Regiment ("the Colonials") and the 13th Parachute Dragoon Regiment, helicopters from the COS (Special Operations Command), three Mirage 2000D’s, two Mirage F-1’s, three C135’s, a C130 Hercules and a C160 Transall.

In reality, it is highly unlikely that Ansar Dine represented any real threat, since the true combative forces are not Islamists, but Tuareg nationalists, who have no ambitions in the south of Mali.

In order to carry out its military intervention, France has turned to a number of countries for support, including Algeria. Alger is trapped – it either has to accept collaboration with an old colonial power, or take the risk of an influx of Islamists on its territory. After some hesitation, it agreed to open its airspace to French aviation. But then a non-identified Islamist group attacked a British Petroleum gas terminal in southern Algeria, accusing Algiers of complicity with Paris in the Malian affair. A hundred people were taken hostage, but they were not only Algerian and French. The aim of this attack is clearly to internationalize the conflict by transporting it to Algeria.

This technique of French intervention is a copy of the one deployed by the Bush administration - use Islamist groups to create conflict, then intervene and occupy the area under the pretence of restoring order. That is why François Hollande’s rhetoric picks up on the "war against terrorism", which has long been abandoned by Washington. The usual cast of actors can be found in this play - Qatar has bought shares in the major French companies installed in Mali, and the emir of Ansar Dine has close ties to Saudi Arabia.

The arsonist-fireman is also a sorcerer’s apprentice. France has decided to reinforce its anti-terrorist measures, the ’Vigipirate plan’. Paris is not afraid of actions by Malian Islamists on French soil, but of the influx of jihadists from Syria. In fact, over the last two years, the DCRI (Central Directorate of Interior Intelligence) has favoured the recruitment of young French Muslims to fight with the Syrian Liberation Army against the Syrian state. Since the SLA is failing, these djihadists are presently returning to their native land, where they may be tempted, out of solidarity with Ansar Dine, to use the terrorist techniques that they have been taught in Syria.