The Bundeswehr, an "Army in Action"


Less war in the new year? 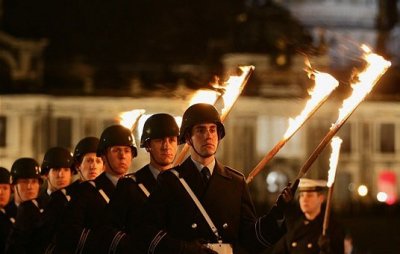 Once there was a German Chancellor who said: “Peace is not everything, but without peace everything is nothing.” That was about 40 years ago, however it is still true, but meets with no response in today’s German policy. An editorial of the Frankfurter Allgemeine Zeitung of 18 December 2012 gives evidence of that by blatantly failing to mention what the Germans have gained through their own efforts after the end of the Second World War.

And you might ask yourself: How is it possible that in a country with a constitution which has put human dignity in the first place and whose commitment to human rights and international law has constitutional status, which even makes the preparation of a war of aggression a punishable offence – how can it be, that in such a country a well-known, internationally respected newspaper complains (!), that the population of this country have “not yet accustomed to an army, whose task goes beyond deterrence, but whose skills must include the targeted killing of aggressors on various venues this world?”

Germany ought to be a state under the rule of law since 1949 and has decided to ban death penalty. Just because human dignity ranks first. Being a state under the rule of law includes that everyone has the right to an orderly trial, even a crime suspect. With the establishment of the International Criminal Court, the international community intended legal action against criminals in authorities and government offices. It also intended to clarify whether vociferous accusations were substantial.

But since the Bundeswehr has become an “army in action”, hence Germany’s state of war was declared permanently, all this applies less or no more. Bertolt Brecht has pointed to the difference between war and peace in his book “Mother Courage”: In times of peace a murderer is threatened by the worst punishment, in war he will be rewarded with decoration. But what price does a society have to pay for such a permanent state of war? Look back in history: from Sparta via Nazi Germany up to today’s United States – a re-evaluation of values, a loss of decency, a brutalization of youth... The former US Secretary of State Madeleine Albright said when asked if she could justify the more than 500,000 children who died as a result of sanctions against Iraq that it was worth the price. Ms Albright is still a “highly regarded” personality. A former German Foreign Minister of a former peace party is still closely cooperating with her until today.

Are there still any ethics in German politics? Or is it similar to the situation described in “Mother Courage” that in war “other laws” apply? Perhaps all teachers at German schools should nevertheless take their constitutional mandate seriously and go through articles such as the one from the Frankfurter Allgemeine Zeitung as an example of modern war propaganda. Thus the students in German schools will have the opportunity to make sure that a different attitude finds its way into German politics when they have grown up. Until then, today’s adults are in demand.

This does not require superhuman powers. With the decline of the American Empire and the fundamental shifts in world politics, the air for breathing freely has become much better, also for Germans.

Why Not Stop Attacking Russia?