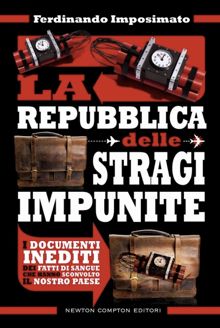 In a book published in early January, La Repubblica delle stragi impunite (The Republic of the Unpunished Massacres. The unpublished papers of the bloody events that have shaken our country), Italian Judge Ferdinando Imposimato places the blame on NATO for organizing the bloody attacks that ripped through Italy during the 1980’s.

Honorable Imposimato presided over several terrorism-related cases, including the kidnapping and ultimate assassination of President Aldo Moro and the attempted assassination of Pope John Paul II. He was a leading anti-Mafia and is currently honorary President of the Supreme Court of Italy. He was elected to the Chamber of Deputies (Parliament) under the label of the Democratic Party of the Left and subsequently to the Senate.

The book comprises, in particular, a 1967 document pointing to the involvement of the Bilderberg Group, a club that brings together the most influential people to defend the interests of NATO.

The long arm of the Bilderberg Group
“The Art of War”

What you don’t know about the Bilderberg-Group

The Bilderberg Plan for 2009: Remaking the Global Political Economy
Video