In Washington, no one is responsible for the Syrian fiasco 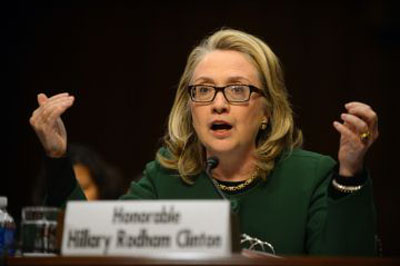 As she bowed out, Secretary of State Hillary Clinton defended her record in an interview granted to the New York Times [1]. Incidentally, “off the record”, she shared a few secrets with journalists who slipped them into a separate article [2].

Concerned with keeping her options open for the presidential election of 2016, she sought to shift the blame for failure in Syria to President Barack Obama. After two years of secret war, the armed groups charged with justifying a NATO intervention and then failing to overthrow the regime themselves, have lost their "revolutionary" appeal and now look like fanatics. Still alive and in place, President Bashar al-Assad is more than ever impossible to outmaneuver. U.S. diplomacy, which weekly announced the "fall of the tyrant", is ridiculed, while Russia and China, who slapped it down three times with their vetoes, are the big winners.

All this comes, according to the outgoing Secretary of State, because no one listened to her. With her former enemy, now turned ally, CIA director David Petraeus, she had submitted to the White House, in late June 2012, a plan of military support for the combatant groups. But President Obama, solely concerned about his reelection, rejected this in favor of the Geneva Communiqué brokered by Kofi Annan.

The idea would have been to take things in hand because they had been badly outsourced by France, the United Kingdom and the Gulf States, who had leaned on repulsive jihadists. Instead, the Secretary of State was working to "create a legitimate opposition which would have served, through negotiations, to delegitimize President al-Assad." To repair the subcontractors’ errors, she had proposed that the United States arm and manage combatant groups directly.

During his hearing before the Armed Services Committee of the Senate, Chief of Staff Martin Dempsey confirmed the existence of this plan. He added that Defense Secretary Leon Panetta and himself were in favor.

The truth is less elegant. By admitting that she worked to overthrow the regime by creating a "legitimate opposition", that is to say "democratic and multi-faith", Mrs. Clinton admits that there was no such opposition and that there still is none. Plus, she admits that legitimacy was and remains on the side of President al-Assad.

By publishing the fact that she presented an action plan to President Obama in June, she admits she has always been opposed to the Geneva declaration. And all indications are that it is she and David Petraeus who sabotaged it at the time. Contrary to what she declares, concerns about reelection did not push Barack Obama to reject the plan, but rather to not immediately punish those who sabotaged Geneva. The White House waited until the day after the election victory to force General Petraeus to resign. Perhaps it had also taken the required steps to neutralize Hillary Clinton and keep her away from her office for a lengthy month.

General Dempsey’s revelations about his support and that of Leon Panetta also aim to open the umbrella. However, as their responsibilities are different, they do this in a different manner. For them, declaring that they were ready to intervene shows that they have not failed and are in no way responsible for the fiasco. In reality, it is they who, following the Russian and Chinese vetoes, validated the analysis according to which one could topple the Syrian regime using "contras" on a grand scale.

Be that as it may, the fact that the outgoing leaders in Washington seek to justify themselves confirms that the page is turned. Obama is changing his team and his policy.

Source : “In Washington, no one is responsible for the Syrian fiasco”, by Thierry Meyssan, Translation Roger Lagassé, Voltaire Network, 11 February 2013, www.voltairenet.org/article177444.html

Source : “In Washington, no one is responsible for the Syrian fiasco”, by Thierry Meyssan, Translation Roger Lagassé, Voltaire Network, 11 February 2013, www.voltairenet.org/article177444.html