French aircraft bombing around the city of Konna caused more deaths among civilians than among Islamists, but the French media keep silent about the "collateral damage" and glorify the "militaristic and triumphalist discourse" of Paris.

Reporting from Konna, Russia Today correspondent Wancha Gonzalo informed that the Islamists were not routed but had simply retreated.

Regarding the number of victims, the RT correspondent cites the specific example of one of the 25 villages that make up the local Malian Konna.

"The final outcome of the liberation is utterly deplorable. According to our survey, the French Air Force killed only two rebels. But it is the people who have paid the heaviest toll: 14 civilians died under the French bombs," says the RT correspondent [Watch video].

"At the time of the bombing, I was not at home. I was praying when they came to tell me that my family had been bombed. They destroyed everything I had: my family and livelihood," testified before the RT camera Idriss Meiga, a farmer from Konna whose wife and 3 children (ages 11, 10 and 6 years ) were killed in the French air raids. 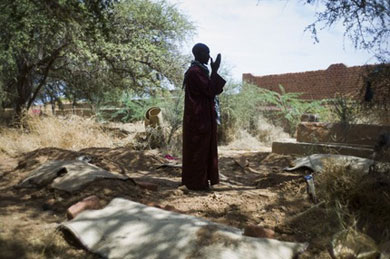 Always from Konna, the RT correspondent also reports on the tragedy that hit the Kampo family. "When the bombing started, the entire population fled, frightened. The Kampo family lost two of their children, drowned while trying to escape the bomb attacks." 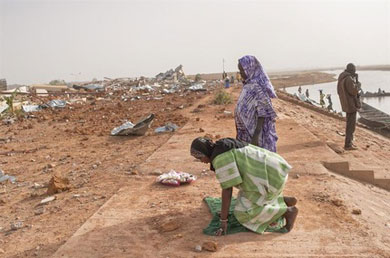 Abdul Kappo explains that his family had to take care of three children whose mother was killed in the bombing. "The small children came running and told us that their mother had been killed. I took them in with us. Their mother died after agonizing for an hour. She left the three children. Now they only have us," said Abdul Kampo.

The report also indicates that voices are being heard in Mali exhorting that the war crimes committed by any belligerent must be taken into account and prosecuted under the Geneva Convention of 1949.