Iranian democracy is thriving. Divisions in 2009 are now obsolete to the point that President Obama has admitted publicly that Mahmoud Ahmadinejad had been elected at the time by a majority of his citizens. The green movement that had united the urban bourgeoisie and part of youth did not last long. As of now, Washington no longer hopes for the overthrow of the regime, but for its division. The U.S. would like to profit from the current crisis between the religious current of the Larijani clan and the nationalist current of the Ahmadinejad family. 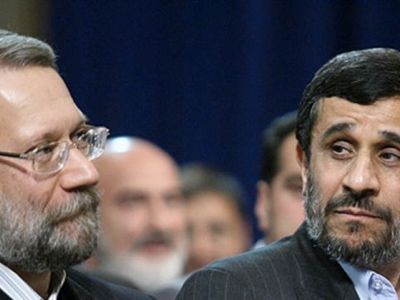 The historic alliance between the religious and nationalist currents is undermined by the imbalance between Ali Larijani?s low turnout and Ahmadinejad’s vast popularity. As we approach the June election, the crisis has suddenly gone public.

Four months from the Iranian presidential election, it remains unclear who will be the candidate to succeed the charismatic Mahmoud Ahmadinejad for four years. According to the Constitution, the outgoing president who served two consecutive terms will not stand, but he could stay close to power and be back in the race at the following election in the manner of a Vladimir Putin.

In 2009, protests had rocked Tehran and Isfahan: supporters of the Liberal candidate were accusing the authorities of rigging the election results. This movement was soon out of breath, but had left deep wounds in the youth movement. It had been shut out by a massive demonstration in support of the institutions of the Islamic Revolution. Iranians, themselves convinced by the losers? arguments, accused the institutions of having called for riot.

Youth had not read the Moussaoui program and knew not of his apology for global capitalism. The young imagined, wrongly, that he represented Liberal social morals. Regardless, they had been persuaded that they must choose between individual freedoms and the "Regime". They suddenly abandoned national commemoration ceremonies.

Stunned by the violence of the blow, the authority had been slow to develop its response. There was first a media defence. For example, a frame by frame expert analysis of the famous video of the young Neda, allegedly being killed by security forces during an anti-regime demonstration, revealed that it was staged. Then there was the organization of discussion groups, facilitated by adult instructors to mentor youth and teach them about the ideals of their elders. All these efforts have borne fruit and we can observe once again a strong participation of those aged 30 years and under in the most recent patriotic ceremonies.

For its part, Washington has spared no effort to disrupt Iranian society and play on generational conflicts. More than a hundred Farsi language satellite television stations were created to flood the country with "the American Dream". They distracted Iranians from their national networks, but it is not certain whether they were convincing on the overall.

While everyone was preparing for another attempt at a color revolution, the surprise came from the ruling coalition. The classic confrontation between nationalists and religious factions hardened and finally burst onto the public scene. The president of the Republic, Mahmoud Ahmadinejad, and that of the Parliament, Ali Larijani, accuse each other of protecting corrupt collaborators. Images of their altercations are rebroadcast in Farsi on Western networks. Despite his exhortations, the Supreme Leader, Ayatollah Ali Khamenei, is unable to calm the protagonists.

Moreover, popular support for Ahmadinejad is massive throughout the country, except paradoxically in Tehran, the city where he was mayor. The rapid industrialization of the country, recent programs to redistribute petroleum profits as monthly allowances for each adult, and widespread construction of housing at subsidized prices have won the allegiance of workers and peasants. Ahmadinejad, who feels that his candidate will be elected by a wide margin, does not hesitate to challenge the more religious opposition and show that if it were up to him, the demands of youth would be met. He even allowed himself to celebrate the beauty of the hijab to better criticize the law which makes it compulsory. Ali Larijani and his brother Sadeq (Head of the Judiciary) can see plainly that their rival is trying to move the lines to impose the candidacy of his chief of staff, Rahim Mashaei Esfendiar. The latter concentrates on rewriting official speeches to change religious references to a universal perspective and not exclusively Shia. Religious folks fear that this flexibility is the open door to the decline of Islam. They respond by spreading rumors that Ahmadinejad’s family has lost its senses, believing itself to be in direct contact with the Mahdi and awaiting his expected arrival by reserving an empty seat in the Council of Ministers. To calm things down and maintain the unity of the Revolution, the Guide could require the Ahmadinejad family to nominate a less divisive candidate than Mashaei.

Western media are prey to schizophrenia. While Farsi networks relish this confrontation, their European counterparts do not say a word about it. They continue to induce their viewers to believe that Iran is a monolithic dictatorship ruled by mullahs. Young people who took to the streets against the "regime" have often become the strongest supporters of Ahmadinejad and should support his candidate in June. They think that with him, the Islamic revolution can reconcile national liberation and individual liberties.

Two-thirds of Iranians behind Ahmadinejad