In guerrilla warfare, the victory belongs to those who have the support of the population. This is why Syria has recently formed popular militias to hold back the Contras supported by the West and the Gulf monarchies. In three months, the result is spectacular: the areas where local militias are already operating have been stabilized. 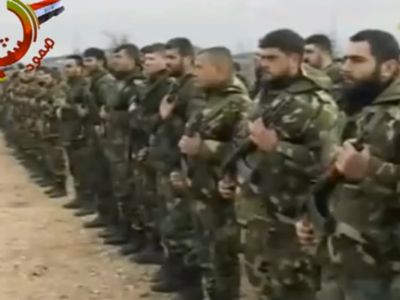 After two years of fighting, it is clear that the Syrian Arab Army, designed to defend the country in case of conventional war, is not able to stabilize the country while pursuing its primary task. It defeated the jihadists without difficulty every time they regrouped, but it does not have the capacity to fight a moving guerrilla force that compensates for its low domestic popularity with powerful foreign logistical support.

Ultimately, Syria has decided to adopt a new strategy that has been proven throughout the world when such a situation arose: the creation of popular militias allowing people to defend their villages or their own familiar neighborhoods. This "Army of National Defense", whose members are drawn from the Popular Committees, is of course linked to the Syrian Arab Army, and one must have done one’s military service in order to join.

Mao explained that to triumph, a guerrilla force must evolve "through the population like a fish through water." However, the Free Syrian Army has been unable to do this. As soon as it controls an area, it commits abuses and the local people rebel against it.

To achieve victory, the Syrian Arab Army must succeed where jihadists failed: it must move "in the population as a fish moves in water." Although originating from the national population, since it is a conscript army, it cannot achieve this alone because its national organization cuts it off from local realities. It must thus rely on intermediate forces which serve as an interface with the local population, in every village and neighborhood.

In addition, the Army of National defence is subject to strict discipline. Weapons and uniforms are provided only to young men and women, cherry-picked among volunteers. It follows that strong men recruited here and there by local officials to ensure safety as best they could must join the militia or go home. Thus, when the Army of National Defense is organized in a village or neighborhood, potential abuses committed by strong-armers stop. The phenomenon of Shabihas disappears.

In the Middle East, the example that immediately comes to mind is the Iranian Basij-e mostaz’afin, which has already served as a model for the Lebanese Hezbollah. Tehran, refusing to involve its Revolutionary Guards on Syrian territory, agreed to train National Defence Army recruits. This was not easy because the Iranians have had to adapt to new recruits who are rarely Shiites and do not intend to convert.

This is an event that profoundly changes the geopolitical facts on the ground in the region. On the one hand because this paramilitary force has quickly stabilized villages in areas where it is already established, especially because now the Basij and Hezbollah find themselves with a little brother, with the same training as them, but being mixed and multi-faith, educated in the secular spirit of the Baath movement and not in that of the Islamic Revolution.

While one of the main goals of the war triggered by the West against Syria was to install a government that would break with Hezbollah and Iran, as admitted by Burhan Ghalioun in an interview with the Wall Street Journal, western action has had the opposite effect. Common resistance has led to a tightening of the ranks despite religious and political differences.

Eight months ago, Sayyed Hassan Nasrallah revealed that during the 33-day war, the Syrian defense minister at the time, General Hassan Tourekmani, personally supervised in Lebanon the deployment of the weapons of the Resistance. Then he said that Hezbollah would not let down its brothers in arms of the Syrian Arab Army in case of trouble. The creation of the National Defence Force will surely strengthen this alliance by close human contact beyond political choices.

This will certainly create impetus for the military wing of Hezbollah to include women and to open up to the many faiths represented in Lebanon.