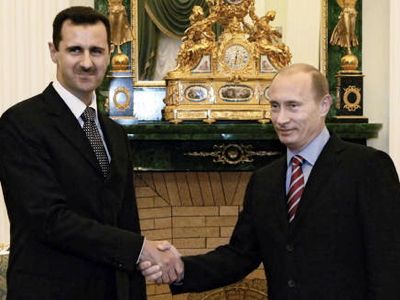 In Moscow, the pro-western intelligentsia see the war in Syria as a distant conflict in which the Kremlin has aligned the country with the wrong side to maintain a useless naval base in Tartus.

Conversely, Putin sees the war as an episode of a conflict which, by virtue of the "Brzezinski doctrine", has pitted since 1978 the Western-Islamist grand coalition against the USSR and then Russia. For the Kremlin, there is no doubt that the jihadists, who learned the ropes in the Middle East, will soon continue their destructive enterprise in Chechnya, Ingushetia and Dagestan. From this point of view, the fall of Syria would be immediately followed by the burning of the Russian Caucasus. Therefore support for the Syrian Arab Republic is not an exotic fad but a national security imperative.

With this in mind, the Kremlin’s expectations towards Syria are only stronger. During the interviews I have had with several Russian leaders during a visit to Moscow, I heard several criticisms.

1 - Moscow does not understand why Damascus has not taken any legal and diplomatic action to assert its rights. The Syrian Foreign Minister takes a defensive stance when attacked before the U.N. Council of Human Rights in Geneva and fails to defend its image. It could easily reverse this trend by bringing a complaint against its attackers before the International Court of Justice, as was once done successfully by Nicaragua against the United States. Of course the objective would not to obtain a conviction by France, the United Kingdom, Turkey, Qatar and Saudi Arabia, which could take place only after three to four years of procedure, but to reverse the rhetoric of the Security Council.

The filing of this complaint should be followed by a letter to the Security Council affirming the right of Syria to respond to its attackers. This letter would open the possibility for groups of Syrian Arab fighters to undertake their own armed actions from London to Doha.

2 - Numerous supporters of Vladimir Putin have become admirers of Bashar al-Assad in whom they see the man for the job. There is no doubt that the Kremlin, regarding his authority as both legitimate and legal, will support him until the end of his mandate. However, Russian leaders are questioning the will of the Syrian president to govern the country beyond. They observe that, despite repeated calls, Bashar al-Assad has not set a political program for the country’s future. To date, they are unaware of his choices on economic, social, cultural and other issues. They see him as the guarantor of a multi-faith society, tolerant and modern, but doubt his intention to go further, to be the one who will reshape and rebuild the country once peace has returned.

3 - Finally, in the Kremlin confidence abounds in the Syrian Arab Army and the Army of National Defense. It is noted that Damascus has not lost a battle against the jihadist Contras, but that the latter have nevertheless won positions without fighting, as shown by the betrayal of Raqqa. Therefore, the Syrian state can still hold out for the time required to finalize a regional Russian-American peace agreement, but it can also suddenly collapse as a result of betrayal.

This is why the Russian leaders are extremely worried by the lack of security around Bashar al-Assad which they tested during an audience he gave in his home to one of their delegations. A guest, ignoring the instructions that had been given at the entrance, kept his cell phone with him throughout the meeting. The phone rang twice without any guard intervening. We know that the Syrian services have foiled several attempts to assassinate Assad sponsored by NATO member states, but it is clear that his personal security is not assured. Some leaders argue that Russia is taking a big risk by supporting a leader who can be assasinated so easily.