Unprecedented in the history of international relations, the governments of four European countries - France, Spain, Italy and Portugal - have closed off their airspace this week to the Bolivian president’s airplane. Is this a case of strict compliance with international laws or further proof of the servility of European ’powers’ towards Washington? To better answer this simple question, French pundit Salim Lamrani sets out a list of 25 facts. 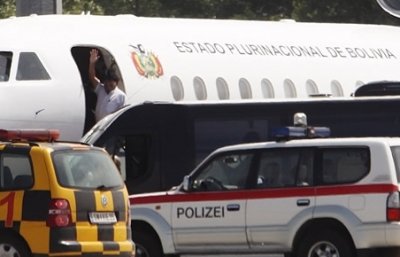 The case of Edward Snowden was the source of a serious diplomatic incident between Bolivia and several European countries. Following an order from Washington, France, Italy, Spain and Portugal forbade the Evo Morales presidential plane to overfly their territory.

1. After an official visit to Russia to attend a summit of gas-producing countries, President Evo Morales took his plane to return to Bolivia.

2. The United States, thinking that Edward Snowden, former CIA and NSA author of the revelations about espionage operations in his country, was in the presidential plane, ordered four European countries, France, Italy, Spain and Portugal, to forbid Evo Morales to fly over their airspace.

3. Paris immediately fulfilled the order from Washington and canceled the authorization to fly over its territory which had been granted to Bolivia on June 27, 2013, while the presidential plane was located just a few kilometers from the French border.

4. So, Paris endangered the life of Bolivian President, who had to make an emergency landing in Austria, for lack of fuel.

5. Since 1945, no nation in the world has prevented a presidential aircraft from overflying its territory.

6. Paris, as well as unleashing a crisis of extreme gravity, violated international law and diplomatic immunity which any Head of State enjoys absolutely.

7. The socialist government of François Hollande seriously compromised the prestige of the nation. France appears in the eyes of the world as a servile and docile country which does not hesitate a moment to obey Washington’s orders, against its own interests.

8. By taking such a decision, Hollande decried France’s voice on the international scene.

9. Paris also becomes an object of laughter in the world. The revelations made by Edward Snowden led to the discovery that the U.S. spied on several European Union countries, including France. Following these revelations, François Hollande publicly asked Washington to stop such hostile acts. However, privately, the Elysée Palace faithfully followed the orders of the White House.

10. After discovering that the information was false and that Snowden was not in the plane, Paris decided to overturn the ban.

11. Italy, Spain and Portugal also followed the orders of Washington and banned Evo Morales’ flight over its territory, before changing their mind after learning that the information was not true and allowed the Bolivian president to follow his path.

12. Earlier, Spain asked to review the presidential plane in violation of all international laws. "This is blackmail; we are not going to allow for a question of dignity. We will wait as long as necessary," said the Bolivian Presidency. "I’m not a criminal," said Evo Morales.

13. Bolivia reported an attack on its sovereignty and immunity against its president. "This is an instruction from the U.S. government," according to La Paz.

15. The Union of South American Nations (UNASUR) urgently convened an extraordinary meeting after this international scandal and expressed "outrage" by the voice of its Secretary General Ali Rodriguez.

16. Venezuela and Ecuador condemned "the offense" and "attack" against President Evo Morales.

20. Havana criticized "unacceptable, unfounded and arbitrary act that offends all of Latin America and the Caribbean."

21. Argentina President Cristina Fernandez expressed her dismay: "Definitely they’re all crazy. A Head of State and his plane have total immunity. There cannot be this degree of impunity."

22. Through the voice of its Secretary General José Miguel Insulza, the Organization of American States (OAS) condemned the decision of the European countries: "There are no circumstances to commit such actions to the detriment of the president of Bolivia. The countries concerned must give an explanation of the reasons why they made this decision, particularly because it endangered the life of the president of a member country of the OAS. "

23. The Bolivarian Alliance for the Peoples of Our America (ALBA) denounced a "blatant discrimination and threat to the diplomatic immunity of a head of state."

24. Instead of granting political asylum to the person who allowed it to discover it was the victim of hostile espionage, Europe, particularly France, did not hesitate to create a diplomatic in order to hand Edward Snowden over to the U.S.

25. This case illustrates that if the European Union is an economic power, it is a political and diplomatic dwarf unable to take an independent stance toward the United States.

France chooses the path of austerity