Cairo: Who is filling the power vacuum?

In Egypt, the more regimes change the more they resemble each other, points out Manlio Dinucci. Hosni Mubarak, the Muslim Brotherhood and the military council are all dependent on the United States to varying degrees. If Washington was caught off guard by recent upheavals, it has nevertheless made sure that victory should go to one of its vassals. The real revolution is still a long way away. 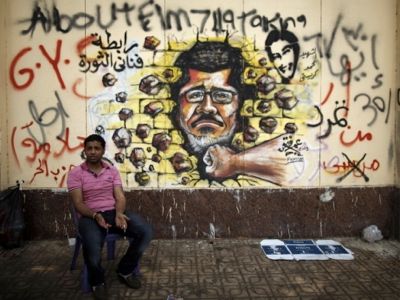 The word starts with ’c’ but it can’t be spoken aloud: That’s how the White House position regarding the coup d’état in Egypt is described in the corridors of Washington. It condemns generic violence, expressing concern about the "power vacuum" and surprise at the events.

Pentagon officials assure us, however, that Secretary of Defense Chuck Hagel has always been in "close contact" with the Egyptian General Abdel Fattah al-Sisi. He’s a man who has the confidence of the Pentagon, who perfected his skills at the U.S. Army War College in Carlisle (Military Academy in Pennsylvania), who is the former head of military intelligence, who is the main interlocutor of Israel, who President Morsi appointed less than a year ago as chief of staff and defense minister.

Five months ago, on February 11, Sisi had had been summoned by General James Mattis, head of U.S. Central Command, whose area includes Egypt since it plays a "stabilizing influence in the Middle East," especially in the confrontation in Gaza. On their agenda (with U.S. ambassador in Cairo Anne Patterson present), "U.S.-Egyptian military cooperation" within the framework of "political instability" in Cairo.

At the same time Washington had announced the provision of other 20 F-16 jet fighters and 200 heavy M1A1 tanks (manufactured under license in Egypt). Thanks to a military funding of $ 1.5 billion that the U.S. has provided annually since 1979 (second only to that given to Israel), the Egyptian armed forces possess the world’s fourth largest fleet of F-16 jet fighters (240) and the seventh of tanks (4,000).

Those using these and other weapons (including those anti-riot weapons made in the USA) are trained by the Pentagon, which every two years sends 25,000 troops to Egypt for the military exercise, "Bright Star."

In this way the U.S. created its main lever of influence in Egypt: a military caste that in its higher ranks also has economic power. That’s what maintained the Mubarak regime for over 30 years in the service of the United States, which also ensured the "orderly and peaceful transition" willed by Obama when a popular uprising toppled Mubarak, which then favored the ascent to the presidency of Mohammed Morsi , a member of the Muslim Brotherhood, to neutralize the secular forces that were the protagonists of the uprising. It then deposed Mohamed Morsi when his administration provoked the uprising of the secular opposition and the young rebels of Tamarrod.

The other lever of U.S. influence in Egypt is economic. Since Mubarak put into effect privatization and deregulation measures Washington wanted and opened the doors to the multinationals, Egypt, although major exporter of oil and natural gas and finished products, has accumulated a foreign debt of over $35 billion. And, to pay the interest of a billion dollars per year, Egypt depends on "loans" from the U.S., the IMF and the Gulf monarchies. This debt is a noose around the neck of the majority of the 85 million Egyptians, about half of whom live in poverty. Hence the deep thrusts of the rebellion and the struggle for a real political and economic democracy. The military establishment so far has succeeded in reining in this rebellion by presenting themselves, from time to time, as guarantors of the popular will.

This leaves them as the real holders of power who serve U.S. and Western interests. The uprising will turn into a real revolution only when the popular forces, both secular and religious, are able to sever this neocolonial bond, opening Egypt to a future of independence and social progress.