The Way Anglo-Saxons Spy on Germans

The revelations of Edward Snowden that never were: the monitoring programs of the United States and its Anglo-Saxon allies have long been known. The novelty resides in their magnitude. No one can escape. For the Germans, it was a rude awakening to discover that, according to the NSA surveillance map, they are the major targets in Europe. Their best ally, to which they have always been faithful, not only does not trust them and but also spies on them. 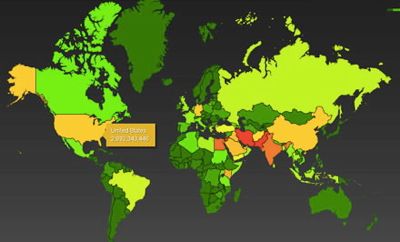 The color scheme ranges from green (least subjected to surveillance) through yellow and orange to red (most surveillance). Note the ’2007’ date in the image relates to the document from which the interactive map derives its top secret classification, not to the map itself.

Nothing to be surprised about. During more than forty years after the WWII ended, the Federal Republic of Germany was at the forefront of the Cold War against the Union of Soviet Socialist Republics and the countries of «Eastern Bloc». Besides, the «big brother» had to watch the Germans themselves. There have always been reasons found for justifying the activities: first it was denazification, and then there were trade dealings with the Soviet Union - the things of dubious character from ideological point of view.

Spying was not very burdensome: There were secret US sites in West Germany, which were used for planning and conducting intelligence gathering activities at the other side of «iron curtain». The very same facilities were used for controlling the territory of West Germany. For instance, by the end of 1980s the US special services provoked a scandal. Imhausen-Chemie chemical company, founded in 1912, was liquidated as a result. German journalists dared to ask questions of delicate nature about the ways the classified commercial information was received. The inquiries were made to vanish against the background of the accusations flow launched against the firm, which had concluded an agreement with Libya to build a chemical plant there. Operation El Dorado Canyon (the 1986 United States bombing of Libya, code-named Operation El Dorado Canyon, comprised air-strikes by the United States against Libya on 15 April 1986. The attack was launched by the U.S. Air Force, U.S. Navy and U.S. Marine Corps via air-strikes in response to the 1986 Berlin discotheque bombing) had been carried out some time before that, the economic sanctions against Libya were being planned – the disclosure of «secret materials» on the planned construction of chemical plant came just in time to be added to the list of accusations against Muammar Gaddafi.

Of course, Germany was and still is a key European NATO member, Berlin has always declared the transatlantic solidarity as a pillar of its foreign policy, the principle it has been adamantly adhered to. Before the unification, Germany had the reputation of an economic giant being a political dwarf. That’s how it had been, for many years the Germans had been taught to work and produce, while following in footsteps of others and avoiding initiatives in foreign policy. Willy Brandt would have never received his Nobel Peace Prize without coordinating each and every step with Washington.

Now the time has passed. The unified Germany is seeking political independence. It makes the overseas partner exasperated. The contemporary United States foreign policy proceeds on the assumption that all future international battles will take part in the Asia-Pacific. But it does not mean the United States should leave Europe. Quite to the contrary, it should guarantee stability behind the front lines.

The PRISM and TEMPORA programs made clear the correlation of forces in the North Atlantic organization. Western media outlets avoid mentioning other countries which along with the United States make up the alliance of intelligence operations known as Five Eyes: the United Kingdom, Canada, Australia, New Zealand. All these states belong to the English speaking Anglo-Saxon bloc. It was an unpleasant surprise for Germans to find out they were watched… by the allies. And they were surveyed more closely than anyone else in Europe! It appeared to be logical to expect this kind of foul play from ill-intentioned Chinese or Russians: year in and year out the German Federal Office for the Protection of the Constitution warns about the threat of industrial espionage. The cases of industrial spying emerging from time to time keep the population vigilant. But the Americans spying on the German friends? The British? Alas! The Anglo-Saxons «close circle» cherishes the friendship, but does not find it redundant to spy on a friend.

A surge of anti-US sentiments in Germany is a natural reaction to the disclosure… As Frankfurter Allgemeine forum readers put it: «America is so dirty, it stinks strong enough to smell in Europe. Scandals, unjust wars, military crimes, haughtiness displayed at trade talks – all these are features of global dictatorship.. and we are drawn into the whirlpool of evil». «Americans still behave like cowboys». There are voices raised calling for freezing the just started talks to create the «economic NATO» – a free trade zone between the European Union and the United States.

What hurts most is the fact that the Germans, the respectable people, who have proven their loyalty, are watched more closely than the neighbors. Michael Hartmann, spokesman on domestic issues for Germany’s opposition Social Democratic Party (SPD), says there is no justification for mass surveillance of Germans. Really? From the point of view of US hegemony advocates, there are enough reasons to rebuke Germany for. Where were the Germans in January 2003, when the eight heads of states published a joint statement in support of America? The letter of eight supporting the US intervention in Iraq was signed by the leaders of Great Britain, Italy, Spain, Portugal, Denmark, Poland, the Czech Republic and Hungary. Who dared to abstain in the United Nations Security Council when it came to vote on the no-fly zone in Libya? Germany was the only one among all Western countries who did it. Even after that Guido Westerwelle, who took the responsibility for the risky decision (a national dishonor, according to former Foreign Minister Joschka Fischer), retained his position in the cabinet. He only stepped from the other office he held simultaneously – the one of Vice-Chancellor. Contrary to the tradition, the post was given to Minister of Economy. It’s worth to note how deep the double standards have become enrooted in the Europeans mindset. For instance, if spying takes place in China (Tsinghua University located in Beijing, the Chinese University of Hong Kong) – it’s normal, if it is done in Europe, then it becomes a violation of human rights.

In the case of Germany, it’s the scale of tapping that makes one wonder - 600 million phone connections a day, electronic messages, the user-deleted content of personal Facebook pages stored for thirty days. «Even if you’re not doing anything wrong, you’re being watched and recorded». Edward Snowden told the Guardian. Twenty years have passed but the Ministry for State Security commonly known as the Stasi, the official state security service of the German Democratic Republic or GDR, is still strongly associated with dictatorship in the minds of Germans. So they write, «Here is Stasi to welcome you». «Let’s involve old Stasi agents». «America brings suit against Snowden. Let it bring charges against itself for violating fundamental rights protecting private life and freedom. Stasi opened private letters breaching the norms of privacy. The NSA does the same thing with private electronic messages. No difference. The German Democratic Republic was a dictatorship. What about the United States?» The German social networks posts go farther than a Stasi analogy comparing the United States and British special services with Gestapo. «If it goes further like that, than Gestapo will look like a boys’ choir. Back then the «good Germans», the real Aryans, believed for many years nothing would happen. Where did their infantile hopes lead them to? What about the real Aryans?»

Indeed, unlike in the past, the modern technologies enable exercising total control over people, including trustworthy burghers. German NDR TV channel and Süddeutsche Zeitung newspaper clearly explained the ТАТ-14 is a submarine transatlantic telecommunications fiber-optic submarine communications cable, connecting the United States of America and Germany. It goes through British Isles. Installed by the UK a year and a half ago, the Tempora system has been used for reading the data. A great idea! Leaving ethics aside, there is only one problem left, the data volume exceeds by 192 times the volume of information stored in the entire British National Library.

The program uses key words to filter the whole data flow. The experience of German special services shows the method is not very effective. In 2011 around three million sms were checked being suspected of having relation to illegal arms and human trade. Only 290 short messages were of any interest for intelligence.

According to the official stance of the Federal Republic of Germany, the fight against terrorism cannot justify the total surveillance. The commentaries of social networks corroborate this view. Still, there are people, who think the advantage of exercising total control outweighs the damage to private life. The Germany’s special services appear to be guided by this principle in future. There are media leaks saying the Federal Intelligence Service has established a new department for Internet surveillance. To prevent terrorist threats the Germany’s foreign intelligence agency BND is reportedly planning to invest €100m to expand its internet surveillance capability. German news weekly Der Spiegel reported that BND plans to expand surveillance program to cover 20% of all communications between Germany and foreign countries. The agency plans to hire 100 new employees on a technical reconnaissance team. Some politicians have come up with a surveillance expansion legislative initiatives. Minister of the Interior and Sports Facilities of the federal state of Saxony-Anhalt Holger Stahlknecht initiated a bill introducing new rules of telecommunications surveillance making it obligatory for companies to provide the Office of Constitution Protection with data on Internet users, including an IP, a Pin-Code and a password. «Once the United States of America and Great Britain are caught, then we should make legal the surveillance that actually started a long time ago», says a Mitteldeutsche Zeitung reader. «Welcome to «1984!», a reader of an East German newspaper exclaims with bitter irony.