The contradictions of the European Union regarding Hezbollah

By designating the military wing of Hezbollah as a terrorist organization, the EU expressed its misunderstanding of the Lebanese resistance, which is not and will not become a political party, although it participates in Lebanese politics. Brussels expressed its allegiance to the Anglo-Saxon bloc (including Israel) at the expense of its own principles. 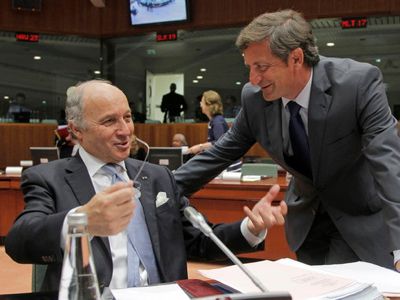 During the European Council, French Foreign Minister Laurent Fabius congratulated himself for his victory with his Slovenian colleague.

Three days late, the European Commission published its decision statement on the addition of the military wing of Hezbollah to its list of terrorist organizations. Contrary to custom, the news had already been around the earth and Hezbollah had responded.

The official document was accompanied by a joint statement from the Council and the Commission stressing that this "does not prevent the continuation of dialogue with all political parties in Lebanon and does not affect the provision of assistance to the country." This review aims to clarify the distinction between civilian and military branches of Hezbollah that allows the European Union to discuss with the former while condemning the latter.

In the same vein, Angelina Eichhorst, Ambassador of the European Union, went to Beirut to visit Ammar Moussawi, who is Hezbollah’s international relations designate, saying that the decision did not affect their relationship.

The problem is that this decision makes no sense.

In its essence, Hezbollah is not a political party, but a network of resistance to the Israeli invasion, made up of Shiite families modeled on the Iranian basiji who’s flag (yellow) it has adopted. Gradually, the resistance has incorporated non-Shiites in an ad hoc structure, and has replaced the failure of the Lebanese state as well to help the families of martyrs and the wounded to rebuild the South of the country, completely razed by Israeli warplanes. This evolution has led to nominate candidates for elections and to participate in government.

Its Secretary General, Sayyed Hassan Nasrallah, has repeatedly expressed reluctance in the face of politics which is for him a corrupt activity. Instead, he has taken every opportunity to reaffirm his ideal to die as a martyr on the battlefield, as his eldest son Muhammad Hadi, following in the footsteps of Hussein, the iman in the Battle of Karbala.

In essence, Hezbollah is the result of a mystical approach and cannot be compared to a European political party. Its soldiers have nothing to gain by fighting and have their lives to lose. They engage in war because their cause is just and it is an opportunity for sacrifice, that is to say, human development. This was the meaning of the Ayatollah Ruhollah Khomeini revolution and it is theirs.

Despite the ambiguity that gives rise to the translation of its name, Hezbollah, as "Party of God", this network is not a political organization and does not intend to become one. Its name, derived from the Koran, is on its flag: "Whoever is allied to God, His Messenger and the believers [will succeed] because it is the party of God that will be victorious." Here one must understand the term "Party of God" in its eschatological sense: it is God who will ultimately triumph over evil at the end of time.

Very strangely, Europeans - who mostly see separation between temporal and religious powers as a democratic achievement - reproach Hezbollah its spiritual essence and want to "normalize" it as a political party. In their minds, the Lebanese resistance is not concerned by the colonization of Palestine and Syria. They would be better off taking care of their political careers than risking their lives in battle.

The decision of the European Council will be of little practical significance. It consists essentially of forbidding members of the "military wing" travel in the EU and freezes their bank accounts: but it is not clear why the clandestine struggle against colonial powers would go to open bank accounts with them.

Why then all the fuss? The inclusion of Hezbollah on the EU list of terrorist organizations is an old demand of Tel Aviv, supported by the Anglo-Saxon Empire. It is a communication effort to assert that the "Good" are the Israelis and the "Bad" are those who refuse have their land stolen. It was presented by Israeli President Shimon Peres to EU governments and the European Parliament on March 12th last. It was taken to the European Council by the British and French foreign ministers William Hague and Laurent Fabius. They were joined by their Dutch and Austrian colleagues, Frans Timmermans and Michael Spindelegger after a strong mobilization of the American zionists, including the former governor of California, Arnold Schwarzenegger.

Hiding the Israeli failure in Argentina

There was urgency for Israeli communicators to act. Since 1994, they have accused Hezbollah and Iran of blowing up the Jewish mutual building of Buenos Aires, killing 85 people. This story is presented as a certainty in many encyclopedias and textbooks. However, Argentine justice has questioned it for years. In January of 2013, Argentina and Iran established a committee of independent lawyers to shed light on the question. Already, it appears that the attack was hatched by the former Minister of the Interior, the Israeli-Argentine Vladimir Corach.

Since its case does not hold water, Tel Aviv has accused Hezbollah and Iran of blasting an Israeli bus in Bulgaria, killing seven people (including a suicide bomber), on July 18, 2012. Initially, the center-right Bulgarian government relayed the charge before being contradicted by its center-left successor. Regardless, for the European Council, in the absence of judicial proof, Hezbollah is politically responsible for an attack on Union territory.

In a general way, Israel accuses Hezbollah of fomenting and sometimes executing twenty attacks against civilians around the world, in thirty years, an accusation that ostracizes the Resistance.

Again, very strangely, the Europeans - who consider the presumption of innocence as taken for granted in a democracy - condemn the suspect before he is found guilty, or even indicted.

On the merits, it has escaped no one that the real novelty in this case is not acknowledged: it was the intervention of Hezbollah in the war in Syria. Since we are betraying our commitment to overthrow President Bashar Assad, at least let us bring our support to the "rebels" in condemning Hezbollah, seems to be the thinking in Brussels. It is this argument which, it seems, has won the European Council decision. On the other hand, it shows the failure of the British and French to deeply ponder a conflict they knowingly triggered to capture Syria while waving the flag of colonization, which became that of the Free Syrian Army.

Especially, this judgement has the merit of clarifying sides with on one side the resistance to colonial oppression and on the other, the colonizing powers.

If the British attitude is not surprising, the United Kingdom claiming its colonial status, it is more so in regard to France, which has alternated through revolutionary and imperial periods.

Thus, Article 2 of the Declaration of the Rights of Man and of the Citizen, adopted in 1789, articulates four fundamental rights, including "resistance to oppression." It is on this basis in 1940, that Charles De Gaulle opposed the armistice between France and the Nazi Reich, taking the lead of the resistance.

In contrast, during the 1880s, Jules Ferry embodied French expansion desired by a faction of employers, forcasting a much better return for their investments than in France, to the extent that it was the taxpayer who paid for the colonial army. To regimentalize the country, Ferry made public school free and compulsory. Teachers, called "black hussars of the Republic", had to convince young people to serve as colonial troops. And it is under the auspices of Jules Ferry that current French President, Francois Hollande, has placed his term.

If modern France is Charles De Gaulle, it could have been Philippe Petain, a reasonable marshal who considered submission to the victorious Reich all the more desirable as he saw it as a means to do away with the legacy of 1789. It is certainly too early for the French elite to rehabilitate it, but to condemn the Lebanese resistance is to condemn to death a second time Charles De Gaulle for terrorism.

Definitely, the ideals that were the glory of France are now better defended in Beirut than in Paris.