The Ergenekon trial verdict did not raise an outcry internationally. At best, the press highlighted the divide that has arisen in the country between those favoring a secular society and the Muslim Brotherhood. For Thierry Meyssan, this trial constitutes exceptional justice and concludes with the imprisonment of all the anti-US leaders: this is a coup. 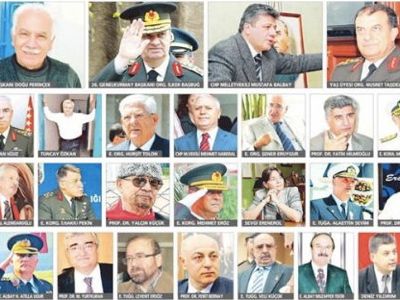 The Ergenekon trial verdict delivered on August 5 at the Silivri prison, convicted 275 military, media and political leaders of conspiracy against the state and sentenced them to heavy prison sentences.

This trial does not meet the standards of democratic justice: it was driven by special prosecutors before special courts in a prison built specifically for this purpose. Many documents cited, supposedly seized during searches, were challenged as false by the defendants. The authenticating witnesses have remained anonymous.

The condemned have in common their opposition to U.S. hegemony and have always been members of the Workers Party (Kemalist-Maoist) (ISCI Partisi), or since the demise of the USSR in the case of the military. Although they represent only a tiny minority of the opposition to the AKP, they form a movement which is ideologically capable of fighting Turkey’s membership in NATO and opposing their country’s commitment to the secret war against Syria.

In contrast, the government and Recip Tayyip Erdogan’s political followers form the Turkish equivalent of what was the Italian Christian Democracy: absolute support for the Atlantic Alliance, they intend to refuse a "light" version of a confessional party. In reality, the Christian Democrats structured themselves around Masonic lodges and was funded by the mafia. Similarly, the AKP is structured around the Muslim Brotherhood, which, in secret, has nothing to envy the P2-and is funded by the plundering of northern Syria.

In 2003, Parliament opposed the attack on Iraq by NATO from Turkey, up to denying the Alliance the use of its Turkish bases, something no other NATO Member State has done, not even Germany or France. In contrast, in 2012, Erdoğan proposed and obtained the installation on Turkish territory, in Izmir, of one of the most important command centers of the Alliance, the Landcom, responsible for all land forces of its 28 Member States, in order to invade and destroy neighboring Syria.

The links between the Turkish state and the mafia have been known since the Susurluk accident (1996) when the head of the counter-insurgency, Husseyin Kocadag of the right-wing Gray Wolves militia and drug dealer on the run, Abdullah Catlin and his mistress yet hired killer Gonca Us, died in the car of Conservative MP and drug baron, Sedat Bucak. These links extend to the present day with the pillage of Syria of which more than a thousand factories have been dismantled, stolen and taken to Turkey, and of which many archaeological resources are being illegally sold in Antioch, under the protection of the State.

After a dozen years of AKP government, Turkey holds the world record for imprisoned senior officers (over 2/3 thirds of the generals and admirals), political leaders - including parliamentary journalists - and lawyers. A symbol of double standards, this state is nevertheless still considered a "democracy", is still a member of NATO, and continues to discuss the process for its membership with the European Union.

The strategy of the Foreign Minister, Ahmet Davutoğlu, to bring the country out of the doldrums, in which it has been held since the breakup of the Ottoman Empire, by problem-solving with neighbors, was initially a success but has turned into a nightmare. Premature certainty of the collapse and dismemberment of Syria had led the AKP to act with arrogance, quarrelling again with each of its neighbors.

During the period of improvement in its international relations, Turkey experienced spectacular economic growth: 9.2% in 2010. Erdoğan promised at the time to make the country the 10th largest world producer. Alas! After the wars in Libya and Syria, growth fell to 2.2% in 2012 and could mutate into recession in 2013.

As the establishment of its dictatorship unfolded, the AKP has changed its policy and reduced its popular base. In the parliamentary elections of June 2012, it had 49.83% of the votes, which assured it a large majority in the Grand National Assembly. But in applying the guidelines of the Muslim Brotherhood to "Islamize society," it has cut itself off from the Alewis, the Kurds and pro-secular Sunni organizations in the country. It has thus become a minority-as shown by the wave of June protests in Taksim Square, and is henceforth descending into authoritarianism.