Peace in Syria is possible… within the week

Since the fall of the Soviet Union, the United Nations has been giving the impression that it’s nothing more than a simple channel for US policy, to the point that Washington now calls its allies the « international community ». And yet the world of George W. Bush is long gone. The UN can once again play its part in service of peace when one of its members is threatened by the United States. Thierry Meyssan calls for an end to the Syrian crisis, just like the Suez Canal crisis, by convening an « Emergency Special Session» of the General Assembly. 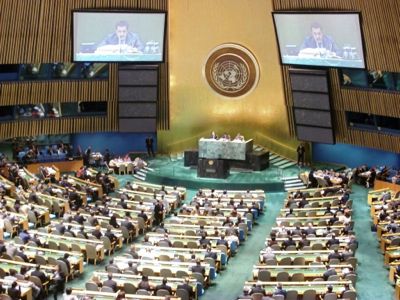 The General Assembly of the United Nations.

The revolt of the British Parliament against David Cameron’s colonial project, followed by the transfer of the Syrian dossier to the United States Congress by Barack Obama, profoundly modifies the international balance of power, even if Congress should finally decide to authorize an attack.

As things stand currently, the world’s states are regaining their right to speak out. Only France still seems liable to pressure its vassal states in an attempt to dictate a bellicist policy. Neither the United Kingdom, nor the United States – at least until the Congress has voted – can do so.

The majority of the world’s states are fully aware of the consequences that Western intervention could produce in the Near East. Whether they support Syria or would like to see the downfall of its institutions, this majority can only oppose the bombing of Syria, even when it’s termed « surgical » bombing.

Consequently, for a period of a little more than one week, there exists a window of possibility to stop the war - the General Assembly of the United Nations can consider the question and forbid its members to attack Syria, which includes the possibility of forbidding the use of weapons of mass destruction by the Syrian governement.

In law, the defence of peace is the domain of the Security Council alone, not the General Assembly. However, when the Council is unable to legislate, due the blockage of its permanent members, the General Assembly can take note of this blockage and assume the power to decide in its place. At that point, the Assembly could adopt a resolution which forbids any attack on Syria.

According to a note published by the British government, an intervention by the major powers would be legal outside of a Security Council mandate if its only aim was to defend civilian populations by preventing the use of weapons of mass destruction, and if it employed only the means proportional to acheiving that aim. Of course, as in Libya, this is simply a justification for engaging in war, which then segues into aggression, pure and simple. Mr. Cameron has never had any intention of respecting his official aims.

This is how, in 1956, the international community, then led by Soviet Union and the United States, forced France, Britain and Israel to leave the Suez Canal, which they had invaded.

Such a decision would not prevent the United States, Saudi Arabia and Turkey from continuing to supply weapons and money to djihadist and mercenary groups, but no state would have the right to bomb Syria.

This resolution would have the immediate effect of precipitating the enforcement of the Geneva 2 Peace Conference, since it would deprive armed groups of the hope of winning. The passage of time would only benefit Syria faced with its aggressors.

Already, Cuba has evoked this option in a declaration by its Minister for Foreign Affairs, Bruno Rodriguez-Parrilla. Cuba pointed out that it is the moral duty of the UN Secretary General, Ban Ki-moon, to personally collect the signatures necessary for covening this exceptional emergency session. This would be an occasion for him to demonstrate to those who consider him little more than a pawn of the United States that they are wrong. It would be safer to trust Ambassador Bashar Jaafari with unlocking the situation.

Peace is at hand.