Chemical weapons arsenals and the hidden truths about the "Convention" 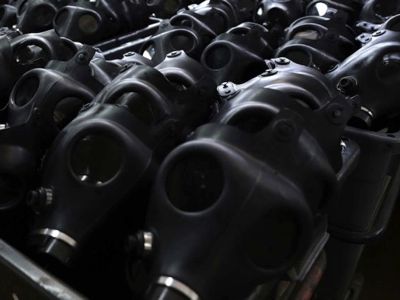 The hammering by politicians and the corporate media about chemical weapons use in Syria, which, according to secret CIA "evidence" was used by government forces, has generated the widespread false impression that it is only Syria that now possesses such weapons and threatens the rest of the world with them. That’s the power of the weapon of mass distraction, which is able to focus public attention on a single point, making everything else vanish.

Germany was the first to use chemical weapons in 1915-17: First liquid chlorine and phosgene, later the asphyxiating and blistering Mustard gas. In response, Britain and France also produced this deadly gas. The nerve gas Tabun, which causes death by suffocation, was discovered in 1936 by researchers from the German company IG Farben (the same company that produced Zyclon B, used in gas chambers). In 1936 Italy used chemical weapons in Ethiopia, and had already used it in Libya in 1930. Germany produced the even more lethal chemical agents Sarin and Soman. They were not used by Adolf Hitler, probably because at first he feared retaliation by the United States and Great Britain, which had major chemical arsenals, and in the last phase of the war, because not enough planes remained to carry out such an attack. During the Cold War the chemical arms race accelerated with the discovery of the most toxic nerve gas, VX, whose production began in the United States in 1961. Then the first binary chemical weapons were produced in the United States: These are bullets, bombs and missile warheads that contain two separate chemical components, which when separate are relatively harmless, but which during the trajectory are combined in a toxic mix. The USA and the USSR amassed the largest and most lethal chemical weapons, but the "chemical club" rapidly expanded to include other countries.

After the Cold War ended, the Chemical Weapons Convention came into force in 1997, banning the use of chemical weapons and establishing the destruction of existing stockpiles. Now 16 years later, however, neither the United States nor Russia has completely destroyed its stockpiles, since they have not observed the established deadlines. According to official data, the U.S. still holds approximately 5,500 tons of chemical weapons. Russia has much more, about 21,500, inherited from Soviet arsenals. A simple quantitative comparison, however, is misleading: the United States, Russia and other technologically advanced countries retain the ability to build sophisticated binary chemical weapons and always combine their nuclear war exercises with those of chemical warfare. According to one dimension, which is also quantitative, the United States, which is leading the campaign against chemical weapons in Syria, owns approximately six times what Syria does. According to an estimate by French intelligence, probably inflated, Syria is supposed to have about 1,000 tons of chemical agents and substances suitable for producing chemical weapons.

Why hasn’t Syria signed the Chemical Weapons Convention? The answer basically is that the Syrians need to counter Israel’s nuclear weapons and not only that. In the 1960s Israel had also built a sophisticated arsenal of chemical weapons. But just as with Israel’s nuclear weapons, this remains secret because Israel has signed but not ratified the Chemical Weapons Convention. According to a report of "Foreign Policy," based on a 1983 CIA document, advanced research on chemical weapons were conducted in the Israeli Center for Biological Research, and these weapons were produced and stored in the Negev Desert, at Dimona, where Israel also produces its nuclear weapons. Even the Sept. 10 "Jerusalem Post" reports this. Even if Israel has not maintained such an arsenal, writes the journal "Jane’s," it has the ability to "develop an offensive chemical weapons program within several months." (Jane’s CBRN Assessments, 23 July 2009, www.janes.com) It is understandable then why even Egypt has not signed the Chemical Weapons Convention.

The U.S. and Israel have never officially violated the rule prohibiting the use of chemical weapons, since the chemical dioxin (Agent Orange), used extensively by the U.S. in Vietnam, and the chemical white phosphorous bombs used by the U.S. in Iraq, Yugoslavia, Afghanistan and Libya, and by Israel in Gaza, are not considered chemical weapons. This is not much of a consolation for the families who have seen children born deformed from Agent Orange or burned to death by white phosphorus.