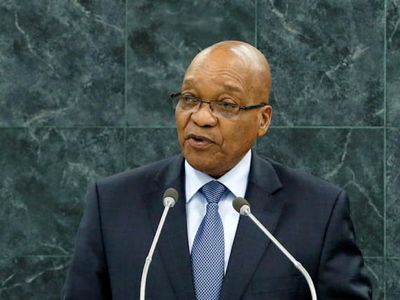 Mr President,
Your Majesties and Excellencies,

Development and security are two sides of the same coin. The best way to ensure both is through good governance and the promotion of democratic values in all societies.

Allow me therefore Mr President to register again our serious concern that in close to 70 years after its establishment, the UN Security Council still remains undemocratic, unrepresentative and unfair to developing nations and small states, and disenfranchises the majority of the Member States of the United Nations who form the majority in this General Assembly. We cannot remain beholden indefinitely to the will of an unrepresentative minority on most important issues of international peace and security.

There has been too much talk about the need for reform, with too little action. We would like to challenge the Assembly today: Let us set ourselves the target to celebrate the 70th Anniversary of the United Nations in 2015, with a reformed, more inclusive, democratic and representative UN Security Council!

When discussing the UN Security Council the matter of the Syrian Arab Republic comes into focus. We have expressed our dismay at the use of chemical weapons in Syria. There is no cause that could justify the use of weapons of mass destruction, by anyone or anybody under any circumstances.

It is our strongly held view that any political transition in Syria must come about as a result of the will of the Syrian people, and not as a result of a force of arms.

We welcome the recent positive developments such as the decision by Syria to accede to the Chemical Weapons Convention and the ongoing bilateral consultations between the Russian Federation and the United States.

We support all the diplomatic efforts aimed at finding a solution to this matter.

The international community has an opportunity to use the Syrian experience to ensure that matters of this nature are handled correctly going forward, using existing instruments within the multilateral system of global governance.

Next year South Africa will celebrate the 20th Anniversary of freedom and democracy.

We will forever be grateful to those in the international community, including the United Nations, who stood beside us in our long struggle for liberation.

We look forward to celebrating our anniversary of freedom with the United Nations and to strengthen our partnership. A strong partnership with the UN is critical for the future we want for the people of South Africa.

We also take this opportunity to thank the United Nations and the international community for support during the recent hospitalisation of our beloved founding President of a free and democratic South Africa, His Excellency Nelson Mandela.

We thank you for your support and good wishes. The UN declared 18 July, his birth date, as International Mandela Day. This has become a catalyst to promote service to humanity worldwide. We thank the UN for this gesture.

Our revered former President continues to respond to treatment at his home. His family and our people have warmly welcomed the support he continues to receive from the global community. We are humbled and very grateful for this support.

As we celebrate our freedom and democracy we remain mindful that our struggle is not complete until the people of Palestine and Western Sahara enjoy their right to self-determination.

In the same manner that the United Nations stood by South Africa, we would like to see this organisation being at the forefront of efforts towards self-determination for the peoples of Palestine and Western Sahara.

We are deeply concerned about continued illegal settlement activities in the West Bank in violation of international law.

These illegal settlement activities jeopardize the realization of the two-state solution.

The Cuban people hold a special place in our hearts because of that country’s sacrifice for African peoples in their quest for freedom. We will therefore continue to struggle with them for their economic liberation.

The 68th Session of the General Assembly will undertake critical work for the future of our people.

Let us tackle the work ahead in a manner that, when future generations look back on this moment, they will be able to say that the leaders of this generation laid the foundation for the eradication of poverty, for building a world society of equality, and for world peace.

Let me borrow from the words of our former President Nelson Mandela on his inauguration day in 1994 when he said; "We understand it still, that there is no easy road to freedom.
We know it well, that none of us acting alone can achieve success.
We must therefore act together as a united people, for national reconciliation, for nation building, for the birth of a new world.
Let there be justice for all.
Let there be peace for all.
Let there be work, bread, water and salt for all.
Let each know that for each the body, the mind and the soul have been freed to fulfill themselves".

Statement by Jacob Zuma at the 66th UN General Assembly

Remarks by Jacob Zuma to the 64th UN General Assembly