In 2011 when Muhammar Qaddafi refused to leave quietly as ruler of Libya, the Obama Administration, hiding behind the skirts of the French, launched a ferocious bombing campaign and a “No Fly” zone over the country to aid the so-called fighters for democracy. The US lied to Russia and China with help of the (US-friendly) Gulf Cooperation Council about the Security Council Resolution on Libya and used it to illegally justify the war. The doctrine, “responsibility to protect” was used instead, the same doctrine Obama wants to use in Syria. It’s useful to look at Libya two years after the NATO humanitarian intervention. 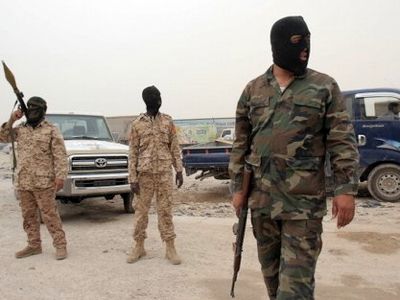 Libya’s economy is dependent on oil. Just after the war, Western media hailed the fact the oil installations were not damaged by the population bombing and oil production was near normal at 1.4 million barrels/day (bpd). Then in July the armed guards hired by the government in Tripoli suddenly revolted and seized control of the eastern oil field terminals they were supposed to protect. There is where the vast bulk of Libya’s oil is produced, near Benghazi. It goes by pipeline to tankers on the Mediterranean for export.

When the government lost control of the terminals production and export fell sharply. Then another armed tribal group seized control of two oilfields in the south blocking oil flow to terminals on the northwest coast. The tribal occupiers demanded more pay and went on strike to demand pay and an end to corruption. The end result is today, early September Libya pumped a mere 150,000 barrels of its capacity of 1.6 million bpd. Exports have fallen to 80,000 barrels per day. [1]

Libya is an artificial state like much of the Middle East and Africa, carved out in the colonial era of World War I by Italy. It is ruled by tribal consensus among numerous tribes. Qaddafi was chosen in a long process of voting by tribal elders that can take up to 15 years I was told by one expert. When he was murdered and his family hunted, NATO forced rule by a Muslim Brotherhood-dominated National Transitional Council (NTC).

Now in August a new Assembly was elected dominated again by the Brotherhood as in Morsi Egypt or Tunisia. Sounds nice on paper. The reality is that, by all accounts lawless bands, armed for the first time during the war with modern weapons, including foreign Al Qaeda and other jihadists are carrying out daily bombings across the country for local control. Tripoli itself has numerous armed gangs controlling sections of the capitol. It is turning into an armed battle between local tribal millitias that are forming and the Brotherthood that controls the central government. Leaders in the provinces of Cyrenaica and Fezzan are considering breaking away from Tripoli and rebel militias mobilizing across the country. [2]

Bombings in Tripoli are daily as lawlessness spreads

Nuri Abu Sahmain, Muslim Brotherhood President of the newly elected Congress has summoned militias allied to the Brotherhood to the capital to try to prevent a coup, in a move the opposition sees very much like a coup by the Brotherhood. The main opposition party, a center-right National Forces Alliance, as a result just deserted Congress together with several smaller ethnic parties, leaving the Brotherhood’s Justice and Construction party heading a government with crumbling authority. "Congress has basically collapsed," said one diplomat in Tripoli. [3] The Obama Administration has promoted a takeover across the Muslim world from Egypt to Tunisia to Syria by the secretive Muslim Brotherhood as part of its long-term strategy of controlling the Muslim Arc of Crisis from Afghanistan to Libya. As the Saudi-backed military coup against Brotherhood president Muhammed Morsi in Egypt in July showed, the Obama strategy has some problems.

With rising violence the Interior Minister Mohamed Khalifa al Sheikh resigned in August. Some 500 prisoners in Tripoli jail did a hunger strike to protest being held two years without charges. When the government ordered the Supreme Security Committee to restore order, they began shooting prisoners through the bars. In July 1200 prisoners escaped a jail after a riot in Benghazi. In short lawlessness and anarchy is spreading. [4]

Ethnic Berbers, whose militia led the assault on Tripoli in 2011, temporarily took over the parliament building in Tripoli. Because the US and NATO was adamant it wanted no “boots on the ground,” instead they freely gave arms to any and all rebels who would shoot at the Qaddafi government troops. Now they still have the guns and Libya was described to me by one French journalist who had recently been there as “the world’s largest open air arms bazaar,” where for cash anyone can buy any modern NATO weapon.

Foreigners have mostly fled Benghazi since the American ambassador was murdered in the US consulate by jihadi militiamen last September. And Libya’s military prosecutor Colonel Yussef Ali al-Asseifar, in charge of investigating assassinations of politicians, soldiers and journalists, was himself assassinated by a bomb in his car on 29 August. [5]

Prospects are grim as the lawlessness spreads. Sliman Qajam, a member of the parliamentary energy committee, told Bloomberg that “the government is running on its reserves. If the situation doesn’t improve, it won’t be able to pay salaries by the end of the year.”

The Obama Administration argues that the not-yet-proven use by the Assad government of chemical weapons in Syria justifies a bombing war by NATO and allies such as Saudi Arabia, Qatar, Turkey and Jordan, based on the “humanitarian” doctrine deceptively known as “responsibility to protect,” which argues that certain violations of human rights or safety are so serious as to transcend international law, UN Charters or US constitutional requirements and allow on moral grounds any US President to bomb any country he or she chooses. Something is not quite right here. ..

[2] Patrick Cockburn, “We all thought Libya had moved on it has but into lawlessness and ruin”, 3 September 2013,