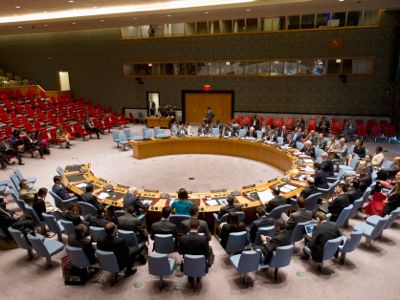 “The Security Council reaffirms its strong commitment to the sovereignty, independence, unity and territorial integrity of Syria and all other States affected by the Syrian conflict, and to the purposes and principles of the Charter of the United Nations.

“The Security Council calls on all parties to respect the UN guiding principles of humanitarian emergency assistance and stresses the importance of such assistance being delivered on the basis of need, devoid of any political prejudices and aims.

“The Security Council is appalled at the unacceptable and escalating level of violence and the death of more than 100,000 people in Syria as reported by the UN Secretary-General and the UN High Commissioner for Human Rights. It is gravely alarmed by the significant and rapid deterioration of the humanitarian situation in Syria. It notes with grave concern that several million Syrians, in particular internally displaced persons, nearly half of whom are children, are in need of immediate humanitarian assistance and that without urgent increased humanitarian action, their lives will be at risk.

“The Security Council also condemns all violence committed in Syria, irrespective of where it comes from, including all acts of sexual and gender-based violence and abuse, and recalls that international law prohibits rape and other forms of sexual violence.

“The Security Council further condemns all grave violations and abuses committed against children in contravention of applicable international law, such as recruitment and use, killing and maiming, rape and all other forms of sexual violence, attacks on schools and hospitals as well as arbitrary arrest, detention, torture, ill treatment and use as human shields.

“The Security Council moreover condemns increased terrorist attacks resulting in numerous casualties and destruction carried out by organizations and individuals associated with Al-Qaida, and calls on all parties to commit to putting an end to terrorist acts perpetrated by such organizations and individuals. The Council reaffirms, in this regard, that terrorism in all its forms and manifestations constitutes one of the most serious threats to international peace and security, and that any acts of terrorism are criminal and unjustifiable, regardless of their motivation, wherever, whenever and by whomsoever committed.

“The Security Council recalls that all obligations under international humanitarian law must be respected in all circumstances. It recalls, in particular, the obligation to distinguish between civilian populations and combatants, and the prohibition against indiscriminate attacks, and attacks against civilians and civilian objects, as well as the prohibition on the use of chemical weapons and the employment of weapons, projectiles and material and methods of warfare which are of a nature to cause superfluous injury or unnecessary suffering. The Council urges all parties to immediately cease and desist from all violations of international humanitarian law and violations and abuses of human rights, and calls on all parties to fully respect their obligations under international humanitarian law and to take all appropriate steps to protect civilians, including by desisting from attacks directed against civilian objects, such as medical centres, schools and water stations, and also calls on all parties to avoid establishing military positions in populated areas. The Council recalls in this regard that the Syrian authorities bear the primary responsibility to protect their populations.

“The Security Council also recalls that under international humanitarian law, the wounded and sick must receive, to the fullest extent practicable, and with the least possible delay, medical care and attention required by their condition and that medical and humanitarian personnel, facilities and transport must be respected and protected. To this end, the Council urges free passage to all areas for medical personnel and supplies, including surgical items and medicine.

“The Security Council stresses that the magnitude of the humanitarian tragedy caused by the conflict in Syria requires immediate action to facilitate safe and unhindered delivery of humanitarian assistance in the whole country, including in areas and districts where humanitarian needs are especially urgent. It condemns all cases of denial of humanitarian access, and recalls that arbitrarily depriving civilians of objects indispensable to their survival, including wilfully impeding relief supply and access, can constitute a violation of international humanitarian law.

“The Security Council urges all parties, in particular the Syrian authorities, to take all appropriate steps to facilitate the efforts of the United Nations, its specialized agencies and all humanitarian actors engaged in humanitarian relief activities, to provide immediate humanitarian assistance to the affected people in Syria, including by promptly facilitating safe and unhindered humanitarian access to populations in need of assistance in all areas under their control and across conflict lines. It also encourages further cooperation between the United Nations, its specialized agencies and all parties concerned, including Syrian civil society organizations, to facilitate access and the delivery of assistance in the entirety of the Syrian territory.

“The Security Council further urges the Syrian authorities to take immediate steps to facilitate the expansion of humanitarian relief operations, and lift bureaucratic impediments and other obstacles, including through:

(a) expediting the approval of further domestic and international non-governmental organizations to engage in humanitarian relief activities;

(b) easing and expediting the procedures for the operationalization of further humanitarian hubs, the entry and movement of humanitarian personnel and convoys by granting the necessary visas and permits in a predictable manner, the importation of goods and equipment, such as communication tools, protective armoured vehicles and medical and surgical equipment, needed for humanitarian operations;

(c) promptly facilitating safe and unhindered humanitarian access to people in need, through the most effective ways, including across conflict lines and, where appropriate, across borders from neighbouring countries in accordance with the UN guiding principles of humanitarian emergency assistance; and

(d) accelerating approval for the implementation of humanitarian projects, including those in the revised Syria Humanitarian Assistance Response Plan.

“The Security Council also urges all parties to:

(a) take all appropriate steps to ensure the safety and security of United Nations personnel, those of its specialized agencies, and all other personnel engaged in humanitarian relief activities, without prejudice to their freedom of movement and access, and stresses that the primary responsibility in this regard lies with the Syrian authorities;

(b) immediately demilitarize medical facilities, schools and water stations, refrain from targeting civilian objects, and agree on the modalities to implement humanitarian pauses, as well as key routes to enable promptly — upon notification from relief agencies — the safe and unhindered passage of humanitarian convoys along these routes to access people in need; and

“The Security Council expresses its deep concern at the consequences of the refugee crisis caused by the conflict in Syria, which has a destabilizing impact on the entire region. It expresses its appreciation for the significant efforts that have been made by the neighbouring countries and the countries of the region, notably Jordan, Lebanon, Turkey, Iraq and Egypt, to accommodate the more than 2 million refugees who have fled Syria.

“The Security Council reaffirms the importance of the principle of non-refoulement, the right for refugees to return voluntarily to Syria and encourages countries neighbouring Syria to protect all people fleeing the violence in Syria, including Palestinians. It urges all Member States, based on burden sharing principles, to support these countries in assisting refugees and affected communities. The Council underlines the need for all parties to respect and maintain the security and civilian character of camps for refugees and internally displaced persons.

“The Security Council also urges all Member States to respond swiftly to the United Nations’ humanitarian appeals to meet the spiralling needs of people inside Syria, in particular internally displaced persons, and Syrian refugees in neighbouring countries, and to ensure that all pledges are honoured in full. It further urges all Member States, in coordination with international financial institutions and United Nations agencies, to increase their support to address the increasing political, socioeconomic and financial impact of the refugee crisis on hosting countries.

“The Security Council emphasizes that the humanitarian situation will continue to deteriorate in the absence of a political solution to the crisis, reiterates its endorsement of the Geneva communiqué of 30 June 2012 (Annex II of resolution 2118 (2013)) and demands that all parties work towards the immediate and comprehensive implementation of the Geneva communiqué aimed at bringing an immediate end to all violence and violations and abuses of international law, and facilitating a Syrian-led political process leading to a transition that meets the legitimate aspirations of the Syrian people and enables them independently and democratically to determine their own future. It reiterates the need to convene as soon as possible an international conference to implement the Geneva communiqué in order to facilitate a Syrian-led political process leading to a transition that would hasten an end to the conflict in Syria.

“The Security Council requests the Secretary-General to regularly inform the Council about the humanitarian situation in Syria and its impact on neighbouring countries, including on progress towards implementation of the specific steps outlined in this presidential statement.”